Libya - Khalifa Haftar's Repressive Proto-State and the 'Myth' of Stability 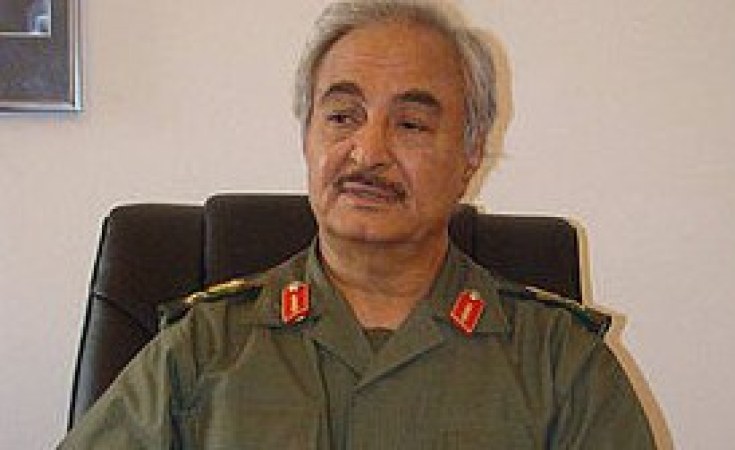 The Libyan authoritarian's aims extend far beyond his claims to be ridding the country of Islamists. And that's exactly what his foreign backers want, analysts say.

As fragile Libyan ceasefire talks make fitful progress in Geneva, Khalifa Haftar's offensive to capture Tripoli -- controlled by militias and the seat of the UN-backed government of Fayez Sarraj -- enters its 11th month.

But after Haftar derailed reconciliation talks between the rival governments in the East and West by launching his assault in April last year, his style of rule and extent of foreign support indicate he is unlikely to bend towards sharing power.

Since 2014, Haftar has taken control of most of the country with the end goal of "purging" Libya of all "terror" and "criminal" groups and bringing security and stability back to the country.

In consolidating his authority he has followed in the footsteps of Egypt's president Abdel-Fattah el-Sissi, labeling anyone who opposes his rule terrorists or enemies of the state.

The militias and trained soldiers he has corralled under the banner of the Libyan National Army (LNA) have penetrated key sectors of the economy, just as el-Sissi's military controls around half of Egypt's.

Before Haftar took Benghazi, in the country's east, in 2017, physical security was a real concern, with radical Islamist groups wreaking havoc on the city, Harchaoui said.

Since then, taking power there and in other cities and imposing strict military rule, some stability has returned, Haftar's supporters say. Residents are, however, subject to severe restrictions on freedom of expression.

In central coastal towns that have repeatedly changed hands since 2014 residents told Middle East Eye they were relieved that things have settled down. "It really is better under the LNA, and the soldiers have become very polite," one local said. He also said no one was allowed to speak out against Haftar or his forces.

But a recent New York Times report painted a picture of Benghazi as a city where residents feared arbitrary arrest by ever-present secret police and complained of corruption and extortion by militia leaders, abductions and detentions without trial.

Writing for the Italian think tank Istituto Affari Internazionali, Libya analyst Mattia Giampaolo said Haftar's embryonic state was "reflective of what Libya would likely look like under his control."

Activists and prominent politicians have been disappeared or forced to flee. Human Rights Watch (HRW) said that as the LNA entered Benghazi it committed atrocities that could amount to war crimes.

HRW has reported similar violations in the areas under the western militias' control.

Reports from Libya's East also indicate that rather than purge radical Islamists, he is co-opting them under his command.

According to the New York Times report, Salafist preachers in Benghazi call for absolute obedience to Haftar and have imposed a strict religious doctrine on Libyans.

One local who spoke to Middle East Eye said imams had been ordered by the eastern government to mention Haftar in their sermons. "To my mind, they shouldn't mention Haftar in mosques, like he's a god or something," he said.

The International Crisis Group reported in April that Madkhali-Salafis -- a branch of ultra conservative Sunni Islamists originating in Saudi Arabia -- were a key component of the LNA's efforts to take Benghazi and Tripoli and had taken control of religious institutions to push an uncompromising form of sharia.

Madhkalis reject political participation and advocate for an absolute ruler, in opposition to the politically active ideology supported by the Muslim Brotherhood that Egypt's el-Sissi has outlawed and which Sarraj's ally Turkey has sympathy with.

Why does Haftar have international support?

Harchaoui said Haftar has been able to maximize support from foreign backers by selling them an image of an authoritarian warlord who can bring stability to Libya and wipe out any kind of political Islam that may serve as an example to the populations of some of his allies.

Egypt has supported his project since 2014 with arms, airstrikes and access across the shared border so as to protect Egypt's west from Islamists in Libya's east.

The United Arab Emirates soon joined Egypt to supply Haftar with arms and became his most important backer. The UAE flew around 100 shipments to the LNA this year alone, in contravention of a UN embargo.

Both of those countries are concerned that a Libya without a strongman -- and that was allowed to form a government that included political Islamists -- could provide inspiration for a regional uprising that might threaten their rule, Harchaoui said.

As a close ally of the UAE, France's quiet cultivation of Haftar is not just directed at counter-terrorism efforts in a region where its military projects are suffering. "What they want is basically another Egypt, they want an el-Sissi kind of regime in Tripoli," Harchaoui said.

Russia has also backed him with mercenaries and money in the hope of geopolitical influence in the southern Mediterranean, while US President Donald Trump expressed his support after being encouraged by Egypt's el-Sissi.

As Hafter suppresses potential rivals, the question of who might replace him makes further instability likely and the goals of his foreign sponsors unsustainable, Harchaoui said. Hafter, who is 75, reportedly had a stroke in 2018.

"His sons cannot take over for him because they are not going to be accepted in the same way as their father ... It's a very painful question for the pro-Haftar states."

In addition to the uncertainty of who might succeed him, Haftar's image of stability rests on empty promises, Giampaolo said. Citing the weak cohesion of the forces under Haftar's command, a lack of strong state institutions and a level of repression that would likely result in further uprisings, promoting "stability through authoritarian rule is a short-term solution at best," Giampaolo said.

"International actors, and particularly European member states, would do well to heed this warning and not repeat the old mistake of investing in the myth of authoritarian stability."

UN Envoy Steps Down As Stress Takes Its Toll