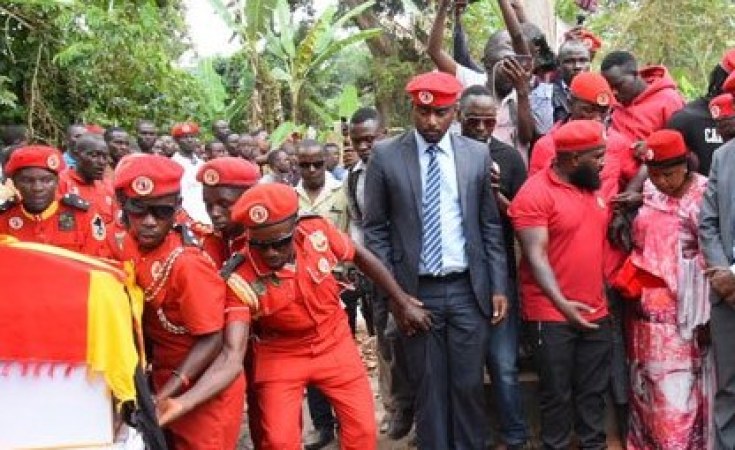 Addressing mourners at Nabukenya's burial in Nabwendo Village, Muwanga Sub-county in Kiboga District yesterday, Bobi Wine said police lied to the public in a statement on Monday that the killer vehicle did not belong to them.

"Police killed Ritah (Nabukenya). If they are denying, let them bring CCTV footage to defend their position on this," Mr Bobi Wine said.

"People have been killed in such ways and they (police) come out to deny and lie to the people but we are watching. Each and every person who is here is a candidate of death from the regime. I repeat this, (President) Museveni's regime killed our comrade," he added.

However, last evening, police spokesperson Fred Enanga said the CCTV at the scene in Nakawa Division was faulty at the time of the accident.

"At the time of the incident, the network of the CCTV camera at that place was off and it did not have power until 10pm in the night. We are, however, still assessing the incident to see if we can retrieve some information from the cameras close to it. When we get the footage, I will share it with you," Mr Enanga told Daily Monitor last evening.

They said Nabukenya fell down and the police vehicle ran over her. The witnesses said the police continued pursuing the boda boda rider to arrest him but after a futile chase they returned to the scene and took the severely injured Nabukenya to Mulago Hospital, where she succumbed to injuries upon arrival.

The statement reiterated the police account issued shortly after the incident on Monday.

"In furtherance to our holding statement of 24/02/2020, the additional findings indicate that on the 24/02/2020, at around 7:30am, a police motor vehicle Land Cruiser under Reg Number UP 4841 was driving on Naguru Road behind Nakawa Market.

"In between it was overtaken by a speeding boda boda that was carrying a passenger. Unfortunately it came into the path of an oncoming boda boda from the opposite direction, resulting into a head-on crash.

"The boda boda that was with the victim fell down, including the victim, when the two motorcycles collided in front of the police 999 patrol car. The oncoming boda boda staggered a bit and the rider sped off from the scene. All the three had no helmets," the police statement read in part.

Bobi Wine also castigated police for killing other supporters of his People Power movement in the past but have never produced a CCTV footage despite claiming they had evidence that clears them of culpability.

Police denied Ziggy Wine had been kidnapped and tortured to death as his family members and some local leaders had claimed. Police insisted the People Power supporters had succumbed to injuries sustained in an accident.

Bobi Wine said in August 2019, he witnessed a police car, registration number UP 2525 knock down his supporter Hakim Ssekamwa in Luweero Town and he later died.

In August 2018, he continued, his driver Yasiin Kawuma was shot dead by security agencies on the eve of Arua Municipality parliamentary by-elections. Bobi Wine said he had been the target.

In July 2018, he said another supporter, Moses Ramathan Walyendo was shot dead in Bugiri District during the parliamentary campaigns by Opposition Jeema President Asumani Basalirwa who later won the election.

In September 2018, People Power artiste Hannington Ssewankambo, aka Sweet Pepsi, was beaten by security officers in Kasangati and taken to hospital. About a year later, he died.