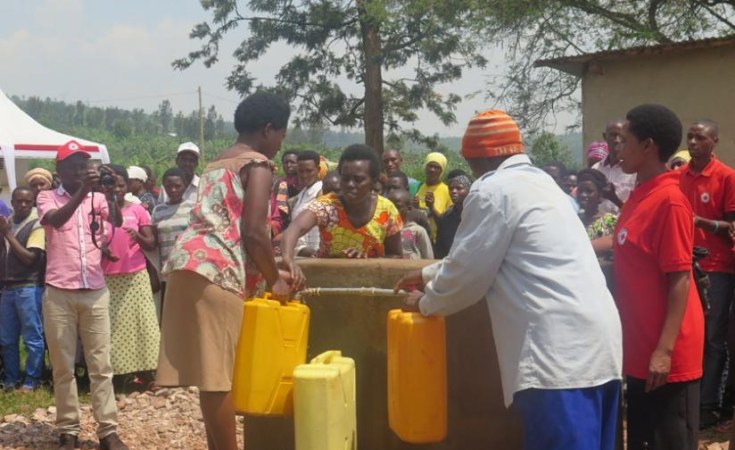 Unsafe drinking water and household air pollution are major causes of illness and death around the world. This is also the case in Rwanda, where most people living in rural areas drink untreated water and burn firewood on open stoves to cook their meals. More than 80% of Rwandans rely on firewood as their primary fuel source.

After neonatal disorders, pneumonia and diarrhoeal disease are the two leading killers of children under five years of age in Rwanda. Unsafe drinking water is the leading cause of diarrhoeal disease. And cooking indoors on open-fire stoves, with fuel such as wood and charcoal, has been linked to pneumonia, low birth weight and impaired development in children.

There have been many efforts to address these environmental health issues, but they often lack the financial support to be sustained in the long term.

In 2011, we came together as government, implementers and independent evaluators to design and study a programme that would address these environmental health challenges in Rwanda. It would need to be both sustainable and scalable.

The programme was financed and led by DelAgua, a UK-based water test kit company, in partnership with the Rwanda Ministry of Health. It was branded "Tubeho Neza", which translates to "live well" in Kinyarwanda an official language of Rwanda.

DelAgua and the Ministry of Health evaluated which technologies could most effectively reduce drinking water contamination and indoor air pollution. They needed to be technologies that people would adopt, were durable, and could be maintained easily by community health workers.

To become financially sustainable, we wanted the project to be eligible for carbon credits under the United Nations Clean Development Mechanism. By reducing wood fuel demands, the project could earn revenue through the generation and sale of these carbon credits.

DelAgua and the Ministry of Health, after certification by the Rwanda Bureau of Standards, decided to use the Vestergaard Frandsen LifeStraw Family 2.0 household water filter and the EcoZoom Dura portable wood-burning cookstove.

A 2012 pilot demonstrated the viability and impact of this programme: households started, and continued, to use the water filters and cookstoves. These findings led to a larger roll-out which started in 2014.

Working with the Rwanda National Police and the Ministry of Health, DelAgua reached over 101,000 households with the water filters and cookstoves. In 2015 they distributed an additional 250,000 cookstoves to nearly a million more people.

Community health workers advised communities and households about proper use of the products. They then visited each household regularly for a year after the distribution to encourage adoption and perform any repairs that were needed.

From 2012 to 2016, the London School of Hygiene and Tropical Medicine and Emory University evaluated the programme. They looked at the design, adoption rate and impacts on water quality, air quality, respiratory disease and diarrhoea, as well as the carbon credit financing mechanism.

This project study was published in 2019 and showed promising results. Among children under five years of age, the intervention reduced seven-day prevalence of reported diarrhoea by 29% and acute respiratory infection by 25%.

As expected, drinking water quality improved, probably explaining the impact on diarrhoea. But people's exposure to fine particulate matter in the air (measured with personal exposure sensors) remained unchanged, despite increased outdoor cooking with the improved cookstoves. This is consistent with other research that found no protective effect from cooking on improved biomass stoves, such as the Tubeho Neza.

But the study also found that people used the products less over time, as reinforcement by the community health workers became less frequent. As correct, consistent use is essential for achieving health benefits, it is unclear whether the protective effects can be sustained in the absence of regular visits and engagement with households.

Beyond the directly measured health impacts, the people who implement the products also analysed the overall programme costs and benefits. There were savings in fuelwood - an estimated 65,000 tons, enough to reverse deforestation in the region for a few years. Over five years the total programme cost was nearly US$12 million and the total benefit was estimated at over $66 million.

These results suggest that the programme was cost-effective in reducing wood fuel use, improving drinking water quality, and reducing risk of diarrhoea and respiratory illness among children under five.

As long as these products are still in use, DelAgua earns carbon credits which are then sold to the World Bank and other buyers. The aim to is to benefit private sector investors and to support the programme's continuation.

The water filters and stoves used in the trial are nearing the end of their lifetimes and it does not look as if they can be replaced, given the weak carbon credit market. As a result, DelAgua has transitioned to a focus on carbon-credit subsidised retail sales of these products in Rwanda.

Over the same years as this programme in Rwanda, there were several other large-scale trials of water, sanitation and hygiene interventions in low-income settings. They indicated little or no impacts on health. Similarly, a study of community hygiene clubs in Rwanda - designed to improve awareness without providing any products - showed no impact on health.

Cleaner fuels, such as liquefied petroleum gas, may offer a potential solution to further improving air quality, and are being evaluated in a multi-country trial that includes Rwanda. But accessibility and affordability of such fuels will continue to be a challenge in many settings.

In contrast, the Tubeho Neza programme has showed that it is possible to provide interventions against major diseases to vulnerable households at scale and to secure their adoption and consistent use. It also demonstrated the efficiency of combining critical environmental interventions at the household level. This achievement can inform other national efforts.

Evan Thomas led a team in design and implementation of the programme, Jean de Dieu Ngirabega represented the Ministry of Health, while Thomas Clasen's team independently studied its impacts.