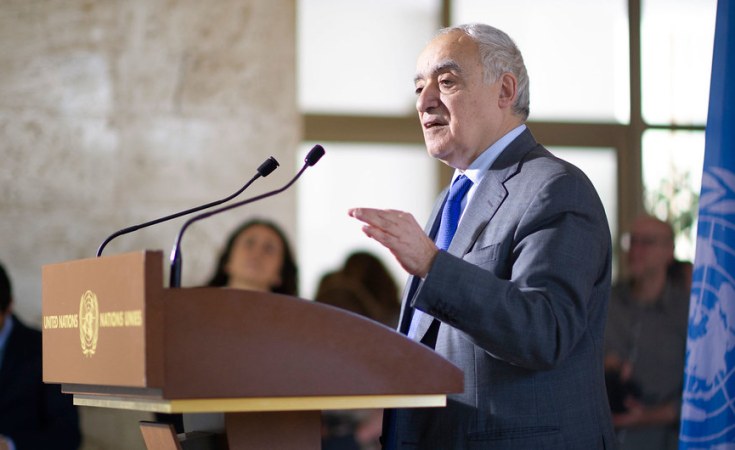 Violaine Martin/UN Photo
Ghassan Salamé, Special Representative of the Secretary-General and Head of the UN Support MIssion in Libya, briefs the press at the meeting of the 5+5 Libyan Joint Commission in Geneva in February 2020.
UN News Service

The second round of the United Nations-facilitated talks to end fighting in Libya concluded on Sunday in Geneva with "seriousness of purpose and goodwill" in Geneva on Sunday, the UN said today.

Ghassan Salamé, Special Representative of the Secretary-General and Head of the UN Support Mission in Libya (UNSMIL), together with delegates from the UN-recognized Government of National Accord (GNA) and the Libyan National Army (LNA) participated in the 5+5 Libyan Joint Military Commission (JMC) talks.

Appraising parties' spirit of high professionalism during the discussions, UNSMIL said a draft ceasefire agreement to restore security to civilian areas with the implementation of a joint monitoring mechanism under the auspices of UNSMIL and the JMC had been prepared.

The two parties will present the draft agreement to their respective leaderships for further consultations and resume discussions next month to complete the preparation of the Terms of Reference of the sub-committees in charge of the implementation of the agreement.

UNSMIL reiterated its call for both parties to fully abide by the current truce and the protection of civilians, properties and vital infrastructure.

Launched by UNSMIL, the JMC is part of the three-track intra-Libyan process aiming to reach a lasting ceasefire by addressing the economic and financial situation, military and security matters, and political dialogues.