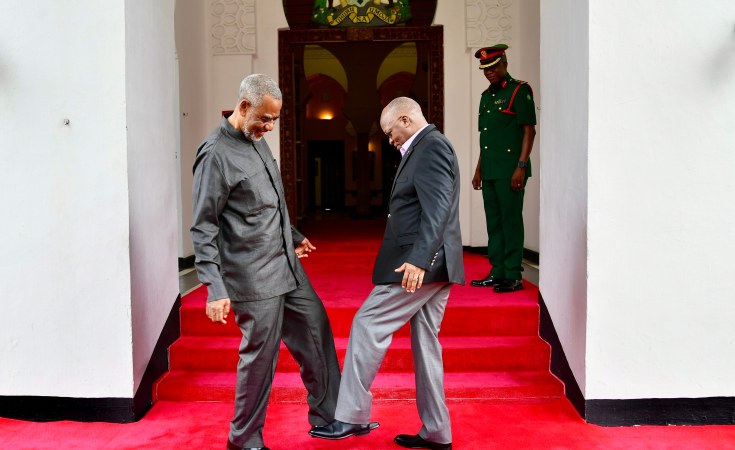 State House
Veteran opposition politician Seif Shariff Hamad from Zanzibar and President John Magufuli greet each other with their feet amid fears of the spread of COVID-19.
The Nation (Nairobi)
By Angela Oketch

A shortage of drugs and face masks may hinder any fight against coronavirus if the deadly disease reaches Kenya, an investigation by the Nation has revealed.

Thousands of masks are said to have been re-exported from Kenya to China, where at least 70,000 people have been infected with the virus, while drugs needed to manage the disease are dwindling as factories in the Asian country are not manufacturing them fast enough.

The masks have been moved from Kenya though the country does not have enough of them to contain an outbreak.

The Pharmacy and Poisons Board had earlier stopped re-exports of masks to China, noting that Kenyans would need them should there be an outbreak, but a senior government official vetoed the decision, according to a source in the Health ministry.

After the Chinese government made an export application online, it was declined on the condition that Kenya is also at risk and not enough masks are in the market.

The Chinese then went the diplomatic way and Kenyan officials were ordered to release the masks.

An insider at the Ministry of Health told the Sunday Nation that immediately after the orders were declined, senior officials were summoned and asked to approve the deal.

It was done thereafter and the masks were flown to China under the condition that Kenya has had favourable trade dealings with the Asian nation.

The Nation has learnt that since Thursday, business people have been moving from one supplier to another buying the items, assembling and exporting them to China.

"The Chinese are buying the best masks in the market, the N95, yet supplies are in shortage,'" says the insider.

The N95 respirator, an industrial-purpose face mask, is in huge demand as people seek to protect themselves from the coronavirus. The few available are also flying off the shelves.

Shopkeepers have hiked prices to capitalise on the situation. The cost of a 50-pack box of masks that was selling for Sh200 before the outbreak has shot to Sh1,000.

Interestingly, 70 per cent of masks now used in Kenya, especially surgical ones, are imported from China.

China is the world's largest producer of face masks and according to National Development and Reform, the country is operating below capacity by producing 76 per cent of the items. It has, thus, resorted to importing them.

China is producing about 15.2 million masks daily but demand is estimated at 60 million units, according to Chinese media reports. China has imported more than 1.2 billion masks to meet soaring demand.

Contacted for comment, the Chinese Embassy in Kenya was cagey in its response.

"We highly appreciate all the support by Kenyan government and people provided to Chinese people during the time of fighting the epidemic, and will remember deep in our heart. For more details, you are kindly advised to enquire from the Kenyan authorities," read an email sent to Sunday Nation.

"What is of importance to me now is to ensure that all facilities that are needed in the country, including masks, are available. These are part of the preparation that the country is making now. We need to be prepared and focused in case of any eventuality," he said.

Kenya Medical Supplies Agency chief executive Dr Jonah Mwangi said though there are enough masks, the agency has started the process of procuring a million more to be on the safer side.

"We currently have enough masks in stock, though we are adding more just to be sure that we have enough should there be a crisis," Dr Mwangi said.

Despite Kemsa's assurance, experts have warned that most countries, including Kenya, are likely to experience a shortage of drugs and an increase in their pricing in the next few weeks as the outbreak continues to afflict China's manufacturing and overseas trade.

Many Chinese factories closed due to the coronavirus crisis and as they resume production, a majority are operating at reduced capacity.

Shipping has also been interrupted. Many nations, Kenya included, that depend heavily on imports of some raw materials and intermediate goods from China continue to face uncertainty.

According to data seen by the Sunday Nation, 83 per cent of drugs consumed in Kenya are imported, with only 17 per cent manufactured locally. The country relies heavily on China for active ingredients that go into antibiotics, heart medicines and other drugs.

The fear of the virus spreading throughout Africa and Kenya is still high. Africa has recorded its first three cases in Egypt, Algeria and Nigeria.

Kenyatta National Hospital was forced to deny that it had reported a case of coronavirus.

Nairobi is now ranked sixth among African cities whose populations are at high risk of being infected with the Covid-19 virus.

This is emerging even as government bureaucrats last week allowed in travellers from 18 high-risk cities in mainland China.

Last Wednesday, Kenya allowed 239 passengers who had arrived aboard a China Southern Airlines flight from Guangzhou.

It took a court order for Kenya to temporarily stop flights from China. More countries globally have stopped flights from the country and placed quarantines on visitors from affected regions, but Ethiopia has been staunch in its refusal to restrict China-bound flights.

The Covid-19 coronavirus outbreak has infected over 85,000 people globally and killed 2,900 others, according to the World Health Organization, which said the rapidly spreading disease had attained "pandemic potential", forcing more countries to impose barriers in efforts to keep it at bay.

In the US, President Donald Trump has declared a public health emergency that will temporarily bar foreign nationals who have travelled to China within the last 14 days -- other than immediate family members of citizens and permanent residents -- from entering the country.

A Lancet report on the preparedness and vulnerability of African countries against importations of the virus shows that Kenya, Nigeria, Ethiopia, Sudan, Ghana and Tanzania are ill-prepared to detect imported cases of the virus.

The report is affirmed by assertions from WHO that a survey to assess African countries' overall readiness for Covid-19 found the regional readiness level at 66 per cent.

Dr Matshidiso Moeti, WHO regional director for Africa, said there are critical gaps in readiness for countries across the continent to tackle the virus.

"We need to prioritise strengthening the capacities for countries to investigate alerts, treat patients in isolation facilities, prevention and control in health facilities," she said.

Most countries in Africa have stepped up their preparedness to detect and cope with importation of the virus.

The Kenyan government has, however, insisted that there is nothing to worry about as the country can test and treat any cases detected in Kenya.

COVID-19 Health Tips - Take Care of Yourself and Protect Others

Ethiopia Bans Public Events as COVID-19 Cases Rise
Tagged:
Copyright © 2020 The Nation. All rights reserved. Distributed by AllAfrica Global Media (allAfrica.com). To contact the copyright holder directly for corrections — or for permission to republish or make other authorized use of this material, click here.