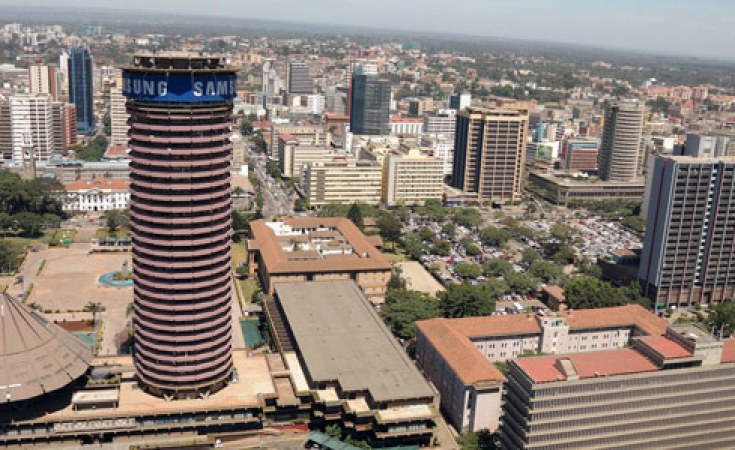 Salaton Njau/The East African
A view of the Nairobi skyline.
The Nation (Nairobi)
By Hilary Kimuyu and Nyambega Gisesa

In an advisory dated February 26, the United States Federal Aviation Administration (FAA) urged all US-registered airlines to be cautious while overflying the Kenyan airspace.

"Those persons are advised to exercise caution when flying into, out of, within, or over the territory and airspace of Kenya East of 40 degrees East longitude at altitudes below fl260 due to the possibility of extremist/militant activity," the FAA noted.

Although the area covering East of 40 degrees East longitude is slightly out of Mombasa town, it includes the coastal towns of Malindi and Lamu, which are some of Kenya's important tourism hubs. The FAA advises airlines not to fly below 26,000 feet above sea level.

With the exception of helicopters, most commercial planes fly way above the 26,000 feet.

"Such weapons could target aircraft at low altitudes, including during the arrival and departure phases of flight, and/or target airports and aircraft on the ground, especially at airfields located east of 40 degrees east longitude."

The alert came on the heels of another one about a possible terrorist attack on a high-end hotel issued by the Kenyan police and the United States Embassy in Nairobi.

The FAA said it would review the alert by February 26, 2021. The agency had issued a similar warning in February 2019.

According to an officer from Kenya Civil Aviation Authority (KCAA) who sought anonymity because he is not authorised to speak to the media, the FAA issue these alerts when they believe there might be a terrorist threat in a region.

"These are cautionary measures issued when the FAA think there might be a threat in a certain region," the source said.

The FAA, which regulates civil aviation in the US, issues regular travel warnings in consultation with the State Department for the security of American citizens.

Somalia-based militant group al-Shabaab has conducted many attacks on Kenyan soil, especially in counties along the vast and porous border with Somalia. But they have never downed a plane.

The only known attempt to bring down an airplane in Kenyan airspace was carried out in 2002, when al-Qaeda operatives fired a missile at an Israeli plane after it took off from Mombasa's Moi International Airport. The attackers missed their target.

Before the attempt on the flight, three suicide bombers had attacked Israeli-owned hotel, Paradise Hotel in Kikambala, Kilifi County, killing 15 people and destroying the establishment.

Investigations by American, Israeli, and Kenyan intelligence teams into the hotel bombing revealed that preparations for the attack had started a year earlier in Mogadishu, Somalia.

After the attack, Australia, Britain, Canada and the US temporarily shut their embassies and issued travel advisories against Kenya, warning their citizens of insecurity in the country.

The United Kingdom suspended flights to Kenya for a month.

The US considers Kenya as a strategic ally in the region, but this alert by its agency could heavily impact the aviation and tourism sectors, which have been struggling.

Kenya has in recent years suffered attacks by al-Shabaab, who are demanding the withdrawal of Kenya Defence Forces from Somalia, where they are part of the African Union peacekeeping mission.

The country has recently seen an upsurge of terror warnings and this week, the Kenya Police and the United States embassy in Nairobi warned of an impending terror attack.

In a message on their website to its citizens, the US embassy advised them to be vigilant.

"Terrorist groups may be plotting an attack against a major hotel in Nairobi. The exact hotel has not been identified, but it is believed to be popular with tourists and business travellers," the embassy said.

Inspector-General Hillary Mutyambai has appealed to the public to share information with security agencies and assured Kenyans of safety amid fears of an impending attack in Nairobi or elsewhere in the country.

Mr Mutyambai called for extra vigilance but said the National Police Service had deployed adequately in areas at risk of attacks.

"We have enhanced police deployment in our cities, towns and particularly in those parts of the country where criminal elements have occasionally instigated criminal activities," the police boss said.

"However, we wish to caution the public to be extra vigilant even as police and other security agencies continue to work round the clock to ensure the safety of our country and Kenyans at large.

"The National Police Service has increased border surveillance to ensure criminal elements are cut from entering the country."

Around Nairobi, intelligence and mainstream security personnel have been seen around major hotels, shopping malls and public places identified as possible targets across the city.

Intelligence officers are discreetly monitoring activities in areas suspected to be easy targets.

Uniformed officers, including the Administration Police Service's Rapid Deployment Unit's commandos and GSU officers, are stationed in strategic places while others are doing the rounds in different places in Nairobi.

Earlier this week, the US said they had killed the al-Shabaab leader linked to the attack early January at a military base in Kenya used by both US and Kenyan forces in Manda Bay near the Somalia border.

The US Africa Command said the terrorist, whom they did not name, was killed alongside his wife, who was also a known al-Shabaab member, in an air strike.

The air strike, which was conducted in coordination with the Somalia government, hit Saakow, which is about 320km west of the Somalia capital Mogadishu.

Previous Story
Next Story
U.S. Warns Its Airlines of Risk of Attack in Kenyan Airspace

U.S. Warns Its Airlines of Risk of Attack in Kenyan Airspace