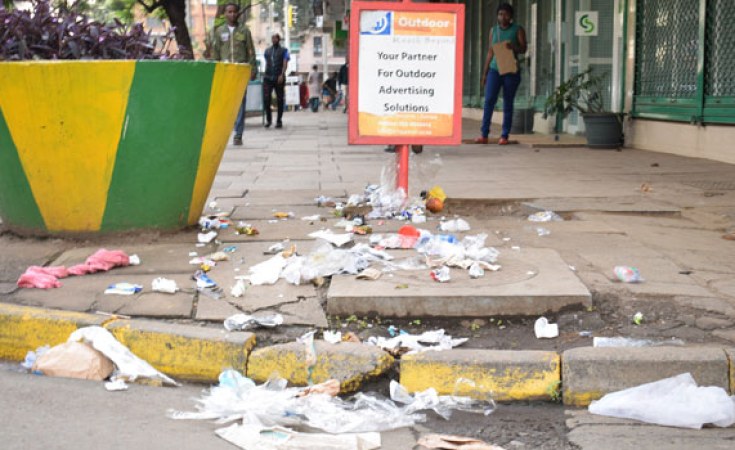 Moses Muoki/Capital FM
Garbage from bins emptied onto the streets by aggrieved workers.
The Nation (Nairobi)
By Collins Omulo and Lynette Mukami

Garbage collectors contracted by City Hall have downed their tools due to non-payment, even as the county's Finance and Environment departments trade blame over who is responsible for the mess.

The disgruntled workers, while clad in their bright red overalls, could be seen marching through parts of the Nairobi central business district (CBD) early Tuesday morning while emptying bins onto the streets.

They chanted angrily in protest, leaving roads littered with solid waste in their wake.

Nairobi County Environment Executive Larry Wambua, while confirming the protest, said that the garbage collectors contracted to collect solid waste within the CBD have gone on strike as a result of the county government failing to pay them.

Mr Wambua, however, distanced his department from responsibility over the matter, instead laying blame on the confusion currently bedevilling the Finance department over who is supposed to occupy the office.

He did not reveal the amount owed to them but said it has been outstanding for almost three months.

"I am aware of the strike which is due to non-payment for almost three months. For us as a department, we do not make payments. This is the mandate of the Finance department which has had a tussle on who is the substantive CEC," said Mr Wambua.

When reached for comment, Economic Planning Chief Officer Washington Makodingo deflected blame back to the Environment department while accusing it of failing to forward the list of contractors to be paid in a timely manner.

"The Environment department should not blame us for their incompetence because they know they have slept on the job," said Dr Makodingo.

"It is the responsibility of the Environment department to forward the list of contractors to be paid to the Finance Department. They are supposed to give us their priority in terms of payment ... they should not blame their incompetence on us," he added.

Regarding confusion at the Finance department, the Chief Officer said nothing could be further from the truth. He maintained that the department is intact and there is smooth flow of work.

"There is no confusion and nothing has stalled. We are going on with normal operations and, in fact, we are currently busy paying salaries," said Dr Makodingo.

Last month, City Hall announced it had signed a one-year renewable contract with the National Youth Service (NYS) to help in garbage collection in the capital city.

However, Environment Chief Officer Mohamed Abdi said the agreement is yet to take effect.

NYS was to begin work in five zones in the county currently lacking garbage contractors which include Roysambu, Kamukunji, Makadara, Embakasi East and Ruaraka.