South Africa: Singer Sjava Breaks His Silence - I Did Not Rape Her

Cape Town — The popular rapper Sjava has responded following reports that Lady Zamar has filed a rape case against him.

In a statement, Sjava gave a detailed description of the events that took place since the allegations were levelled against him last year.

"There are a number of reasons I have not spoken about this matter in public and chose to rather follow the legal process, kodwa (but) it has now become impossible to remain quiet. At the same time, I am only going to share information that is necessary to share due to the latest news reports. It is not my intention to stand trial by social media."

"People are saying that I made empty threats to take her to court after her allegations last year. Ngithe mina (I said) last year I would follow legal processes to protect myself. This was not a threat. Its something that anyone would do to protect themselves if they are accused of doing something that is not true."

Lady Zamar accused Sjava of being emotionally and sexually abusive. Organisers of the Cape Town International Jazz Festival announced that Sjava will no longer be part of the line-up for the popular event. 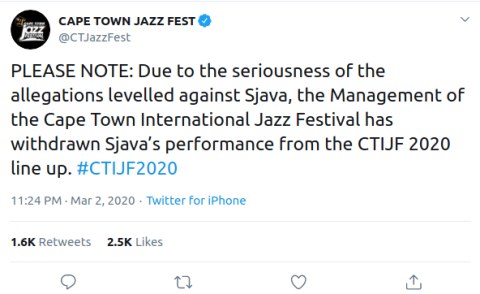 Rape Charges Dropped Against South African Musician Sjava
Tagged:
Copyright © 2020 allAfrica.com. All rights reserved. Distributed by AllAfrica Global Media (allAfrica.com). To contact the copyright holder directly for corrections — or for permission to republish or make other authorized use of this material, click here.