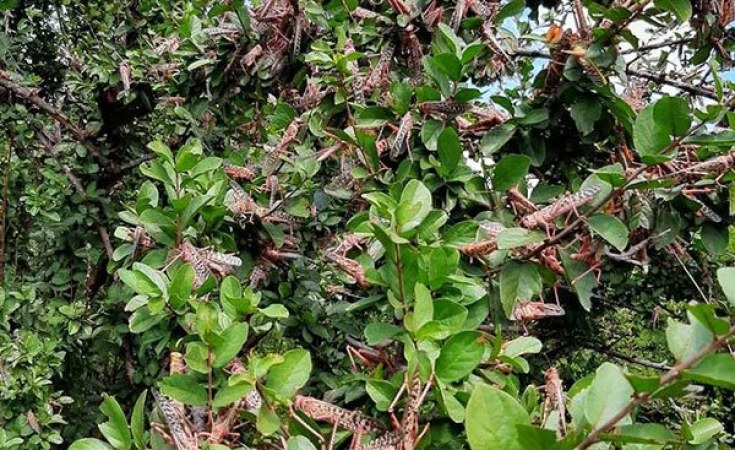 Bruhan Makong/Daily Nation
Some of the desert locusts which have invaded Gurar in Wajir North (file photo).
The Nation (Nairobi)
By Geoffrey Ondieki

A new generation of hopper bands that hatched last month in Northern Kenya has matured and ready to fly, signalling a new headache to the government as it battles locusts menace.

This is the first ever generation bred in Kenya to fly since the invasion was reported.

The voracious pests have been laying eggs along their migratory paths which started from Wajir, Mandera, Isiolo and Samburu counties.

Officials say the hopper bands could form swarms close to 100 times larger than the wave that descended in the region from neighbouring countries of Somalia and Ethiopia.

According to statistics from Samburu County Special Programmes Department, the new generation bred in Kenya, is already flying in Lekiji, Melepo Moo, Sesia and Mabati in Samburu East.

He warned that the newly hatched generation of desert locusts is about 100 times their parents' numbers and could rise to an eye-watering 500 per cent multiplication by April this year if uncontrolled.

According to the United Nation's Food and Agriculture Organisation (FAO), desert locust females, lay eggs in an egg pod primarily in sandy soils at a depth of 10 to 15 centimetres below the surface. A solitary female locust lays about 95 to 158 eggs. This means the number of new generation is estimated to be approximately 100 times the initial swarms.

For instance, if one swarm contains 100,000 prolific females and lay eggs, the number of new hopper bands could be approximately 10,000,000 per swarm. Special Programmes Department has also projected that more than 85,000 acres of vegetation cover and pasture in Samburu East have been destroyed by desert locusts.

In what looks like a new blow, officials also say the record locust swarms have now hit Samburu North devouring pasture in the area.

According to Mr Lesaigor, fresh swarms of locusts are still entering Samburu from neighbouring Isiolo and Laikipia counties. Mr Lesaigor said that three new swarms of 17 kilometres long have descended in Samburu North, and this time they are ravaging the infamous Suguta Valley in Baragoi and Malaso in the North.

Other places that fresh swarms have reportedly descended on are Mount Nyiro, Oldonyo Mara and Lojorin.

"We have received a fresh blow as hopper bands have matured and ready to fly and at the same time we have fresh invasion. Right now we are handling two types of locusts-the newly hatched hopper bands and fresh swarms. This could be the worst disaster here in Samburu as livestock could starve for lack of pasture," Mr Lesaigor added.

Left untreated, statistics from the Special Programmes Department indicate that mass hatching of another wave of hopper bands is ongoing and could develop and turn more destructive.

Previous Story
Next Story
Locust Invasion Has Been Contained - UPDF

Locust Invasion Has Been Contained - UPDF

Second, Bigger Wave of Locusts Will Plague East Africa - Experts
Tagged:
Copyright © 2020 The Nation. All rights reserved. Distributed by AllAfrica Global Media (allAfrica.com). To contact the copyright holder directly for corrections — or for permission to republish or make other authorized use of this material, click here.