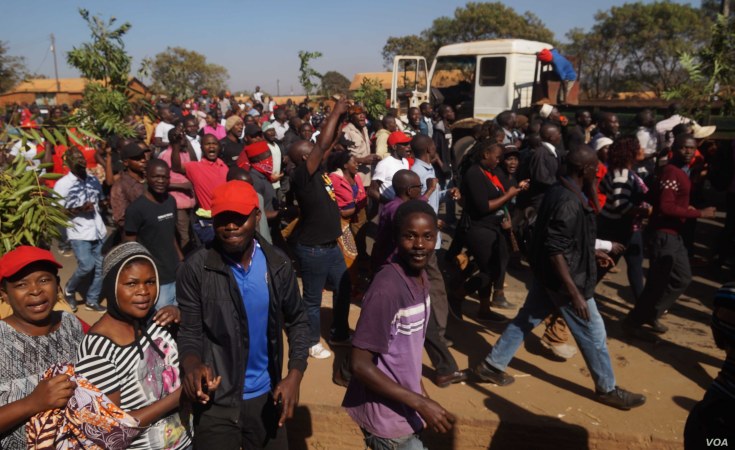 Lameck Masina/VOA
HRDC has been organizing protests like these since May which have sometimes turned violent.
Voice of America (Washington, DC)
By Lameck Masina

Pressure is mounting on Malawi's government to release three activists detained this week for planning to hold protests aimed at shutting down presidential residences.

The electoral bills propose a date for fresh elections and procedures to follow in case of runoffs.

Police say Mtambo, Trapence and Sembereka will face charges of inciting people to close state residences, under Section 124 of the Penal Code.

But Amnesty International says the arrests are a government attempt to crack down on dissenting views.

"The activists simply stated their intention, which is allowed under freedom of expression," said Vongai Chikwanda, Amnesty International's campaigner for Southern Africa. "The crime has not been committed. So are you arresting people before the crime has been committed? However, the police should have simply said, 'According to our laws, this is what the penal code says in relation to what has been proposed.' It does not warrant an arrest."

The arrests were made just hours after Mutharika denounced the planned protest at a Blantyre political rally and ordered security to stop the group.

Chikwanda said in a Whatsapp interview that such statements put the lives of activists at risk.

"We all know that Timothy [Mtambo] narrowly escaped petrol bomb attacks the last time at his home, his car was torched the last time. So these are the kind of actions that we end up seeing by those who are overzealous and you put activists' lives at risk by such threats," Chikwanda said.

Mark Botoman, the Malawi government's spokesperson, said those condemning the government are ignorant on the country's laws.

"I think you understand that Amnesty International does not live in Malawi," he said. "They may have connections in Malawi, they may be fed with information from here, but I think the context of the matter is these people have been arrested because they are suspected to have committed a crime. And in our country, whether you are a human rights defender or anyone else, including myself as a minister, if I break the law, the long arm of law can catch up with me."

On Wednesday, a court in Lilongwe denied bail to the three activists.

Meanwhile, the opposition Malawi Congress Party called for a nationwide demonstration Thursday, pushing for the release of the activists and for Mutharika to sign the electoral reforms bills.

HRDC Vows to Go Ahead to Seal State House Despite Arrests

Party Alliances Abound as Poll Rerun Looms in Malawi
Tagged:
Copyright © 2020 Voice of America. All rights reserved. Distributed by AllAfrica Global Media (allAfrica.com). To contact the copyright holder directly for corrections — or for permission to republish or make other authorized use of this material, click here.