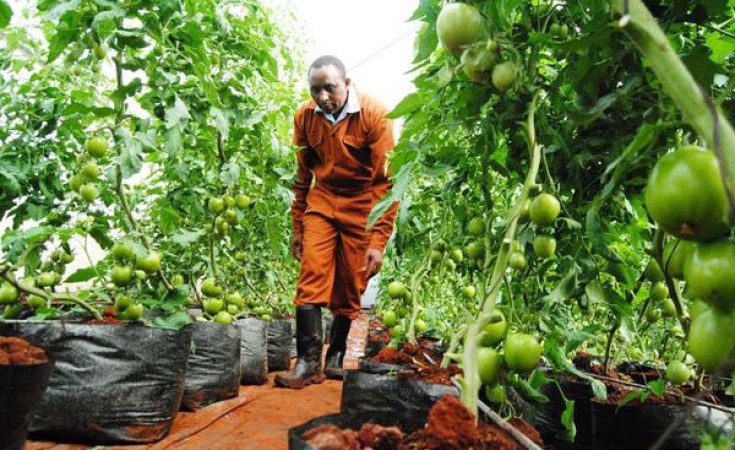 Boniface Mwangi/Daily Nation
A farmer inspects his tomatoes in his greenhouse on his farm in Mathakwa-ini in Tetu (file photo).
Capital FM (Nairobi)
By Jemimah Mueni

Despite government efforts to achieve food and nutrition security by 2022, the report ranks Kenya at position 86 out of 117 countries reviewed in the GHI.

Although there has been a slight improvement in the number of people grappling with food insecurity in Kenya, there remains a challenge.

Concern Worldwide and Welthungerhilfe, whose mission is to eradicate hunger, jointly produce the GHI report every year to track hunger levels around the world.

"The latest data available show that while we have made progress in reducing hunger on a global scale since 2000, we still have a long way to go. Of the 117 countries with GHI scores, levels of hunger are still serious or alarming in 47 countries and extremely alarming in one country," the latest report stated.

As identified by Kenya Institute for Public Policy Research and Analysis (KIPPRA), Kenya is classified as a food deficit country.

1 in every 3 Kenyans (14.5 million) suffer from chronic food insecurity and poor nutrition annually while approximately 29 per cent of the population does not attain the minimum dietary requirements to sustain a healthy and productive life.

Alarming levels of hunger exist in four countries namely Chad, Madagascar, Yemen and Zambia. Central African Republic is the only country where hunger is classified as extremely alarming.

The reports shows hard won gains are being threatened by extreme poverty, poor governance and climate change resulting in growing number of people suffering from hunger.

Climate change has been single out in the report as an increasingly relevant threat to the world's hungry and vulnerable people that require immediate action.

"This year Global Hunger Index highlights the inextricable link between hunger and climate change and the shared urgency of solving two of the world's greatest challenges," the GHI report indicated.

Extreme weather conditions are said to have jeopardized food production and food security.

Previous Story
Millions of Kenyans Go Hungry Every Day. Why, and What Can Be Done
Next Story

Millions of Kenyans Go Hungry Every Day. Why, and What Can Be Done