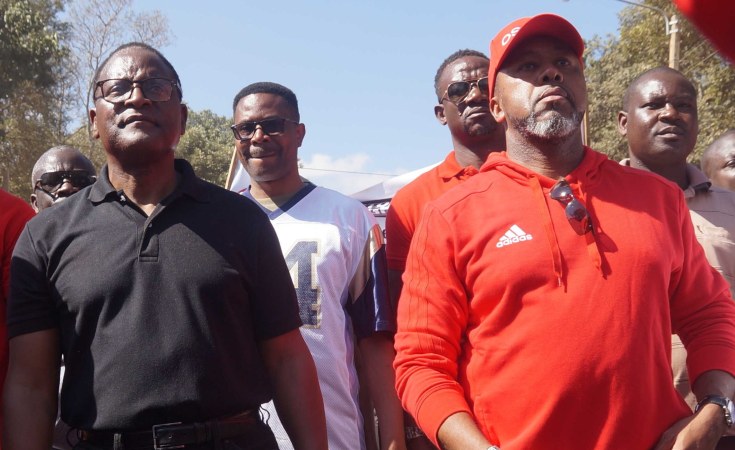 A local renowned governance commentator has said the absence of a clear succession path often leads to political parties losing political direction, saying the governing Democratic Progressive Party (DPP) is sailing through similar problems despite the party concealing infighting over who will succeed President Peter Mutharika.

Nankhumwa (r) speaking to President Mutharika: Character assassins in the party are creating all sorts of things against me

There have been spirited efforts to douse the flames of infighting in DPP to take over the party leadership, but matters are coming in the open, with governance commentator Makhumbo Munthali saying remarks by DPP vice-president (South) Kondwani Nankhumwa condemning some of his party members of being gossip mongers signal fragmentation in DPP.

"Those remarks are a clear sign of the prevailing divisions in the party around either the running mate issues or leadership succession plan," said Munthali.

Nankhumwa, who is also Minister of Agriculture, Irrigation and Water Development, said there is character assassination in the party and that he us one the targets of people that do not wish him well.

He was speaking in Chikwawa where President Peter Mutharika was launching the K167 billion Shire Valley Transformation Programme, in a speech monitored on private-owned Times Television.

"When I spoke quoting the Bible during the rally held at Njamba, Blantyre [on Sunday], some people questioned why I was doing this when this is the time for fighting, but you have to know that even in the army they have a chaplain meaning that they, too, pray before going to war.

"I want to make it clear that I will continue quoting the Bible because that is the way I am and I will never raise my voice when speaking. I will continue conducting myself in the manner I have always been," Nankhumwa said before he spoke briefly about the launch of the programme.

Nankhumwa, who is also Leader of the House in Parliament, also condemned some people who reportedly manipulate his photographs to portray him as being in the company of UTM officials.

"Unfortunately, such people are in the party [DPP] but there is no way I can join either MCP or UTM. They have even gone ahead to suggest that all my positions, including that of Leader of the House, will be taken away from me. However, when it shall please you to remove me as a minister, I will accept it because that is your prerogative," Nankhumwa said.

"Let me warn these gossipers that when a lion is asleep, it does not mean that it is dead. Let us stop spreading these lies. My message is that ahead of the election, I shall rise together with the President and, in the event that, God forbid, we don't make it, fall together, pack up and go into farming."

President Mutharika has already been on record condemning political posturing in the DPP, saying the party must work together and "wait until 2023 when, as DPP, we will choose a candidate to replace me [at a convention]."

The DPP has since former an electoral alliance with United Democratic Front (UDF) but it is not clear if Mutharika will pick a running mate from UDF or maintain Everton Chimulirenji in the forthcoming fresh presidential election.

Could COVID-19 Move Landmark Presidential Election in Malawi?
Tagged:
Copyright © 2020 Nyasa Times. All rights reserved. Distributed by AllAfrica Global Media (allAfrica.com). To contact the copyright holder directly for corrections — or for permission to republish or make other authorized use of this material, click here.