Nigeria: Lagos Explosion Kills Principal, Students, Family of 4, Many Others 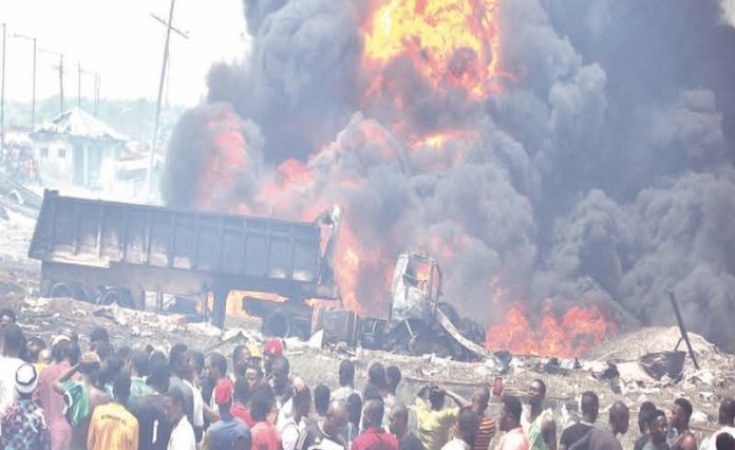 This Day
At least 17 people died and scores of others suffered varying degrees of injuries in an explosion in Lagos on March 15, 2020.
Daily Trust (Abuja)
By Eugene Agha, Abdullateef Aliyu, Muideen Olaniyi, Abdullateef Salawu

Lagos, Abuja — Many people, including a principal and some students of a boarding school, died yesterday in a pipeline explosion that rocked Abule-Ado area of FESTAC in Amuwo Odofin Local Government Area of Lagos State.

Residents scampered for safety as the massive explosion destroyed over 50 buildings and many vehicles.

About two months ago, a similar explosion at Abule Egba had killed two persons and displaced over 300 residents.

Among the buildings affected by yesterday's explosion was Bethlehem Catholic Girls' High School, a boarding school in the area. The principal, identified as Henrietta Alokha and some students lost their lives.

The school was said to be holding the morning mass when the explosion occurred. Many students ran for safety and sustained injuries.

Also, a family of four got trapped in the inferno and died.

Although emergency officials put the casualty figure at 15, witnesses put it at over 24.

The National Emergency Management Agency's coordinator for the southwest, Ibrahim Farinloye, said the explosion started far away from the pipeline.

The combined team of the Lagos State emergency Management Agency, the state fire service, the Federal Fire Service, the Nigeria Navy Fire Tender and the NEMA battled to contain the fire.

One of our correspondents counted seven bodies, wrapped in bags, that were moved into a waiting ambulance belonging to the Lagos State Medical Ambulance Service.

A resident, Kareem Alabi, said the death toll could be as high as 25, given the rate at which the fire spread.

He said he counted the bodies of 11 adult males, five adult females and a female child.

He said over 50 houses and six vehicles were razed.

Another resident who identified, Nkechi Onuigbo, said worst hit were students of Bethlehem Girl's High School, trapped in their dormitory.

She said that also affected was a Lagos State Government Technical School.

LASEMA Director-General Dr Olufemi Oke-Osanyintolu said investigation had commenced to ascertain the cause of the explosion, advising people not to panic and disseminate false information.

He said those injured were being taken care off while the number of casualties would be made public at the end of the recovery exercise.

The Nigerian National Petroleum Corporation said the explosion occurred when a truck hit gas cylinders around the corporation's pipeline right of way.

Its spokesman, Kennie Obateru, said sequel to the report of the incident, the NNPC quickly halted ongoing pumping operations on the Atlas Cove-Mosimi pipeline active at the time.

He said the temporary shutdown of the petroleum products pipeline would not affect the normal supply of products to the Lagos and its environs.

President Muhammadu Buhari yesterday condoled with victims' families and all those affected by the explosion.

Buhari, in a statement issued by his spokesman, Garba Shehu, said a misfortune of whatever scale anywhere is a tragedy to the country.

He also commiserated with the Lagos State Government and all residents affected by the unfortunate incident which left many injured and destroyed property.

Meanwhile, Senate President Ahmad Lawan has called on the relevant authorities to investigate the explosion.

Lawan, in a statement by his spokesman, Ola Awoniyi, condoled with all those who lost loved ones, the injured and those who lost property to the inferno.

He commiserated with the Lagos State Government over the tragic incident and prayed to God to comfort all those affected.

Similarly, the All Progressives Congress' national leader, Asiwaju Bola Tinubu, said in victims' memories and to avert a reoccurrence, the authorities must get to the root of the inferno.

Condemning the incident, Tinubu, in a statement by his spokesman, Tunde Rahman, commiserated with the victims' families and relations.

He said all those who had a hand in the incident must be punished no matter how highly placed.

He said: "This tragedy shouldn't have happened. Those who lost their lives in the unfortunate incident did not deserve to die so gruesomely."