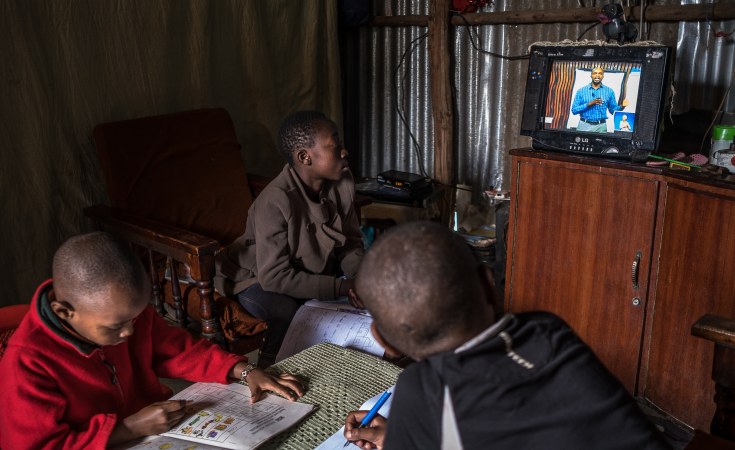 Brian Otieno/Unicef
12-year-old Elizabeth and 10-year-old Justin follow a Social Studies lesson on the EDU TV while doing their revision at home in Kibera. Justin's brother, Morara who is in the kindergarten doodles on an exercise book. Elizabeth is in Standard 6 and Justin is in Standard 5, "I am familiar with most of the topics the teacher is teaching" he said.
The Nation (Nairobi)
By Nasibo Kabale

Learning at all levels has been suspended indefinitely as President Uhuru Kenyatta unveiled measures to stop the spread of coronavirus following the confirmation of two new cases on Sunday.

The President announced a nationwide partial lockdown and encouraged businesses and government offices to close all non-essential services, a testament to the coronavirus pandemic's profound impact on daily life.

"We have suspended learning in all our education institutions with immediate effect. Consequently, and to facilitate a phased approach, primary and secondary day schools are to suspend operations from tomorrow.

"For those in boarding schools, the school administration should ensure students are home by Wednesday, while universities and tertiary institutions are to close by Friday," President Kenyatta said.

He also suspended travel for all persons coming into Kenya from any country with reported cases.

Mr Kenyatta said that only Kenyans and foreigners with valid residence permits will be allowed to come in provided they proceed on self-quarantine or to a government-designated quarantine facility.

"This will take effect within the next 48 hours to cater for any passengers who may be en route. This directive will remain in effect for the next 30 days or as varied by the National Emergency Response Committee," he said.

To avoid the risk of transmission through physical handling of money, Kenyans have been encouraged to make use of cashless transactions such as mobile money and credit cards.

"We appeal to mobile operators and banks to take into consideration the situation and reduce the cost of transactions during this period," the President said.

Hospitals and shopping malls have also been urged to provide soap, water and hand sanitisers and ensure that all their premises are regularly cleaned and disinfected. The extraordinary moves came just days after officials reported the first confirmed case of the virus.

The first patient, a 27-year-old female, is said to have been in contact with 27 people. Two of them have tested positive.

The woman was taken ill seven days after travelling back from the US via London on March 5.

There are now 14 countries in Africa with confirmed cases of the virus that has swept through the globe, infecting more than 130,000 people and killing nearly 5,000. But to date, the continent has been spared the worst of the pandemic.

Only five people have succumbed to Covid-19 so far -- all in North Africa -- with the sub-Saharan region recording no deaths and very low numbers of confirmed cases.

President Kenyatta said the measures may cause inconvenience, but are designed to ensure that Kenya effectively contains the spread of the virus.

Kenya Union of Post-Primary Education Teachers (Kuppet) welcomed the directive to close down all schools.

However, Kuppet Secretary-General Akelo Misori asked parents to be vigilant and ensure that children are protected at home too.

"Parents must monitor the interactions of their children while at home," said Mr Misori who also announced that activities in Kuppet offices across the county will be suspended from Monday.

The Head of State's directive comes at a time when the World Health Organisation (WHO) has encouraged African nations to scale up their emergency preparedness or response, saying cases may still be low in Africa "and we can keep it that way with robust all-of-government actions to fight the new coronavirus".

"Every country can still change the course of this pandemic but containment remains the most appropriate strategy for African countries. Apart from South Africa and Algeria -- which have clusters of transmission linked to imported cases -- the confirmed Covid-19 cases in the African region are sporadic importations from European countries -- mainly Italy, France, Germany and Spain," said Dr Matshidiso Moeti, WHO regional director for Africa.

She added that to focus on containment in this narrowing window of time, the WHO regional office is shifting from readiness to response.

In countries with confirmed cases, efforts are under way to trace people who may have come into contact with those confirmed to have the virus.

Efforts to support countries as they bolster essential early detection and surveillance capabilities at their ports, airports and land crossings are under way, Dr Moeti said.

Hours earlier, the Judiciary also announced it was scaling down its activities in the wake of the confirmation of coronavirus in Kenya.

Addressing journalists after the National Council for the Administration of Justice (NCAJ) meeting at the Supreme Court in Nairobi, Chief Justice David Maraga said activities in courts will be scaled down for two weeks effective Monday to allow further consultations. He said that during this time, prisoners and remandees will not be presented to court.

"With regard to new arrests, all cases except serious ones will be dealt with at the police stations following guidelines to be issued by the Inspector-General of Police Hillary Mutyambai," said Mr Maraga.

He was accompanied by, among others, Director of Public Prosecutions Noordin Haji, Ethics and Anti-Corruption Commission boss Twalib Mbarak, Mr Mutyambai and members of the Judicial Service Commission.

He said all appeals, hearings, and mentions in criminal and civil cases in all courts have been suspended with immediate effect.

However, Mr Maraga said courts will continue to handle certificates of urgency and taking a plea for serious cases.

"During this time, all judicial officers and staff will continue being on duty. However, there will be no open court appearances," added the chief justice.

He said judges in all stations will, in the meantime, review the deserving cases already identified by prisons authorities and issue appropriate revision orders to decongest the jails while magistrates' courts will also review bail terms for those in remand.

"All conferences, workshops, colloquia, and training programmes are suspended until further notice. There will be no foreign travel for the next 30 days for the staff of the justice sector institutions, whether official or private, save for exceptional circumstances," said Mr Maraga.

He disclosed that an ad-hoc inter-agency committee has been established to liaise with the national committee and advise the NCAJ on further precautionary measures on an ongoing basis.

"NCAJ will review these directions from time to time as the need arises," said the CJ.

He said NCAJ recognises the challenges posed by the pandemic and the experience of other countries around the world and, therefore, needs to protect members of staff as well as the public from infection and to prevent the spread of the disease.

Covid-19, whose epicentre was in Wuhan, China, had killed nearly 5,000 people and infected more than 130,000 worldwide as of Friday. It has spread to more than 120 countries across the globe.

Separately, Deputy President William Ruto asked Kenyans to adhere to the guidelines provided by the government in checking the spread of the disease.

He said Kenyans had the most critical role to play in the management of the deadly virus by observing personal hygiene.

"Let us all play our roles in ensuring that we minimise the harm that may be caused by the coronavirus," he explained.

He made the remarks yesterday at Friends Church Lang'ata in Nairobi County during a prayer service.