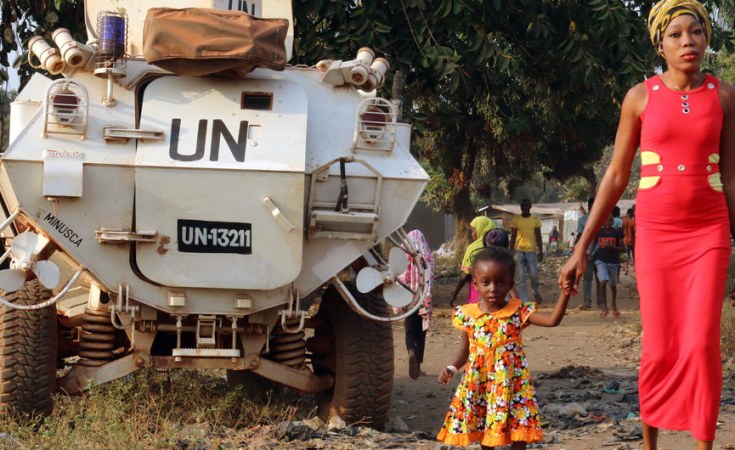 A United Nations peacekeeper from Burundi was killed on Sunday while attempting to stop an armed militant attack in the Central African Republic (CAR), according to a statement released by the UN Mission in the country, MINUSCA.

Armed rebel fighters known as the anti-Balaka, under the command of Dimitri Ayoloma launched an attack on the town of Grimari, west of Bambarim in Ouaka prefecture, in central CAR.

Panic reportedly ensued in the town after they opened fire on the homes of the mayor and sub-prefect.

In accordance with its mandate to protect civilians, peacekeepers from the UN Mission immediately intervened to try and end the assault.

"One of them was fatally injured by the Anti-Balaka, who deliberately opened fire on the peacekeepers", MINUSCA said in a statement released the day of the attack.

The Special Representative of the UN Secretary General in CAR, Mankeur Ndiaye, strongly condemned the "heinous act" that cost the life of a blue helmet.

"This attack on the city of Grimari and the peacekeepers is unacceptable and constitutes a serious crime under the jurisdiction of national and international courts," said the UN envoy.

"The leader of these armed elements, Dimitri Ayoloma, as well as all the perpetrators and accomplices of the attack will have to answer for their actions before the courts", he added.

Mr. Ndiaye, who also heads MINUSCA, recalled that any attack on the life of a peacekeeper can be considered a war crime and is liable to both national and international prosecution.

"This crime must not go unpunished" tweeted Jean-Pierre Lacroix, the UN chief of peacekeeping operations.

Mr. Lacroix, Mr. Ndiaye and all the staff of MINUSCA expressed their condolences to the family of the fallen peacekeeper as well as to the people and Government of Burundi.

On 7 March in the country's northeast, civilians found in the bush the bullet-riddled body of a blue helmet from the UN Mission in Ndélé, who had reportedly been killed by alleged fighters from the Popular Front for the Renaissance in the Central African Republic (FPRC).