Ghana: Why Local Solutions Are Best for Urban Water Supply in Ghana 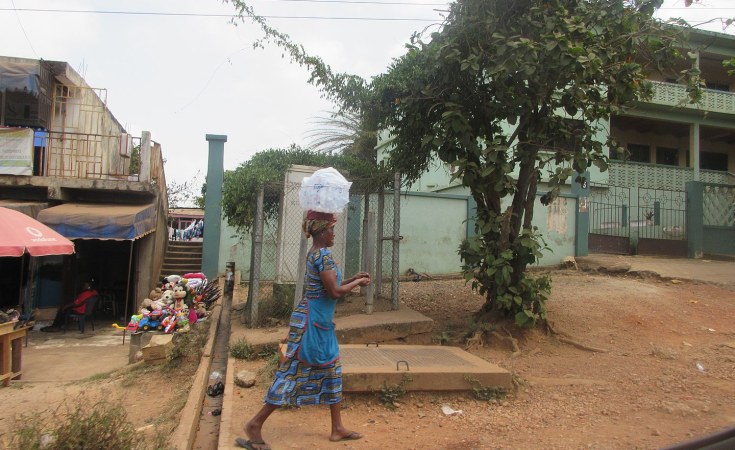 Photo: Kingsford Amoah/Wikimedia Commons
A woman selling sachets of water by the roadside in Ghana.
The Conversation (Johannesburg)
analysis By Isaac Asante-Wusu

Water insecurity ranks as one of the world's biggest problems. Countries in sub-Saharan Africa are among the most vulnerable. A recent global survey by UNICEF and the World Health Organisation suggests that about 490 million people in sub-Saharan Africa lack access to safe water supply, mostly in cities.

In Ghana, for example, over 6 million people (20% of the total population) lack access to safe water supply.

Academic and policy discussions about the failure to achieve water security tend to centre on four issues. These are rapid urbanisation, poor governance, payment for services and climate change.

The issue that's usually missing from the discussion is the specific local factors that drive water insecurity. The gap in knowledge about water at the household level prompted us to investigate the case of the Accra-Tema City-Region in Ghana. With a population of about 4 million people, the city-region is the most urbanised region in Ghana. We wanted to know whether residents of this rapidly expanding region are water insecure and why. We hoped this could shed light on how to solve residents' water problems.

Our research suggests that the specific extent and types of water insecurity in particular places matter when designing a solution.

After studying water insecurity in the Accra-Tema City-Region, we argue that it is due in part to a mismatch between housing growth and water provision. The growth of urban and peri-urban areas in the region has been spontaneous and unplanned. This has resulted in high competition between settlements for water. But the governance system of providing services to residents is weak and centralised - which adds to the problem.

The city-region has undergone major urban and economic transformation in the past four decades. This growth has been driven mostly by factors like freer trade, the rise in both local and foreign investments, demand for home ownership, innovations in building, and weak institutional guidance for housing delivery. As a result, growth in housing has gone ahead without the necessary services and infrastructure.

The Accra-Tema City-Region contains areas designated as metropolitan, municipal and district administrative units. Some of these units are urban, others are peri-urban or rural. Some have urban, peri-urban, and rural spaces within them. The three case study areas in our research display this multiplicity of urban governance. Haatso is urban in its administration; Ashongman is administered partly as urban and partly as peri-urban; and Abokobi is administered as rural, though we suggest it is actually peri-urban.

In practice, this means that residents in Haatso obtain their water from the Ghana Water Company Limited, the mandated urban water utility provider in Ghana. Abokobi's water is piped from a borehole by the Ga East Municipal Assembly with support from the Community Water and Sanitation Agency, which oversees small and rural water supply. Depending on location, residents of Ashongman get water from the source in Abokobi or from the Ghana Water Company Limited. These differences in water services provision mean that some residents have better access to water than others.

But we found that there is water insecurity in all the locations. Despite the differences in water sources, residents face similar issues. These are poor water quality (salinity and hardness), impurity, erratic flow, and high cost.

Because of the inadequacy of piped infrastructure and unreliable supply of water, households are using other sources too. Private water tanker operators have emerged to supply domestic water, and most households drink packaged water. These strategies add to costs for households.

The problems are driven by different forces, though. Abokobi is close to the Gulf of Guinea (about 20km) and this makes its aquifers vulnerable to ocean intrusion. This affects the quality of the groundwater, but the water is not treated rigorously.

The problems in Haatso and Ashongman include a conflicted land tenure system. Land sales frequently generate disputes and claimants build houses before the matter is settled or water is available. The result is spontaneous and unplanned urban growth without adequate provision of water infrastructure. This is coupled with poor regulation of tanker services, and poor household water storage practices. These diverse forces heighten domestic water insecurity in the city-region.

What to do about water insecurity

Based on these findings, we recommend that water provision functions should be devolved in the Accra-Tema City region.

The centralised water supply system run by the Ghana Water Company Limited requires huge capital and stable funding to expand and maintain infrastructure and distribute water. And it is challenged by poor spatial planning and conflicted land tenure systems. The system has not been able to ensure adequate water supply in the 63 years since Ghana gained independence.

It therefore makes more sense to give metropolitan, municipal, and district assemblies the job of supplying water. This approach would be more responsive to local conditions and needs. It will help to address inequalities in access to water and promote competition among municipal water utility providers.

Ghana can learn some lessons from South Africa. Based on a well-built, decentralised and devolved governance system, the country (despite its structural inequality problems) has seen huge advances in infrastructure provision.