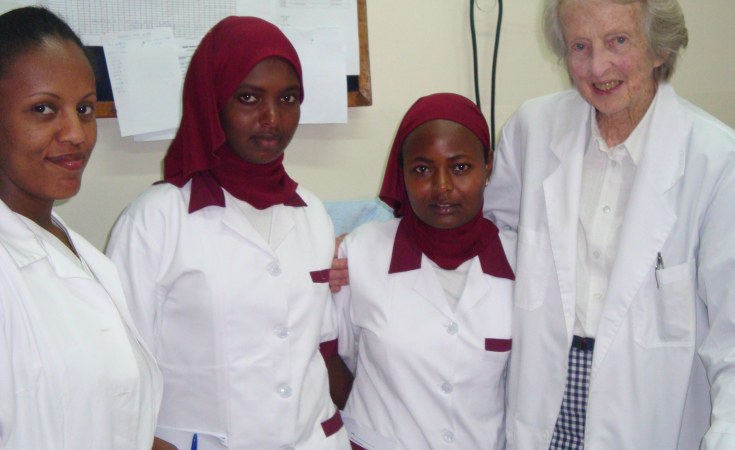 An Australian doctor credited for saving the lives of thousands of women suffering from childbirth injuries in Ethiopia has died at the age of 96, with her foundation vowing to carry on her work to eradicate obstetric fistula.

Obstetrician and gynecologist Catherine Hamlin treated more than 60,000 Ethiopian women over the decades, according to her foundation, offering free reconstructive surgery and care to women who were shunned by their communities.

"She invested her life in the service of women who are marginalized in society," Tesfaye Yacob, former CEO of Hamlin Fistula Ethiopia, told the Thomson Reuters Foundation.

"She transformed the lives of thousands ... It's a wonderful story of love," he added.

Obstetric fistula, one of the worst childbirth injuries, is caused by prolonged and difficult labour without emergency intervention that can result in death or severe disability.

At least one million women across Africa and Asia suffer from untreated fistula, according to the Fistula Foundation, a charity that focuses on maternal health.

Women with fistula are often ostracized and rejected by society as the abnormal hole in their bladder or bowel leads to leakage of urine or excrement. Surgery is the only cure.

Hamlin, who was twice nominated for a Nobel Peace Prize, dedicated her life to help women suffering from trauma and humiliation, with her entourage affectionately calling her "Emaye", meaning mother in Amharic.

"The healing doesn't come only from fixing (the girls) surgically. But the way she treated them was just like she had thousands of daughters," Professor Senait Fisseha, an obstetrician and gynecologist at the University of Michigan, told the Thomson Reuters Foundation.

Hamlin died on Wednesday in Addis Ababa where she spent more than 60 years, living in the verdurous compound of the fistula hospital she co-founded with her late husband in 1974.

Her Ethiopian journey started in the 1950s after the couple responded to an advert in a medical journal to set up a midwifery school in Ethiopia and there found female patients with obstetric complications they knew little about.

After developing expertise in complex reconstructive surgery, she never left a country she came to call home.

There are now six fistula hospitals across the country along with a rehabilitation centre. Since 2007, her foundation has been training midwives who are then deployed to dozens of rural midwifery clinics.

Ethiopian Prime Minister Abiy Ahmed joined the flood of tributes to Hamlin, saying on Twitter the country had "lost a true gem who dedicated more than sixty years to restoring the dignity of thousands of women".

Her foundation "promised to continue her legacy, and realise her dream to eradicate fistula from Ethiopia. Forever".

(Reporting by Emeline Wuilbercq; Editing by Belinda Goldsmith. The Thomson Reuters Foundation, the charitable arm of Thomson Reuters, and covers the lives of people around the world who struggle to live freely or fairly. Visit http://news.trust.org )