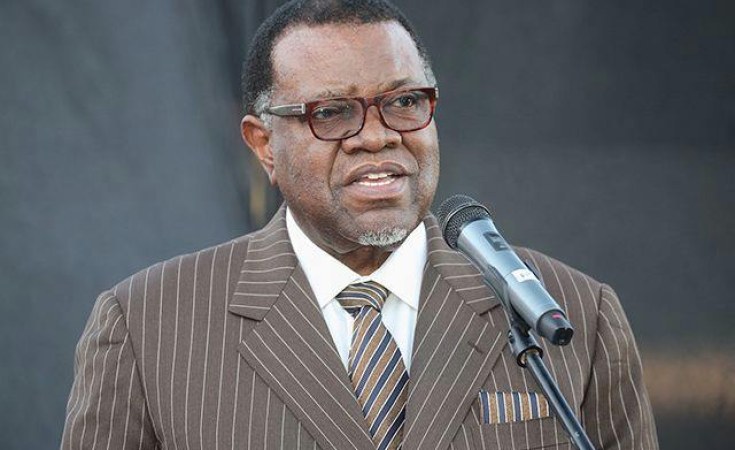 The Namibian
President Hage Geingob announcing a 21-day partial lockdown to curb the spread of the Coronavirus.
The Namibian (Windhoek)
By Okeri Ngutjinazo and Terttu Newaka

People who were quarantined on arrival into Namibia from The Netherlands on Saturday, have described the conditions at the facility they are being kept, as deplorable and inhumane.

The aircraft carrying 35 people returning to Namibia from coronavirus-hit Europe landed at Hosea Kutako International Airport on Saturday morning. The plane belongs to KLM Royal Dutch Airlines, which is the flag carrier airline of The Netherlands

The group include Namibians and residence permit holders.

Speaking to The Namibian yesterday, one of the quarantined persons described the conditions at the facility as terrible and inhumane, adding that the ceiling is falling apart while some rooms reeked of mice urine and there were rat droppings in others.

She was on a tourist visa in Amsterdam and had to return because her visa had expired.

Before they disembarked, they were given one pair of masks and gloves but they were, however, not provided more at the facility. The only thing they got was one bottle of 'hand sanitisers', which actually contained dishwashing liquid diluted with water.

"This morning we asked the person representing the owner for cleaning supplies and materials to clean the rooms ourselves, but he was unable to give us any cleaning materials and only later this morning (Sunday) did I see the staff having one bucket of Pine Gel," she said.

Yesterday morning, they allegedly received one packet of gloves and masks to share among themselves. She added that the water supply comes and goes.

They were given some bars of soap yesterday, she said.

"We received some bars of soap this morning (Sunday) after the bad and horrific situation started to circulate on social media," she said.

The woman said only after the pictures were circulated on social media did two officials from the ministry come to the facility to assess the situation.

After speaking to them, the officials said they would go back to their supervisors and submit their recommendations.

She further said their lunch was delivered from the state hospitals, but none of their dietary needs were taken into consideration.

"I have stage four cancer and my immune system is consequently already impaired, which means that I am more susceptible to picking up germs and getting sick and dying from dirty and unhygienic circumstances and situations such as these. Being in this dirty facility poses a real and serious risk to my health," she said.

A 21-year-old who also spoke on condition of anonymity, said she is a Namibian resident who had gone to Europe to visit friends and family. She described the conditions at the quarantine centre as appalling and unhygienic.

She said the group has still not all been tested since they landed, but a few have been screened.

"The screening process was done today [Sunday] on half of the group, where their blood pressure and temperature were taken. The rest are still waiting to be screened, myself included," she said.

She said although no one in the group is showing symptoms, she fears they are at risk of being infected should there be a case among them.

She added that the group is left alone at the facility for most of the day, and occasionally visited by officials who would not be wearing protective gear and therefore risk infecting the rest of the country after leaving the centre, should they get infected at the facility themselves.

Minister of health Kalumbi Shangula said the passengers were screened on the plane and when they landed at the airport.

He added that immigration formalities were done on the plane, and when the passengers disembarked they were taken directly to buses which took them to the isolation facility.

The ministry's executive director, Ben Nangombe, yesterday said the persons are being accommodated at a 50 hectare plot and are only using a certain section of the facility.

"There are sections of the facility which have not been used but they are people who have been quarantined and are being placed in a room there, and every effort has been made to make sure the room is liveable. The facility managers were also directed to further clean and improve the area," Nangombe said.

"What must be understood is that the government is not doing this to be nasty, we are doing this because we want to protect the broader public," he added.

Nangombe said in other countries, governments have identified facilities for people to stay in but they are quarantined at their own costs while in Namibia, the government is providing free accommodation and food for the next 14 days.

"As much as the facility may have some challenges with standards, this is the kind of sacrifice that we strive to make in order to protect the country," he said.

With regards to the testing, the executive director said the passengers are not sick but they are being placed under quarantine since they are coming from an area which is affected by the virus and they are being screened during that period.

He added that if they start showing symptoms which are consistent with the virus then they will be tested.

Previous Story
Tagged:
Copyright © 2020 The Namibian. All rights reserved. Distributed by AllAfrica Global Media (allAfrica.com). To contact the copyright holder directly for corrections — or for permission to republish or make other authorized use of this material, click here.