VIDEO: Uganda COVID-19 Restrictions Leave Many Out on a Limb
The Monitor (Kampala)
By Monitor Team

The closure of borders and markets due to coronavirus has triggered mixed reactions, with traders asking government for financial support to enable them to sustain their families during the one month partial shutdown.

In eastern Uganda, government officials on Sunday closed Malaba, Busia and Lwakhakha, the busiest border points in the region after the President announced closure of borders.

The traders interviewed by Daily Monitor said they respect the presidential directive but government should consider supporting them financially.

"We will stay home but how are we going to survive. We were not prepared for this. The government should intervene and support us, financially," Mr Joseph Opio, a shop attendant at Malaba border, said.

Mr Opio said the government should order Bank of Uganda to print money to be given to its citizens like other countries have done.

Mr Francis Onyango, a money changer at Malaba border, said his customers are Kenyans, who have been barred from crossing into Uganda.

"I am not opposed to the directive but government should also consider our livelihoods. Other countries are supporting their citizens, ours should also do the same during these hard times," Mr Onyango said.

Mrs Susan Agwang, a dealer in fresh foods at Busia and Malaba border, said during this period, many of them will be out of business because the fruits cannot be stored locally.

"As we talk I have a running loan and the bank will not listen to me when I explain to them about the government directive to close the border," she said.

Mr Emmanuel Otim, the border Internal Security Officer station at Malaba, said at the moment only cargo trucks entering into the country are allowed but each is restricted to carry not more than two people.

"....All passenger buses, private cars and pedestrians are not allowed as government continues to monitor the situation," Mr Otim said.

Mbale Main Market is operating but under stern restrictions. The traders have also improvised handwashing points at different entry points.

"We have to follow the directives because if the government closes this market, we will die of hunger," Mr John Magomu, one of the vendors, said.

In Budaka and Butebo, the local leaders joined by the police used teargas to force vendors out of Iki-Iki and Kabwangasi markets.

The Iki-Iki Sub-county chairperson, Mr Zedekiya Modhingi, said they had to use force because the traders refused to vacate the market.

In Kitgum, police have blocked vendors from conducting flea market in the villages. The traders, who mostly deal in second-hand and ready-made clothes, electronics and plastics, were blocked when they were loading their merchandise onto trucks before leaving for the market days.

Ms Patricia Grace Acan, a clothes dealer, said they have families to take care of yet the livelihood has been affected.

"Ministry of Health should work around the clock to ensure that the deadly virus is weeded out otherwise people will die of hunger. Imagine the children are at home and they need food but we cannot make ends meet," she said.

Ms Mary Aneno, a vendor, said her bills are getting worse, she has not paid house rent and if such markets are stopped, she will be left with no option but to get back to the village and embark on peasant farming.

Mr Geoffrey Opiyo, the general secretary of Kitgum Owino traders association, told the traders to remain calm as government handles the situation. "We are not the only ones, the entire world is on a lockdown but, we shall get over it," she said

Kitgum District Police Commander Moses Were said they will not entertain any complaints from traders. 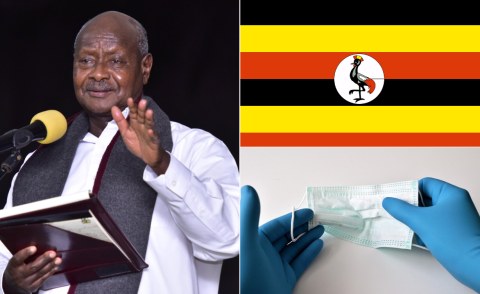 Confusion, Frustration as Uganda's Public Transport Resumes
Tagged:
Copyright © 2020 The Monitor. All rights reserved. Distributed by AllAfrica Global Media (allAfrica.com). To contact the copyright holder directly for corrections — or for permission to republish or make other authorized use of this material, click here.