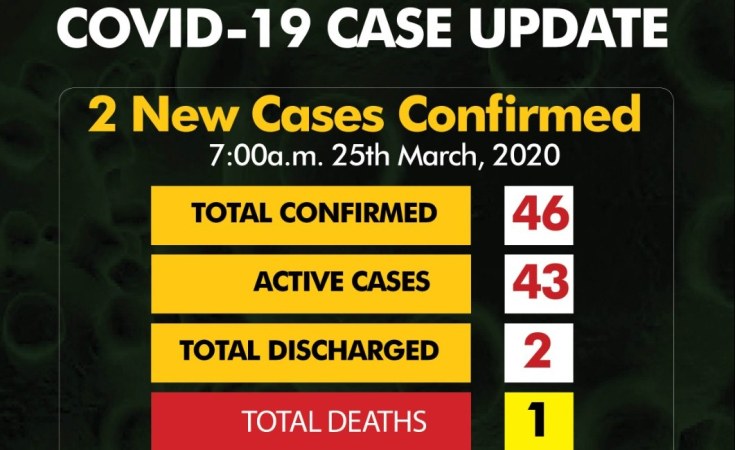 Nigeria announced two new cases of COVD-19 on Wednesday, bringing the total number of confirmed cases in the country to 46, the Nigeria Centre for Disease Control has disclosed.

The two cases were reported in Lagos and Osun.

This is the first confirmed case of COVID-19 in Osun State.

According to the NCDC, both cases were detected in travellers who returned to Nigeria in the last seven days.

The public health agency, on its Twitter handle, said that "as at 07:00 am 25th March, there are 46 confirmed cases of COVID19 in Nigeria, two have been discharged with one death".

So far, most of the infected people are those who have recently returned to the country from high risk countries.

More cases of COVID-19 are still expected to be reported in the country.

The government has intensified contact tracing to track those who might have been in contact with the infected people, some of whom have already found and tested positive to the virus.

Among the people who have tested positive to the disease in Nigeria are government officials, administrators among others. These include Bauchi State Governor, Bala Mohammed, and Chief of Staff to the President, Abba Kyari.

Vice President Yemi Osinbajo is currently on self isolation after reports he might have met with some of the infected officials.

Many other top officials have also commenced self isolation.

Over 80 Journalists 'Barred' From Aso Rock

No National Lockdown for Nigeria, Despite Rise In COVID-19 Cases
Tagged:
Copyright © 2020 Premium Times. All rights reserved. Distributed by AllAfrica Global Media (allAfrica.com). To contact the copyright holder directly for corrections — or for permission to republish or make other authorized use of this material, click here.

Is South Africa a Haven for Fugitive Genocide Suspects?
Company