South Africa: 'I Don't Want to Die On the Street' - Homeless People Eager to Be Taken to Shelters During Lockdown 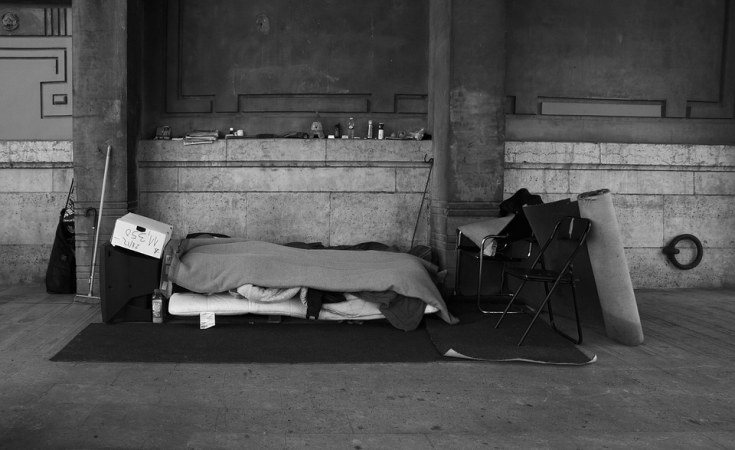 Homeless people roaming the streets of Lenasia in Johannesburg are eager to co-operate with President Cyril Ramaphosa in preventing the spread of the coronavirus.

Ramaphosa declared a lockdown of the entire nation on Monday evening.

One of his announcements was that homeless people would be housed in shelters from 26 March until 16 April.

Speaking to News24 on Wednesday, a group of homeless people said they have little information about the virus. They also do not have a place to stay while the majority of South Africans go into lockdown at home.

Among their concerns were the provision of food, blankets and medication, because they are also forbidden from roaming the streets.

They also called on the government to assist them with drug rehabilitation programmes while being housed in shelters.

'I heard about coronavirus'

Nonhlanhla*, 29, said she survived by collecting recyclable materials and selling her body to feed herself. She hails from KwaMashu in KwaZulu-Natal and has been living on the streets of Lenasia since 2017 after arriving in the area.

"I came here with my boyfriend and we were residing in an informal settlement until he was arrested in 2017. I was left alone with no one to assist me and I became addicted to drugs."

She said almost all the women she knew on the streets sold their bodies to feed their drug addiction.

"I have heard about coronavirus when I went to collect my monthly medication from the clinic. We don't have masks and gloves to protect ourselves. I don't know if I have the virus or not because I interact with many people daily.

"Home is very far and this is the time where I wish I was safe with my parents. Unfortunately, I am here and will abide with the government to take me to a place where I will be safe until the lockdown is over," Nhlanhla said.

Her friend and fellow sex worker, Mmapula*, 29, said she also wished she was home in Orange Farm where she fled when she was 16 years old.

The two suffer from a chronic illness and are worried that should they contract the coronavirus their health would deteriorate further and could ultimately lead to their demise.

"I grew up on the streets. The streets have ruined my life. I didn't want to listen to my parents when they were reprimanding me and I chose to be disobedient.

"Look at me. I am addicted to drugs and am selling my body daily to smoke. This life is not good for anyone. No parent would want to see their children in this state.

"Drugs own us. We live and sleep on the floor and we don't know if we have the coronavirus or not. Who is going to assist us should we test positive?" Mmapula asked.

She also wants to be relocated with other homeless people.

Mmapula has been on the street since 2007 when she ran away from home.

"I mingled with wrong people and quit school at a very young age. My parents don't know where I am now. They don't know how I look and the life I am living. Of course, I want to go home, the problem is how, and when will I decide.

"I am afraid of this coronavirus and want to be in a safe place during the lockdown. We have been warned by taxi people that we are going to be locked up if soldiers and the police find us loitering in the streets," she said.

Their friend, Siphamandla Khanye, comes from Nelspruit. He claimed he had nowhere to go but to a shelter arranged by the government.

"I am ready to be kept in a place of shelter. Nobody wants to be attacked by soldiers should they find us on the streets.

"We are ready and the government must come and take us. We also plead with them that in that 21 days of lockdown they must assist us by helping us quit drugs," he said.

Khanye shares a small space with Kondile Mabutho outside a supermarket. He is also willing to be relocated.

Mabutho and Khanye sleep on boxes and sleep under old blankets. They try to earn money by collecting recyclable materials which they sell at a scrap yard.

"We are afraid because if he has coronavirus, I will be exposed and infected. We share a box we use to sleep on and eat everything together. From what we heard at the local clinic, that coronavirus is deadly.

"I don't want to die on the street although my home is here in Soweto. I am afraid to go back home after what I did. I want to go back as a changed man with sober habits," he said.

Acting Social Development MEC Panyaza Lesufi said the department had identified homeless people who would be sheltered for a month.

Lesufi added those who were willing to be removed from the streets would be relocated and provided with shelter and food.

He said the department have identified 13 schools where the homeless would be accommodated, adding some have boarding facilities.

*not their real names