Africa: Keeping People Fed in a Time of COVID-19 Lockdowns 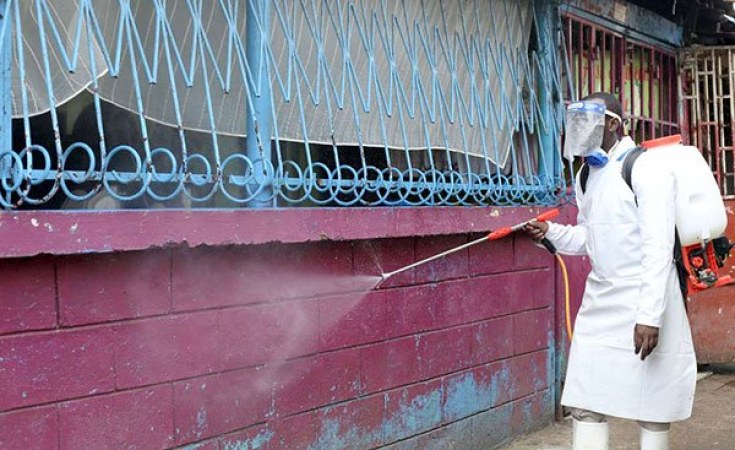 Sila Kiplagat/Daily Nation
Burma Market in Nairobi is disinfected to prevent the spread of coronavirus, on March 25, 2020.
allAfrica.com
column By Jemima Njuki

"The government is saying we stay in the house, but if we do that, we will die of hunger. If we go out to look for money to buy food, we will die from the virus. They need to tell us what to do!" These were sentiments from Pauline, a Nairobi resident during a TV interview a few days ago. It is a dilemma faced by many living cities across Africa as governments move to enforce lockdowns to manage the spread of the COVID-19.

The world has experienced lockdowns in the last few weeks, from Wuhan in China to countries in Europe such Italy. The lockdowns have taken many forms, total lockdowns or restricted lockdowns.

In Africa, South Africa has already initiated a lockdown for the next 21 days, with restricted movements to access medical services, purchase groceries and access other essential services.

Compared to other regions, Africa has the highest population in informal employment at 85.8 per cent compared to 68.2 per cent in Asia and the Pacific, 68.6 per cent in the Arab States, 40.0 per cent in the Americas and 25.1 per cent in Europe and Central Asia. Majority are traders, daily wage laborers, or in other self-employed professions. For them, not going to work for a day is the difference between having a meal or not. And most of their daily income is spent on food. Of the 10 countries that spend over 40 per cent of average income on food, four of them are in Africa led by Nigeria, where households spend 56.4 per cent of their income on food, Kenya at 46.7 percent, Cameroon at 45.6 per cent and Algeria at 42.5%.  In informal urban settlements, the percentage is even higher.  Research in one of Nairobi's largest slum settlements, Mathare, suggests that food is the single largest expenditure for residents, accounting for nearly half of household expenses.

Given this informal nature of Africa's economies, a lock down of the economy will lead to job losses and must be accompanied by plans to ensure that populations remain nourished. Otherwise without sufficient social safety nets from government that allow them a sustenance, what options do they have?

First, governments in Africa must implement a phased lockdown process that allows access to basic services such as access to food from markets, health series and access to water, fuel for cooking and lighting amongst other things. Where markets may not function, food distribution to affected households will be critical to keep people alive. Even in countries with large formal sectors, governments are combining lockdowns with food distribution as well as distribution of other necessities. In Jordan, the government is mobilising municipal resources to distribute daily rations of food to people affected by the lockdown in addition to expanding the National Aid Fund for people that can not afford them while at the same time keeping main supplies such as gas, and alternative distribution and delivery procedures for basic staples that include frozen chicken, milk, rice, sugar, eggs, sanitizers and detergents going.

Second, even with partial lockdown, keeping food sources and other basic services open requires that people have the cash to purchase these items.

Without jobs, governments must provide a social safety net in form of cash transfers to enable households who have lost their sources of income. And the provision of cash transfers is not new. In Kenya, in 2016, over 33 per cent of households reported getting cash transfers. Cash transfers have been shown to have positive impacts on nutrition, reducing stunting in children and enabling households to smoothen consumption. A cash transfer for each household that covers the basic household needs for food, fuel and basic cleaning provisions should be part of every government's COVID-19 management plan.

And finally, when the epidemic is over, we are going require a ramping up of food production by smallholder farmers.

A stimulus package for rural smallholder farmers to ensure they can recover quickly to go back to full production will be needed. African countries can learn from Australia, where the government has announced a stimulus package of  $1 billion as a 'regional and community fund' to support industries affected by the economic fallout of COVID-19 mainly agriculture.

Many would argue that African countries can not now afford to make such investments while at the same time deal with the health impacts of the COVID-19. As the World Bank, IMF and other development organizations set aside funds for economic recovery, these investments should not just go to supporting companies, but also individuals and smallholder farmers.

Mothers like Pauline should not have to chose between feeding their families and protecting themselves from COVID-19.

Dr Jemimah Njuki is an expert on gender, agriculture and food security. You can follow her @jemimah_njuki