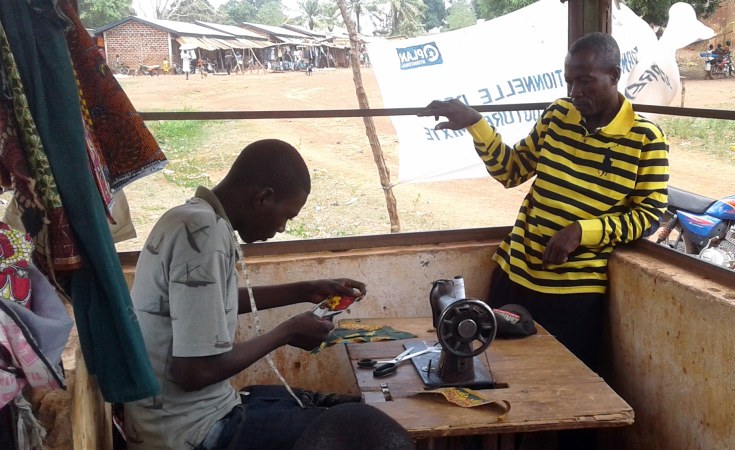 The Central African Republic (CAR) has been called the most dangerous place in the world for children. Sectarian violence has ripped the country apart, killing tens of thousands of people and driving more than a million from their homes. Some 1.5 million children now require humanitarian assistance.

With 80 percent of the country under the control of local warlords, thousands of children have been recruited by armed groups. Some are used as soldiers; others are exploited as cooks, porters, messengers and spies.

17-year-old Luc*, 17, is a former child soldier who is turning his life around after joining a programme run by Plan International which is reintegrating young people who have left armed groups back into society through education and vocational training.

Luc became a child soldier after his village was attacked by an armed group called the Seleka during a bloody fight with anti-balaka fighters in the village.

"My family was forced to flee to find shelter at a camp for displaced people so I decided to join the anti-balaka group and fought with the movement to avenge our burnt down house," explains Luc who eventually left the group to find his family at the IDP camp.

When children leave armed groups, returning to a normal life is not easy as they often suffer discrimination and rejection by their family.

Fortunately for Luc his family were happy to have him back and today, he is one of 40 adolescents who are taking part in vocational training at a rehabilitation centre in Bangui.

"I chose to learn sewing because I have dreamed of becoming a fashion designer ever since I was young. It will allow me to save money to take care of myself and my family," explains Luc who has recently found a job placement at a local tailoring workshop.

At the end of his training, the young people receive the materials and equipment they need to set up their own businesses. "We are a poor family and the only food we receive is what we get at the IDP camp. Now I can make money through my new job and help buy food."

The project, funded by the Netherlands Ministry of Foreign Affairs, also reunites children who have become separated from their families and provides psychosocial support to children caught up in conflict so they can successfully rejoin society.

"I had to stop going to school because my parents could no longer afford to pay for my education but Plan International gave me the opportunity to make a living with this training,” Luc says.

Luc’s mother is also pleased to see her son getting his life back on track. "I am thankful to the organisation for all they have done for my son by giving him a second chance. I hope he will now be able to find a good job."