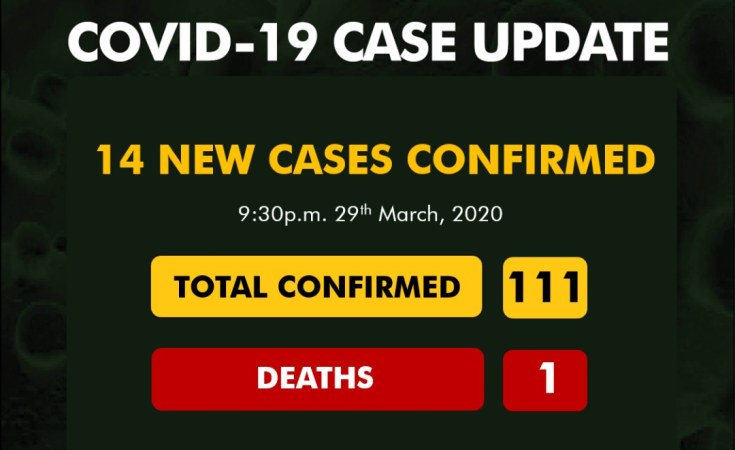 Few minutes after President Muhammadu Buhari addressed Nigerians, the Nigeria Centre for Disease Control (NCDC) announced the confirmation of 14 new cases of COVID-19 in the country.

The public health agency on Sunday said 14 new cases have been reported in two states: nine in Lagos and five in FCT.

This brings the total number of confirmed cases in the country to 111.

Nigeria has now recorded 111 cases of the disease including one death.

Before the NCDC announcement, President Buhari addressed Nigerians for the first time on the COVID-19 pandemic.

He listed, among others, the ban of movement in Lagos, Ogun and Abuja from Monday night to prevent the spread of the disease.

After Mr Buhari's speech, the health minister, Osagie Ehanire, said the government will thoroughly intensify contact tracing to identify those who might have been exposed to COVID-19 from a positive patient.

As it stands, most of the confirmed cases in Nigeria are persons who have visited countries with a high burden of the disease or those who had contact with such returnees.

Mr Ehanire reiterated that the government will use this containment period to identify, trace and isolate all individuals that have come into contact with confirmed cases.

We will ensure the treatment of confirmed cases while restricting further spread to other states, he said.

Mr Buhari had ordered a ban of all movements in Lagos and the FCT for an initial period of 14 days with effect from 11 p.m. on Monday, March 30.

"This restriction will also apply to Ogun State due to its close proximity to Lagos and the high traffic between the two states," he said.

He said "all citizens in these areas are to stay in their homes. Travel to or from other states should be postponed. All businesses and offices within these locations should be fully closed during this period."

The restriction order does not apply to hospitals and all related medical establishments as well as organizations in healthcare related manufacturing and distribution.

"Although these establishments are exempted, access will be restricted and monitored," the president said.