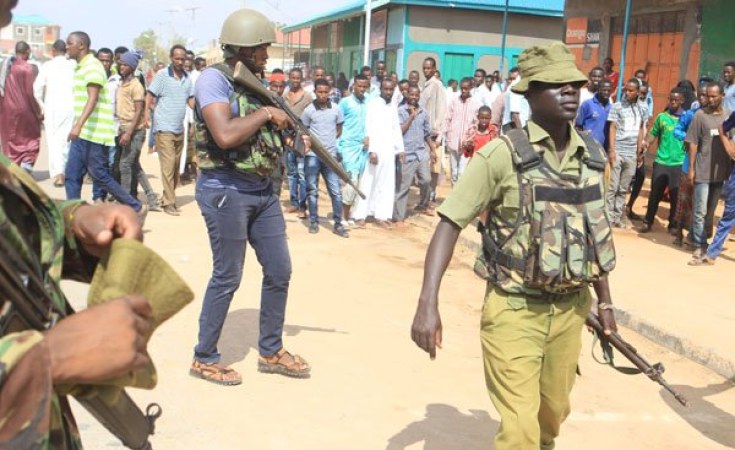 Uproar has greeted the manner in which police officers executed curfew orders on Friday, with some rights groups calling for civic education for them and the public.

In Nyanza, lobbies said the government must protect civilians' rights in effecting the indefinite 7pm-5am curfew aimed at curbing spread of the deadly coronavirus.

In an update on Saturday, the Health ministry said the number of confirmed cases in the country had risen to 38 as seven more people had tested positive for Covid-19.

Cabinet Secretary Mutahi Kagwe did not speak in detail about the curfew but noted, "If we want to save Kenyans and avoid the experiences in other countries, we must social-distance and stay at home when told to."

The first day of the curfew was chaotic as some commuters were stranded at bus stops during the rush hour after work, with public transporters adhering to the directive.

Police in various locations were also pictured and recorded caning people who defied the curfew, raising the issue of brutality.

The lobbies said rights must not be thrown out of the window despite desperation as more cases of the disease are reported in Kenya.

They asked police to discharge their mandate professionally so as not to create tension.

"We know that the shocks of this new disease are severe and unanticipated for the entire nation but members of the public must not be subjected to torture, cruel, inhumane or degrading treatment or punishment as evidenced in police actions seen in social media video clips," civil society organisations (CSOs) in Siaya County said in a joint statement on Saturday.

The groups demanded action by the government for the sake of protection of human rights.

They noted that quarantine, the curfew and travel bans have made normal operations difficult, hence the desperation.

They also noted the need to ensure access to preventive care, goods and services and affordable healthcare; guaranteed social security and workers' rights, prevention of stigma and discrimination and the protection of health workers.

"There are several reports of shortages of protective goods such as sanitiser and masks in some of the health facilities across the region, which needs to be fixed," stated the statement read by Chris Owala, Executive Director of Community Initiative Action Group Kenya (CIAG-K).

He asked the government to also ensure psychosocial support to prevent the potential mental health consequences of the Covid-19 epidemic, which include anxiety and depression because of quarantine and the fear of infection.

In Homa Bay County, a lobby group told police not to use force in executing the curfew orders.

Mr Water Opiyo, leader of the Homa Bay Bunge la Wenye Nchi, called for civic education for both police and members of the public, saying it appears both parties are confused.

"When the curfew started, members of the public started running when they saw police. The officers also started chasing them. This is an indication that none of them knows what should be done," he said.

Mr Opiyo said civilians with genuine reasons for being out at night should be given the chance to explain before police react.

In Busia County, a section of bishops challenged the government to put in place measures that will help Kenyans access commodities such as food as they practise social distancing.

Led by Apostle Silas Wanyonyi of Church of Christ and pastors John Mwiruri and David Osangir, the clerics observed that most citizens are economically affected by the pandemic.

"Both the county and national governments should devise a way of reaching the poor at the grassroots during this trying moment. It will be ironical for citizens to die of hunger instead of the coronavirus," said apostle Wanyonyi.

While lauding President Uhuru Kenyatta and other government officials for accepting pay cuts and reducing taxes for those earning Sh 24,000 and less, the clerics proposed lower costs of fuel and other essential commodities to ease the cost of living.

"We have interacted with a section of residents who said fuel prices have already increased. This means that the cost of living will automatically go up if status quo is maintained," said Mr Muiruri.

The religious leaders added that they were disappointed with churches that have persisted with services "with the intention of collecting tithes and offerings" despite a government order against such gatherings.

Meanwhile, police in Vihiga County have praised residents for complying with the dusk to dawn curfew.

County Police Commander Hassan Barua said that as a result, no arrests were made.

No ugly incidents were witnessed as police kept vigil in the main trading centres across the county.

"We thank the people for complying and urge them to continue with the same spirit," Mr Barua said.