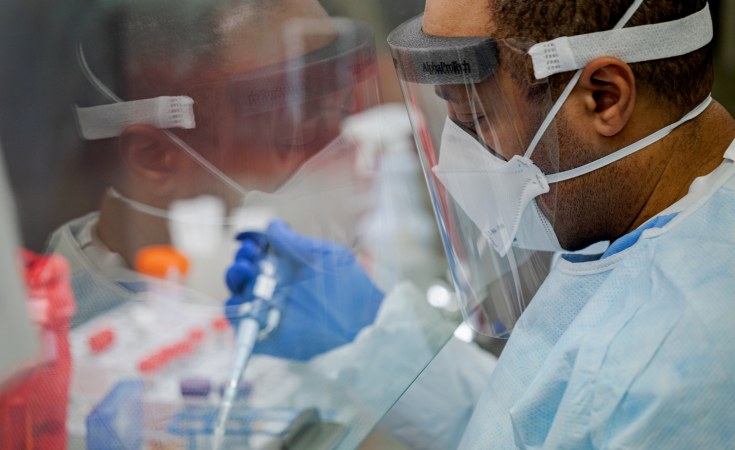 Nigeria has tested over 2,000 people for COVID-19, an official has said, with less than 10 per cent testing positive.

The Director-General of the Nigeria Centre for Disease Control (NCDC), Chikwe Ihekweazu, also said the agency was working to track about 6,000 people who have been in contact with persons who tested positive to COVID-19.

PREMIUM TIMES reported how a total of 111 people have tested positive to the virus, as of Sunday night, according to the NCDC.

Mr Ihekweazu spoke on Monday morning on Channels Television, several hours after President Muhammadu Buhari addressed Nigerians about the disease and the administration's effort to combat it.

Mr Buhari, as part of the measures to check the spread of the disease, announced a lockdown of Lagos and Abuja, the two most affected states by the virus, as well s Ogun, due to its proximity to Lagos.

Health minister Osagie Ehanire, hours after the president's speech, said the lockdown will allow the government to trace those who have been in contact with those who have tested positive to COVID-19.

Mr Ihekweazu reiterated a similar view, adding that the confirmed COVID-19 cases are expected to rise.

"In the short-term, the numbers of confirmed cases of COVID-19 are expected to keep rising, but NCDC also expect to be able to get on top of this," Mr Ihekweazu said.

"We expect cases of COVID-19 to rise as we improve capacity to detect and test. Our laboratories are activated to function 24/7.

"We appeal to Nigerians to work with us in compliance with the measures instituted by the president," he added.

The NCDC chief said there was a need to prevent further transmission of the virus. He noted that the president's speech was a call for Nigerians to come together.

He added that the measures that have been implemented would work in curbing the spread of the virus.

He, however, appealed to Nigerians to bear the few weeks of pain that would come.

The NCDC boss said that Nigeria has been lucky not to have had too many severe cases of COVID-19.

He disclosed that NCDC has currently tested well over 2,000 people and has also increased the number of laboratories in its network.

PREMIUM TIMES reported how the NCDC increased the number of its testing laboratories from five to six, a figure expected to rise to seven by Monday.

"We are being bogged down by people who do not require the test. So we have to manage demand. We have to focus on those who need it the most.

"The duration between testing and results depends on several factors. But it is between 24 to 48 hours. Our target is to get results out in 12 hours," he said.

The NCDC chief said that the success of the measures put in place to contain COVID-19 would depend largely on the willingness of Nigerians to work with the NCDC team. He added that the laboratories being used for testing would soon be increased.

"Our team is working round the clock to improve turn-around time for testing in all our six molecular laboratories.

"We aim to scale up to 13 labs in the next three weeks. In progress- Abakaliki, Maiduguri, Kano, Sokoto, Port-Harcourt, Jos and Kaduna States," he said.

The NCDC chief said that the laboratories would also provide diagnostic support for a number of states in the country.

He acknowledged not knowing if people who recover test positive again. He added that there were a lot NCDC and the world does not know yet about the disease which has caused thousands of deaths globally.

He, however, added that the NCDC's ability to check the spread of COVID-19 will depend on all Nigerians.

"Our goal is to mobilise all available resources to tackle COVID-19. We remain grateful for the support we have received so far from stakeholders and partners," he noted.

Previous Story
NCDC Traces 6,000 Contacts As COVID-19 Cases Rise to 131
Next Story
Coronavirus - Nigeria May Not Need Many Ventilators for Patients - Minister

Coronavirus - Nigeria May Not Need Many Ventilators for Patients - Minister

Nigerian Senators Donate 50% of Salaries for COVID-19 Fight
Tagged:
Copyright © 2020 Premium Times. All rights reserved. Distributed by AllAfrica Global Media (allAfrica.com). To contact the copyright holder directly for corrections — or for permission to republish or make other authorized use of this material, click here.