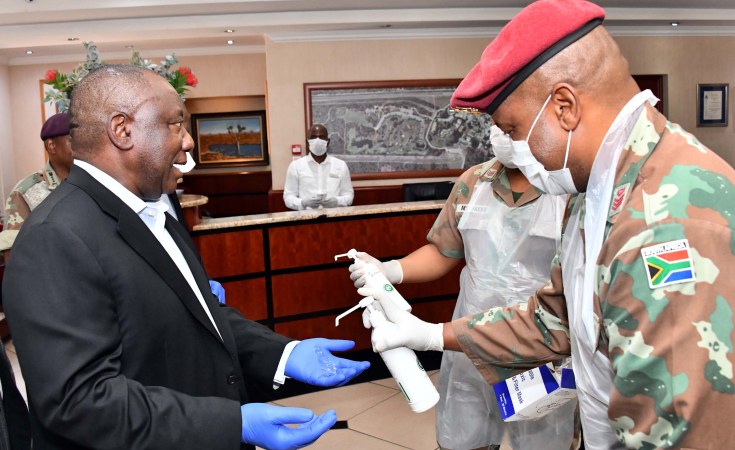 GCIS/Flickr
President Cyril Ramaphosa at the Ranch Resort on March 29, 2020 as he sees off quarantined citizens. The group was placed under quarantine at the resort from 14 March 2020 after they were repatriated from Wuhan in China following the outbreak of the novel coronavirus COVID-19.
News24Wire (Cape Town)
By Ntwaagae Seleka

President Cyril Ramaphosa has reiterated the role of law enforcement officers and security personnel, who are deployed to keep law and order during the lockdown, is to provide support and reassurance to the nation, not to cause harm.

On Monday, Ramaphosa updated the nation about the lockdown which is in its fourth day.

Among his updates was the number of deaths related to Covid-19 which now stands at three, the number of infected people (1 326) as well as the number of donations made to the country by various parties in a bid to help stem the spread of the deadly virus.

Ramaphosa also took the opportunity to thank the individuals who are on the frontline of fighting the pandemic which has infected more than 700 000 people and killed more than 35 000 across the globe.

"We would like to thank our nurses, doctors and other health workers, social workers and frontline government staff, volunteers and NGOs who are leading the fight against the disease.

"We thank the 18 000 security personnel, drawn from the police, defence force, metro police and other entities who are responsible for ensuring our safety.

"We have made it clear that the task of our security personnel is to support, reassure and comfort our people, and to ensure peace and order is maintained," he said.

Ramaphosa's comments came after several videos had gone viral on social media showing law enforcement officers, including members of the SA National Defence Force (SANDF), abusing members of the public who were not adhering to the rules of the lockdown.

These acts were in direct contrast with orders he had given to SANDF members last Thursday before they were deployed.

Speaking to the troops at the Doornkop army base in Soweto last week, Ramaphosa told them people were worried and uncertain, calling on them to reassure them things would be fine.

Addressing a video believed to be of a soldier threatening to use maximum force when dealing with civilians, Ramaphosa said this was not the time for "skop en donner"

"This is not the time for skop en donner. This is a moment to be supportive of our people."

In some of the videos, which have since been circulated on several platforms, members of the public are seen being assaulted, kicked, forced to roll on the ground, do push-ups, squats and frog jumps seemingly as a form of punishment for flouting lockdown rules.

On Sunday, an Ekurhuleni Metro Police Department officer and a private security guard were arrested after they allegedly shot and killed a man in Vosloorus.

Cuban Doctors Step in to Assist South Africa in COVID-19 Fight
Tagged:
Copyright © 2020 News24Wire. All rights reserved. Distributed by AllAfrica Global Media (allAfrica.com). To contact the copyright holder directly for corrections — or for permission to republish or make other authorized use of this material, click here.