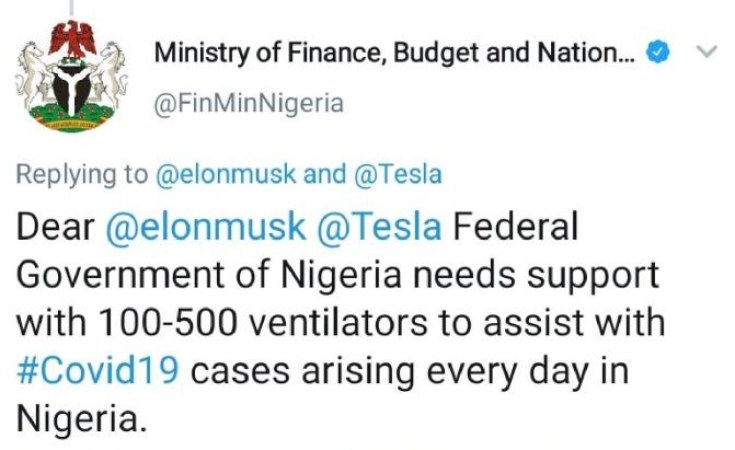 'No patient in Lagos needs ventilator'

As the number of confirmed cases from the deadly COVID-19 pandemic increase in the country, there are only 169 ventilators in sixteen out of the 36 states.

Our correspondents report that there are some states that are yet to procure any ventilator for the treatment of COVID-19, while others say they have placed orders and were expecting the delivery of the equipment any moment from now.

Credible sources said most of the 169 ventilators in the states covered by this report have been there for long, indicating that they were not purposely procured to manage the crisis that might likely come with the coronavirus.

Findings revealed that a hospital-grade ventilator is between $25,000 (N9.175million) and $50,000 (N18.350 million) each, based on the official CBN rate of N367 as of Monday, March 30, 2020. Though Lagos and Abuja were the worst hit by the coronavirus, efforts to get the exact number of ventilators in the two cities were not successful.

The Lagos State Commissioner for Health, Prof. Akin Abayomi, said that despite having a total of 81 confirmed cases who have tested positive for COVID-19 as at yesterday, no patient is in need of ventilator yet in the state.

Speaking at a press briefing yesterday, Abayomi said, "Most of the COVID-19 patients are experiencing a very mild to moderate degree of illness. We don't have anybody requiring ventilation at the moment."

According to Wikipedia, a ventilator is a machine that provides mechanical ventilation by moving breathable air into and out of the lungs, to deliver breaths to a patient who is physically unable to breathe, or breathing insufficiently.

A respiratory expert who craved anonymity said Nigeria requires about 10, 000 respirators for emergency cases. He said at the moment, there are less than 50 in both public and private hospitals in the Federal Capital Territory (FCT).

"I pray the country does not find itself in emergency situations like what is presently happening in the US because there wouldn't be enough ventilators to handle the situation," he said.

While answering questions from newsmen on Monday, the Minister of Health, Dr. Osagie Ehanire, said even though there were no enough ventilators in Nigeria, the country might not need many of them for the treatment of patients suffering from COVID-19, an ailment that attacks respiratory system.

The minister said most of the over 130 cases so far recorded in the country were being managed without ventilators because the patients showed mild symptoms.

Number of ventilators in states

In Kano State, the deputy governor, Dr. Nasir Yusuf Gawuna, who is the chairman of the Task Force Committee on COVID-19, said there are 27 ventilators at the newly converted isolation centre at the Kwanar Dawaki Pfizer Hospital.

Gawuna said this was in addition to a number of ventilators at different hospitals, which could be used when the need arises, noting that only about 20 per cent of patients need ventilators.

The Aminu Kano Teaching Hospital (AKTH), which was listed as one of the possible isolation centres by the Kano Task Force on COVID-19, has eight ventilators in its Intensive Care Unit.

However, the Director, Infections Control of the hospital, Professor Isah Abubakar, said the number would be grossly inadequate in case of an outbreak as some of the beds were already occupied by other patients with respiratory challenges.

He equally requested that the AKTH laboratory be upgraded to one of the centres for testing and diagnosis of the COVID-19 in the North. In Ogun, the Commissioner for Health, Dr. Tomi Coker, said there are 24 functional respiratory ventilators in the state.

Similarly, the Edo State government said it has 25 ventilators spread across the three isolation centres located in Benin in Edo South, Irrua in Edo Central and Auchi in Edo North Senatorial districts.

This was made known by the deputy governor, Comrade Philip Shaibu who is the chairman, Edo State COVID-19 Taskforce Team.

In Delta, the State Commissioner of Information, Mr. Charles Aniagwu, said the government had dedicated 19 ventilators for the treatment of coronavirus, should the pandemic break out.

Fielding questions from journalists at an interactive session on COVID-19 update, he said the government made the provision despite the fact that there was no confirmed case of COVID-19 in the state at the moment.

"Ventilators become necessary when the attack becomes acute. Prevention is better and far cheaper. What is important at this moment is Personal Protective Equipment (PPE) and personal hygiene, which we are making concerted efforts to sensitize our people," he said.

Adamawa State has a total of five ventilators with two at the Federal Medical Centre, one at Adamawa-German Hospital, Yola and two at the COVID 19 Isolation Centre.

This is according to the Director of Public Health, Adamawa State Ministry of Health, Dr. Bwalki Dilli.

In Kwara, the state government said it has eight new ventilators in its 60-bed capacity isolation centre at Sobi Specialists Hospital, Ilorin.

"If any ventilator existed in Kwara, it was at the University of Ilorin Teaching Hospital, a federal institution," he said.

Bayelsa State said it currently has five ventilators at the moment to combat the ravaging coronavirus pandemic in the state.

The Director of Public Health in the state ministry of health, Dr. Yerinbuluemi Stowe, who disclosed this said the state government may acquire more ventilators in due course.

Out of the five ventilators, he said three were stationed at Federal Medical Centre (FMC) in Yenagoa, while two were at the state isolation centre located inside the Niger Delta University Teaching Hospital in Okolobiri.

In Katsina, our correspondent reports that there are only five ventilators available at the two designated isolation centres established for any eventualities from the COVID- 19 outbreak.

Three of them are located at the Federal Medical centre (FMC) Katsina, while two are at the state government-owned General Amadi Rimi Specialist hospital.

In Borno State, it was gathered that there are 15 functional ventilators and three mobile ventilators while in neighbouring Yobe State, the isolation centre at Sani Abacha Specialist Hospital, Damaturu has three ventilators, two oxygen concentrators and one physio-control defibrillator.

The Benue State Commissioner of Health and Secretary, State Action Committee on Coronavirus, Dr. Sunday Ongbabo, said there were six ventilators in the state.

According to the commissioner, four of the ventilators were located at the Federal Medical Centre in Makurdi, while the remaining two are at the isolation centre in Benue State University Teaching Hospital, Makurdi.

Bauchi State is said to have four ventilators in one hospital among the designated isolated centres for the patients of coronavirus.

A source at the ministry of health who crave anonymity told Daily Trust that there were four ventilators at the Abubakar Tafawa University Teaching Hospital (ATBU-TH).

But a reliable source in the hospital said, "ATBU-TH has only one ventilator but it was taken to the isolated centre where some people have been quarantined.

When contacted, the state Commissioner of Health, Dr. Aliyu Mohammed Maigoro, declined to comment saying, "I will not answer any questions on the phone. If you want clarification on the COVID-19 issues, let us meet at the media briefing."

The Infectious Disease Control Centre (IDCC) in Kakuri, Kaduna State and the Barau Dikko Teaching Hospital in the state have two functioning ventilators each, our correspondent gathered.

Daily Trust reports that the Kaduna State Commissioner of Health, Dr. Amina Mohammed-Baloni, had earlier said that the IDCC has been equipped with specialised equipment like ventilators, oxygen concentrators and monitors in preparedness for case management of COVID-19.

Ebonyi State has four ventilators, according to the Commissioner for Health, Dr. Daniel Umezurike.

In Gombe, the state Chairman of the Nigerian Medical Association (NMA), Dr. Kefas Zawaya, said the three isolation centres set up by the state government do not have functional ventilators.

"I can boldly tell you that Gombe State does not have up to three ventilators that are functioning to treat COVID-19 cases.

"Although we have functional ventilators at ICU of the FTH, Gombe but it cannot be released to the state government for the treatment of the coronavirus because they need them to take care of their patients," he said.

The Plateau State government said there were eight ventilators available in the state for coronavirus patients in the event the need arise. The Commissioner of Information and Communication, Mr. Dan Manjang, told Daily Trust that the state government had plans to buy additional five ventilators that would be sent to the three senatorial districts of the state.

No ventilator in Nasarawa, Kebbi

In Nasarawa, it was gathered that the state does not have ventilators specifically for COVID-19. A source said that the public hospitals in the state do not have any ventilator either, but this could not be independently verified as those who supposed to speak on the matter were not willing to talk.

According to one of the sources, the hospitals have informed the state ministry of health, which has also notified the government on the need to make provision for ventilators and other equipment.

The source, however, said the contract for the supply of ventilators had just been awarded.

The Commissioner for Health, Pharmacist Muhammed Ahmed Yahaya, did not answer his calls and did not reply to a text message sent to him on the issue.

In Kebbi, the State Commissioner for Health, Mohammed Jafar, said he could not give the figure of the ventilators available in the state at present, saying the state government had placed order for new ones.

He said he would only give the number of the ventilators after the new ones had all been installed.

Chinese Doctors In Nigeria for COVID-19 Fight Despite Opposition
Tagged:
Copyright © 2020 Daily Trust. All rights reserved. Distributed by AllAfrica Global Media (allAfrica.com). To contact the copyright holder directly for corrections — or for permission to republish or make other authorized use of this material, click here.