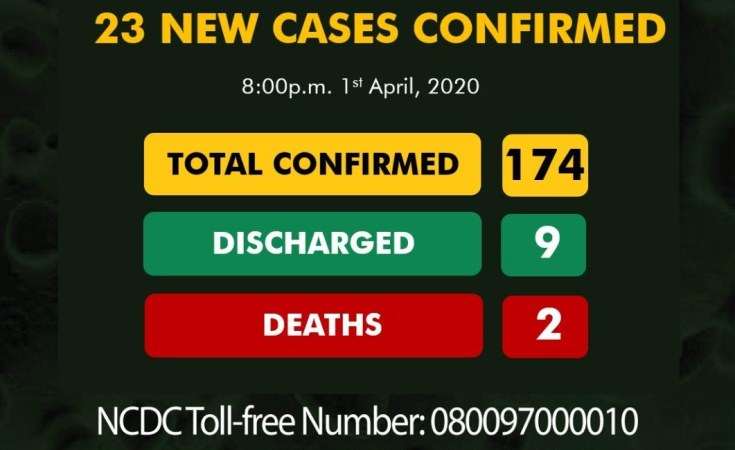 The federal government yesterday said it had tested over 2,000 persons for the COVID-19 across the country.

The Minister of Health, Osagie Ehanire, said this in Abuja at the third joint national briefing of the Presidential Taskforce Force on COVID-19.

He, however, said Nigerians had to be tested in one of the seven Nigeria's molecular laboratories for the result to be valid and that no other test result would be accepted from any other place.

Meanwhile, the Nigeria Centre for Disease Control yesterday put the number of confirmed cases of COVID-19 so far in the country at 174. The centre said nine cases had been discharged and two deaths recorded so far.

The Minister of Health said: "About 70% of those who have tested positive are males. The age range is between 30 and 60 years. However, we must note that both men and women of all ages can be affected."

On the nine cases earlier recorded yesterday afternoon, he said: "I know that there were 12 new cases, in fact, this is interesting for you to know that one of the vehicles intercepted, trying to enter Nigeria from Benin Republic, with many Nigerians on board. I think it was over 100, heading for Osun state.

"I think they said they were coming from Ivory Coast or Ghana, I'm not quite sure, and it is said that it was among those groups that we had 12 immediate new entrants, so they are imported cases.

'He also said the government had 1,000 bed spaces ready for isolation and treatment of mild to moderate cases in Abuja "which we can expand if need arises. We have ICU units ready in Gwagwalada and National Hospital for those who may have complications, especially those with underlying illnesses like tuberculosis, HIV, cancer, and also the elderly."