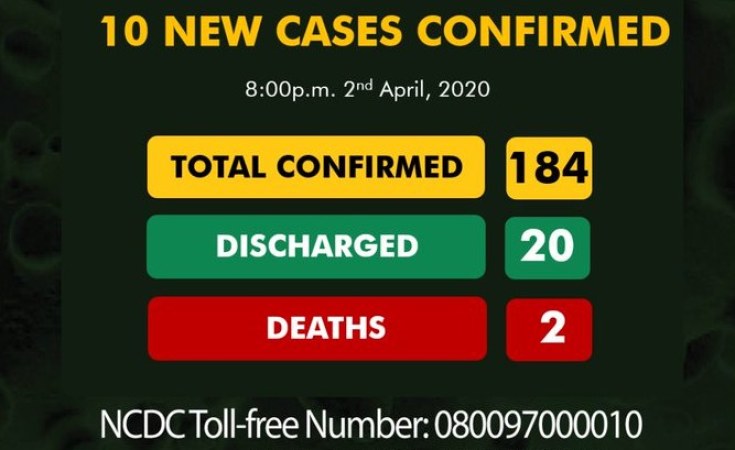 The Nigeria Centre for Disease Control has reported10 new cases of COVID-19 in the country, bringing the total number to 184 as of 8pm yesterday.

It said seven of the cases were in Lagos and three in Abuja.

The NCDC said 20 patients had been discharged; while two had died.

Earlier yesterday, the Minister of Health, Osagie, Ehanire, said coronavirus cases would rise dramatically as the government continued to trace over 5,000 people who had contact with confirmed cases.

Speaking in Abuja yesterday at the fourth joint national briefing of the Presidential Taskforce Force on COVID-19, he said: "As contact tracing and testing capacity are being ramped up, more and more cases will be found and the number of new confirmed COVID-19 cases is expected to rise dramatically."

He said the government was also worried about "persons, especially Nigerians, returning to the country through land borders, who run a higher risk of infection while in a confined space for a long time like transit in a crowded bus or car."

He said: "With 71 percent of the over presumed 5,000 or more contacts now traced, the number of confirmed cases will be rising dramatically. Contact tracing will still be intensified to reduce the number of outstanding cases."

Director-General, National Centre for Disease Control, Chikwe Ihekweazu, said contact tracing teams were able to take advantage of the restrictions to move very quickly in Lagos to reach all those listed.

He also said the NCDC had no reason to doubt the validity of the five new cases it confirmed in Akwa Ibom State on Wednesday.

He was reacting to the claim by the state's Commissioner for Health, Domini Ukpong, that nobody tested positive for coronavirus pandemic in the state.

Chinese Doctors In Nigeria for COVID-19 Fight Despite Opposition
Tagged:
Copyright © 2020 Daily Trust. All rights reserved. Distributed by AllAfrica Global Media (allAfrica.com). To contact the copyright holder directly for corrections — or for permission to republish or make other authorized use of this material, click here.