Guinea: "Boys have a role to play in ending violence against women" 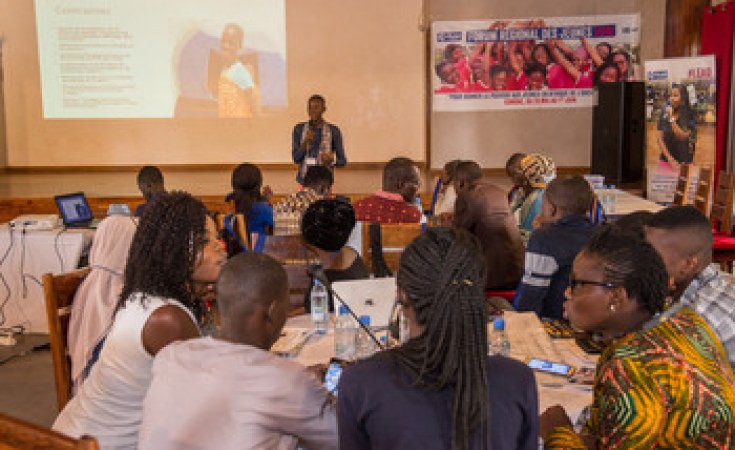 Ibrahima, 24, first started to question the traditional gender norms after seeing that his cousin, who was a girl, was not allowed to go to school because she had to stay home and do the chores. “We used to say, 'school is for boys, girls have to do household chores’, and this shocked me. It's since then I've been committed to defending the rights of girls.”

Growing up in a poor community in Guinea’s capital city Conakry, Ibrahima often witnessed instances of violence against women and girls - gender based violence is one of the most widespread human rights violations and a major obstacle to the development of women and girls, as well as to the well-being and development of their communities and societies as a whole.

It was in response to this alarming observation that Ibrahima, who holds a degree in legal and political science, became interested in the problems that affect women and girls, including early marriage, female genital mutilation and early school dropout.

At the age of 14, Ibrahima joined the Consultative Council of Children and Youth which is supported by Plan International with the aim of influencing leaders to take children’s rights into account, particularly the rights of girls.

"Boys have a role to play in ending violence against women. In Guinea, many girls are discriminated against because of their gender. They are the worst off. 1 in 3 girls are not in school, they are considered a burden to their families and their destiny is to marry young.

1 out of 2 girls marry before the age of 18, even though the law forbids it. Many others are married before the age of 15 and are deprived of school. I refuse to accept that this discrimination still persists and that is why I have been engaged in this noble fight since I was young.”

Ibrahima believes that for equality between girls and boys to become a reality, investment in formal and non-formal education is needed. Schools have a role to play in promoting equality between girls and boys by strengthening the teaching of gender equality in school and developing a good education policy to prevent the discrimination and stigmatisation of young mothers, instead facilitating their reintegration back to school.

To achieve this, the Ibrahima meets with families and community members to lobby for change. "We don't come with ready-made ideas, we don't judge anyone, we discuss and try to understand why some people accept this discrimination. They are often ill-informed about the laws in the country and the rights of girls."

Supported by the Plan International, Ibrahima is very active in the field. He relies above all on meetings with other young people to talk about inequalities between girls and boys - a way of involving them in the fight for equality.

Although aware of the injustices that still continue because of the weight of cultural traditions and practices, Ibrahima has seen some gains in terms of respect for the rights of children and girls in the country.

"There are improvements. With the new technologies, girls are much more active, they get information and can take courses online. Young women who were deprived of school are much more committed to their daughters' education. In reality, I am convinced that behaviour change begins within the family.”

“My two brothers and sisters have received the same education as me, and we are convinced that the fight for girls' rights is fair. In order to succeed in this fight, we must all act together and all be concerned," Ibrahima says.

About the Consultative Council of Children and Youth of Guinea;

Set up with the technical and financial support of Plan International with the aim of influencing leaders to take children’s rights into account, particularly the rights of girls, the children’s council has 41 registered members from all prefectures in Guinea.

The association carries out several activities, including holding community discussions on gender-based violence (child marriage, teenage pregnancy; female genital mutilation, etc) as well as educational talks on the social responsibility of young people in preserving peace and unity in Guinea.

What About Africa's Informal Sector During the COVID-19 Pandemic?
International Organisations