Nigeria Health Watch
Social distancing is one of the proven measures to limit the spread of coronavirus, so we must learn to change our behaviour to save lives.
Premium Times (Abuja)
By Bassey Udo

A former deputy governor of the Central Bank of Nigeria (CBN), Kingsley Moghalu, on Saturday stirred controversy on Twitter when he took on Nigerians who criticised his recent wish that crude oil prices, which plunged to the lowest level since 1989, should remain low.

On Wednesday, crude oil prices of the Organization of Petroleum Exporting Countries (OPEC) basket of 12 crudes dropped to about $16.05 per barrel before staging a dramatic recovery to about $34 per barrel late on Friday.

The unexpected price rally followed reports of an emergency meeting called by Saudi Arabia, OPEC's largest producer, scheduled for Monday next week with Russia and other non-OPEC allies, to attempt to broker a truce on production output cuts to strengthen prices and stabilize the declining oil market.

But, in a tweet through his handle:@MoghaluKingsley to justify his earlier prayer that oil price should crash to the bottom, the Young Progressive Party (YPP) presidential candidate for the 2019 presidential elections, said:

"Oil is now at $34, and some mumus are saying thank God He didn't answer my prayer that oil should crash. Too bad they missed the point (which is why we have mumus.) Oil may get to $50, and then down again to $30. What will you say then? No way to run an economy. #Diversifyeconomy"

Many Nigerians who reacted to the comment condemned Mr Moghalu for insulting his critics over the issue.

Susan Henshaw (@SusanHenshaw50) said: "What did you or your government do towards diversifying the economy or discouraging the dependence on oil. ONE thing. ONE. What suggestion have you put forward in all the years since, other than espousing the break-up of Nigeria and other bad faith?"

Margaret Ikpeme (@MargaretIkpeme8) said: "Okay Prof. But you don't need to call your fellow citizens who don't reason along with you mumu. You are a leader and may come to seek our votes. Please carry us along until we can comprehend like you. Your experience is far above some of us, especially in this economic growth.

Olaudah Equiano® (@RealOlaudah) "Sir I understand your frustrations, but you need to manage your emotions better. This tweet could've been done better, without those abusive words. Remember you mentor people out here. Remember also your pedigree, & where you're aspiring to. Shalom."

General Adio Dudu (@balogzy_1) said "As expected, no suggestions yet. For someone who had the opportunity to do things differently you failed yourself but you now have the temerity to call those who see things differently from you "mumu", that belittled you.

AWATY (@clement_bolaji) "It is very unfortunate that a former Presidential candidate calling his fellow citizens "mumus". The same people he would have be their president if he had won the election. It simply tell us your level of emotional intelligence and how irrational and incompetent you are."

Ifeanyichukwu S.Agwu (@IfeanyichukwuSA) "Gosh I can't imagine this man was a Deputy Governor of the CBN. What did you do there please? Sit on the table and look serious. How many years were you there? I didn't hear one dot or tittle of reform in your time at the CBN. Please go reform your LGA1h".

In his response to a question by Arinola Awokoya (@iyaboawokoya) on: What government should do further diversify the economy, Mr Moghalu called for the devaluation of the Naira and the scrapping of the FOREX restriction policy of the CBN on 42 items.

Devaluation of the Naira, he said, should have been done proactively by the CBN a few years ago, and not waiting until a crisis forced on the country.

"When you depend on crude oil price to determine the levels of your reserves, as we do, your national currency is not determined by any real underlying value, as in a complex manufacturing economy that produces value-added things and exports them.

"Such exports bring in foreign exchange and help determine the value of the currency (Naira here). When you devalue also, because of the size and potential Nigerian market will also trigger an influx of foreign exchange seeking to make profit from a "cheap" Naira.

"This also applies with international trade, because the "cheapness" of the Naira will lead to more orders for Nigerian manufacturers from foreign countries.

"This was not done. But, we must now do it, because whenever the oil price sneezes, we catch pneumonia. It was not done because of political interference with the central bank.

"The "big man" hates devaluation. Because a "strong" Naira (when we don't produce/ export practically anything seriously other than crude oil) helps us pay school fees of children abroad and subsidizes the elite.

"Unfortunately, this has proved unsustainable because it's lazy economics, or populist economics that can make you politically popular, but has impoverished us all because it leaves us dependent on a raw commodity.

Also, Mr Moghalu said the CBN should scrap the 42 items FOREX-access restrictions, and instead allow the fiscal authorities (Federal Ministry of Finance) and the trade authorities to use fiscal and trade policies to impose high tariffs on imports of "luxury" items.

"We will make more revenues from such tariffs. If big men and women want foreign toothpicks, no problem. They should just pay 10-50 times more than the locally produced ones, and we earn revenue from their expensive tastes.

"Then we should now give local manufacturers, especially those who are exporting (to earn FOREX) and show proof of export orders subsidies, and other incentives, to encourage them.

If we follow this trajectory, exports will become the "in-thing" instead of importation, and the economy will progressively diversify. This is why I "pray" for the oil price to remain low, so we are forced to do what we should have done despite 40 years of lip service but haven't," he said. 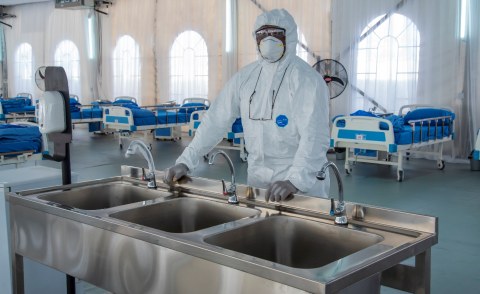