Nigeria: Life after Boko Haram: 'I help others to cope with their trauma' 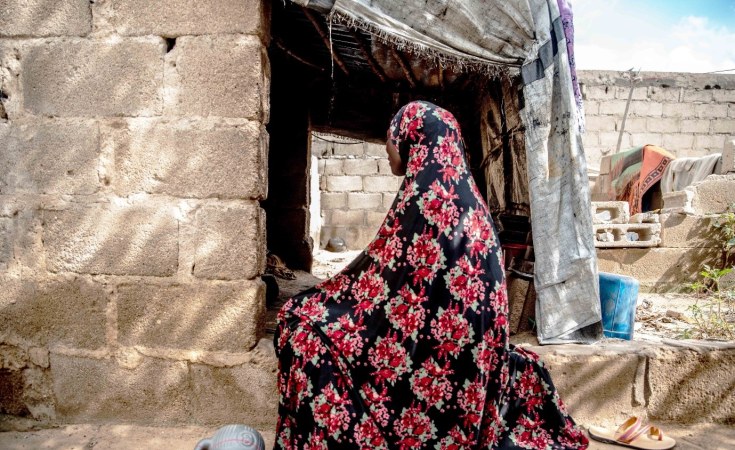 Miriam*, 25, got married at the age of just 16. She was abducted from her home in Nigeria by Boko Haram at the age of 22 when she was five months pregnant. She managed to escape one month before giving birth to her son.

Abandoned by her husband upon her return, she now lives in a camp for internally displaced persons in Borno state, where she has been slowly rebuilding her life over the past three years.

With the help of counselling sessions and psychosocial support provided by child rights and humanitarian organisation Plan International she has started to rebuild her self-esteem and become a key member of the Community Based Child Protection Committee supported by the organisation.

As well as helping to identify children in need of support, she is also working hard to reduce the stigma directed at girls who, like herself, have been associated with Boko Haram – many of whom are living alone in the camp as single mothers.

Here, she tells her story.

“The day I was abducted, we heard gunshots, but we didn’t run because people said it wasn’t Boko Haram, it was just the civilian defence force. They had come disguised in the Civilian Joint Task Force uniform so we thought they had come to help us.

They got us into boats to cross a river – and that’s when we realised that they were Boko Haram.

From then on, we were in their custody. There were about 300 of us – all women and girls. My husband had run when he heard them coming and had left me on my own.

They started forcing us to get husbands, but I was pregnant at the time so I was left alone.

To get food, they would go and kill people and take their food for us to eat, but sometimes there would be no food for many days. I was moving into my third trimester at the time and things were not going well for me.

One day, the men went out on an attack and we were left under guard when the army arrived and our guards ran and left us. By then, I was around eight months pregnant, so me and an older woman teamed up because we couldn’t run like the others.

We walked for two days in the bush and whenever we saw a farm we would eat whatever was there. On the third day we met a man farming onions and he showed us the way to get out of the wilderness.

He had a motorbike and took us to a village, but when we got there, it was deserted. From there we walked all the way to a nearby town. It took us three days to get there.

When we reached the town, we just slept under a tree the first night because we were exhausted and we knew that nobody would accommodate strangers in their homes since everyone was suspicious of each other because of the situation.

In the morning, we started to look around town in case we saw anyone we knew and eventually – and fortunately – I saw my oldest sister’s husband and he found a car to take me to Maiduguri.

When I got to there, I found my parents and then my husband heard about me and came to find me and took me to live at his brother’s house. He had a business in another town and said he would return there and send support for me. What I found out then was that when he had run from Boko Haram, he had done so with his second wife, so he was going back to live with her.

I waited for two weeks and didn’t hear anything and then his brother asked me to leave his home, so I went to live with my parents and I gave birth there.

We sent word to my husband - twice, but he didn’t come. When he didn’t even come for the naming ceremony of my child, we thought something must have happened to him. I secured some money to travel to the town where he lived with his second wife. When I got there I met him and his other wife and they gave me a very cold reception.

They didn’t give me much food and treated me very badly. Some nights I would get nothing to eat. I decided I needed to get divorced. But my husband didn’t seem to think that we needed a divorce and made me stay with him for a long time until he eventually agreed.

I went back to Maiduguri to stay with my parents, but there wasn’t a lot of business for them and they didn’t have enough money to support me and my son. So that is why I ended up in this camp.

Life here is not comparable to my hometown. Back there, we had everything we needed. We had land, we knew everyone, we had a business. It’s not like we were rich, but we had enough to get by. But here, we are reliant on assistance. We can’t farm. We only survive on what the aid organisations can give us. My life before the crisis cannot be compared to how it is now.

My biggest concern now is to get married because I am divorced and, being a woman, if you are not married, life is difficult. For people to respect you, you need to be in your husband’s house.

But I’m getting on with my life. In my free time I like being with other people and helping to ease their trauma. I watch films to help me forget about things. And I like sewing caps, but when I’m doing it alone, I still think about things that I don’t want to think about.

What is helping me the most is the counselling that I get from Plan International. It has helped rebuild my self-esteem and the work I have been doing as a volunteer has given me a new sense of purpose.

Since I’ve been here I’ve become a member of the Community Based Child Protection Committee so I help to identify children who need support and I also run sessions on child protection.

Some of the cases I come across are girls who have returned from Boko Haram and I like being able to help them. I try to help reduce the stigma they face, and any new cases that I come across, I let Plan International team know so that they can provide them with support.

To begin with, we did have a lot of issues here in the camp, but ever since Plan International came and started involving us in different activities and providing us with support and training in psychological first aid, it has been much better because everyone is working through the challenges together. If there’s an issue that someone identifies then we discuss it at meetings and work out how to address it collaboratively.

Besides counselling we’ve had dignity kits with wrappers, hijabs, slippers, toothpaste and things like that. And I’ve learnt things like how to maintain my house, how to cook safely, good sanitation practices, and how to take care of my son – and I now share what I’ve learnt with other households too.

I go from house to house with the hygiene kits and teach them everything I have learnt. How to clean their toilets, how to cope with trauma and how to look after their children: how to talk to them, how to help them learn, and how best to help them in general. And not just our own children, but other children in the community too. There are a lot of things that I didn’t know before, so Plan International has really helped me and I feel proud to be able to help make things better in the community as well.

I also like going to the Child Friendly Space (CFS) to help with the children – playing with them, stopping them becoming too rowdy. We used to have a lot of children fighting and ending up in the police station, but ever since we started running the CFS they no longer fight because they go there to play. They really like the CFS.

I keep myself busy. Even the women who live alone, who live in tents without their husbands, I’ve managed to encourage them to come out and socialise. Because there were some people here who used to say that they were sleeping around, and we’ve stopped that gossip. And even the children in the community respect these girls and women now. They have got their respect back because they are involved in the community and people appreciate the work they are doing.”

Plan International is an independent child rights and humanitarian organisation that advances children’s rights and equality for girls.

We believe in the power and potential of every child. But this is often suppressed by poverty, violence, exclusion and discrimination. And it’s girls who are most affected. Working together with children, young people, our supporters and partners, we strive for a just world, tackling the root causes of the challenges facing girls and all vulnerable children.

We support children’s rights from birth until they reach adulthood. And we enable children to prepare for – and respond to – crises and adversity. We drive changes in practice and policy at local, national and global levels using our reach, experience and knowledge.

We have been building powerful partnerships for children for over 80 years and are now active in more than 75 countries.