Africa: Coronavirus - Africa Braces for Impact 'Like Nothing We Have Seen'

GCIS/Flickr
A resident of Mamelodi in South Africa during the COVID-19 lockdown.
Thomson Reuters Foundation (London)
By Nita Bhalla

Nairobi — With ventilators scarce and social distancing a luxury, COVID-19 cases are rising on the continent. But some hope lessons from Ebola have left governments better prepared

With densely-packed slums, poor access to water, widespread disease and weak health systems, Africa will struggle to control the coronavirus, but health experts hope the continent's youthful population could help in the fight against COVID-19.

The pandemic has been slow to arrive in the world's poorest continent but now cases are rising exponentially as the virus spreads within local communities.

So far 51 of the continent's 54 nations have detected cases, bringing the total number to more than 9,000 with over 400 deaths, says the Africa Union's Centre for Disease Control.

World Health Organization (WHO) officials said not only were implementing measures such as social distancing and regular hand-washing major challenges for many Africans, the lack of vital equipment such as ventilators also posed a major concern.

"There is an enormous gap in the numbers of ventilators needed in African countries for this COVID outbreak," said Matshidiso Moeti, the WHO regional director for Africa.

"It is certainly an area of great challenge in African countries coming. We have seen how it has been one of the biggest challenges that more developed countries with more resources are having."

South Africa, Algeria and Egypt have recorded the highest number of cases with about 1,955, 1,250 and 1,170 respectively but health experts say numbers are likely to be much higher as most nations do not have the diagnostic or testing capabilities.

Kenya, for example, has detected about 160 cases to date - with government officials predicting this could surge to 10,000 by the end of April.

For sub-Saharan Africa - where more than 40% of the 1.2 billion population live on less than $1.90 a day, and malaria, malnutrition, anemia, tuberculosis and HIV/AIDs are widespread - health experts fear a tsunami is coming.

"Africa has much more vulnerability. When I hear it's older people, that's nonsense from the point of view of vulnerable communities," said Joia Mukherjee from the charity Partners in Health, pointing to the continent's heavy disease burden.

"The death toll in my opinion will be 4-5 times higher than even in Wuhan. We are looking at a very deadly pandemic in Africa," added Mukherjee, associate professor at Harvard Medical School, at an online panel at the Skoll World Forum last week.

Sub-Saharan Africans have the worst health in the world, according to the International Finance Corporation (IFC). The region has 11% of the world's population, but carries 24% of the global disease burden.

Health experts fear such diseases already weaken immune systems and could stifle the ability of patients to fight off a COVID-19 infection - resulting in much higher case loads of young people contracting the virus, unlike in the West or China.

This could quickly overwhelm Africa's already rudimentary and under-resourced hospitals. The continent accounts for less than 1% of global health expenditure and 3% of the world's health workers, added the IFC.

Aid workers are already sounding the alarm across the continent - particularly in nations wracked by conflict.

"Health-care systems across Africa could collapse under the added weight of the pandemic," said Patrick Youssef, incoming regional director for Africa for the International Committee of the Red Cross.

In northern Mali, for example, 93% of health-care facilities have been completely destroyed, said Youssef, adding that the few remaining community health centres were struggling to treat illnesses like malaria and could not treat COVID-19 patients.

While in the Central African Republic (CAR), there are just three ventilators for a population of five million people, according to the charity, the Norwegian Refugee Council (NRC).

"Rich nations are in panic mode stating that thousands of ventilators will not be enough," said David Manan, NRC's country director. "It just brings to light how poorer nations like the CAR don't stand a chance in the fight against COVID-19."

As well as grappling with the onslaught of COVID-19 patients expected to flood hospitals and clinics, health experts warned that containing the spread of the disease will also pose serious obstacles for African governments.

Many African cities are home to sprawling, densely populated informal settlements, where the two key solutions of containing the spread of the coronavirus - regular hand-washing and social distancing - are a luxury.

In the Kenyan capital Nairobi, for example, there is little access to clean water or space for self-isolation in vast settlements such as Kibera which houses more than 170,000 people most of whom work as domestic workers, drivers, security guards.

Families of more than five live in tiny one-room shacks made of wood and corrugated iron. There is no piped water so residents must buy it from private tankers, and a lack of toilets means nearby streams are filled with sewage.

Only 14% of Kenyans have hand-washing facilities with soap and water at home, according to the United Nations children's agency, UNICEF.

It is no better in Africa's crammed refugee and displacement camps hosting millions fleeing conflict, persecution or climate-related disasters such as droughts or floods.

South Sudan, which is recovering from a six-year conflict, detected its first case of the coronavirus on April 3, sparking concerns over the impoverished nation's ability to contain the disease within the camps, and amongst the wider population.

"Only 34% of households in the country are able to access a borehole or tap stand in less than 30 minutes."

High rates of poverty and no financial security net will additionally pose challenges for Africans as governments impose curfews and lockdowns, leaving tens of millions of informal workers unable to earn an income and feed their families.

"This doesn't just mean that people are more susceptible to becoming ill from the coronavirus, but with lockdowns, border closures and the ability to access food curtailed, the impact of COVID-19 on Africa could be like nothing we have seen before."

African nations such as Somalia in the east to Mali in the west are also burdened by both conflict and erratic weather linked to climate change which will likely hamper their ability to slow the spread of COVID-19, said aid workers.

The continent does, however, have some advantages which could help the response to the pandemic, health experts said.

Lessons learned from Ebola outbreaks in west and central Africa, for example, have left governments such as Sierra Leone, the Democratic Republic of Congo and Liberia better equipped in terms of screening, contact tracing and surveillance.

Community health workers in far-flung villages are being mobilised in countries such as Senegal to use their experience during the Ebola outbreak to conduct public health campaigns.

Aid agencies say cash transfers and livelihood support mechanisms set up during the outbreak can also be resurrected to help vulnerable communities affected by COVID-19.

Similar experiences in other nations, such as South Africa in responding to the AIDS epidemic, could also help.

More than half of sub-Saharan Africa's population is aged between 15-64, while more than 40% is below 14 years, World Bank data shows.

Only 3% of Africans are aged 65 years or older, compared to China and Italy where the elderly account for 11% and 23% of the population respectively.

Patrick Amoth, director general at Kenya's health ministry, admitted it could be an asset, but also warned of the country's high disease burden.

"One thing that could work to our advantage is the fact that our population is more youthful, so potentially it is possible that our people will be able to catch the virus but probably just it will pass on as a mild illness," he said.

"What may work against us, of course, is our weak health system and our disease burden especially HIV. Those who are not adherent to their medicines would have lack of viral suppression and therefore could be at risk."

(Reporting by Nita Bhalla; Editing by Belinda Goldsmith. The Thomson Reuters Foundation is the charitable arm of Thomson Reuters, and covers the lives of people around the world who struggle to live freely or fairly. Visit http://news.trust.org) 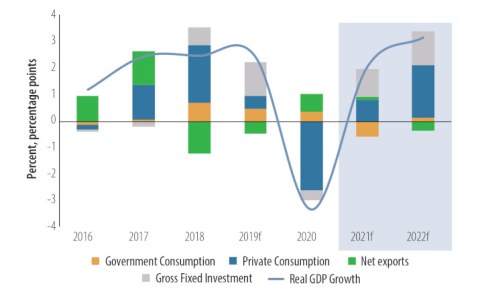 COVID-19 Exacerbates Poverty Risks in Poorest Countries
Tagged:
Copyright © 2020 Thomson Reuters Foundation. All rights reserved. Distributed by AllAfrica Global Media (allAfrica.com). To contact the copyright holder directly for corrections — or for permission to republish or make other authorized use of this material, click here.