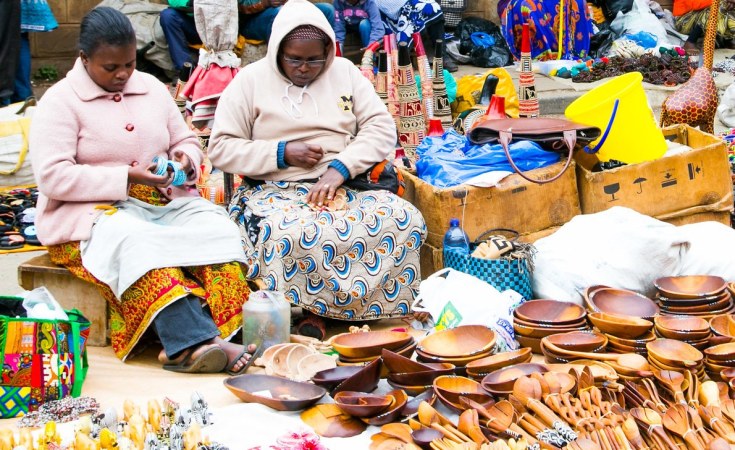 An attempt by police to disperse traders from the Mumias open air market ended tragically on Tuesday, with the death of a man reportedly hit by an exploding tear gas canister.

Mr Idris Mukolwe, a 45-year-old tomato vendor, died at the scene as multi-agency security officers enforcing the ban on open air trade in Mumias town descended on the traders, hurling teargas canisters at them.

Business came to a standstill for the better part of Tuesday following the incident.

Mr Marthias Lumumba, a hawker at the market said police officers ambushed the traders and started beating them mercilessly.

"We scampered for safety but they hurled teargas canisters at us as we fled. One hit Mukolwe and exploded in his face," Mr Mulumba said.

"He ran out of air and started suffocating. When we went to his aid, police again hurled another canister at us forcing us to run away, leaving our friend alone. That is how he died."

"It is like a game they enjoy when they see someone dying from their brutality. It was an ugly scene. We watched our colleague die with little help to offer him," he said.

Kakamega Governor Wycliffe Oparanya banned operations at all open-air markets in the county as a measure to control the spread of the Covid-19 disease.

But the traders argue that they can observe social distancing and operate at least a meter apart in line with national directives.

About a week ago, a 24-year-old trader fell victim to police brutality at the market in Mumias.

Her mother Ms Florence Makale said she left home early that morning for the market.

"While at my place of work in Butere, she called to inform me that she had been shot by a police officer in Mumias. I rushed to Mumias and found her in hospital in the company of police officers," Ms Makale said.

She claimed the police officers apologised and pleaded with her not to expose them.

Speaking to the Nation from her hospital bed, Ms Muhatia said she heard a gunshot and shortly after, felt some coldness on her hand and abdomen.

"Blood started oozing out of my abdomen and the hand. That was when I realised I had been hit by a bullet. I was rushed to the hospital by good Samaritans," she said.

"She sustained a cut from the bullet that pierced through her abdomen and fractured the fingers. We are waiting for the surgeon to correct them. Otherwise, she is out of danger," she said.

Ms Muhatia's mother wants the government to take charge of her daughter's treatment and ensure the arrest of the police officer who shot her.