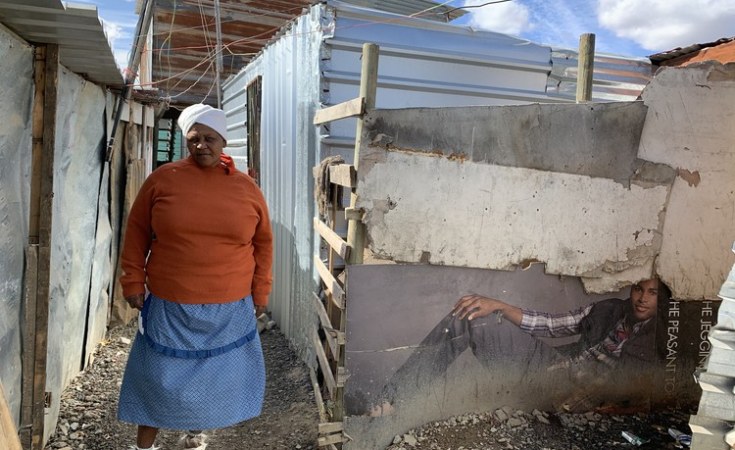 "They should consult us before making these statements", says community leader

Government plans to move tens of thousands of people from informal settlements across the country to slow the spread of Covid-19 has been met with scepticism in Dunoon in Cape Town.

National Department of Human Settlements spokesperson, McIntosh Polela, told GroundUp on Monday that "de-congestion will be done in the four provinces".

"The informal settlements are in the Metros of Durban, Cape Town, Buffalo City, Johannesburg, and Tshwane," said Polela.

In Cape Town, the settlements to be "de-densified" are Greater Kosovo and Dunoon, according to a statement by Human Settlements MEC Tertius Simmers. He said this would affect about 10,000 residents. Three-storey Temporary Residential Units would be erected to re-house those moved.

"1,500 of these units will be erected in Dunoon and 2,000 in the Greater Kosovo area." The elderly and people with disabilities would be prioritised, he said.

Asked when the Dunoon residents would be relocated, spokesperson for the department Marcellino Martin said there was no time-frame yet.

"The new area must be prepared and as soon as this has been completed, relocations will commence," he said.

He would not say where the residents will be moved to, or which overcrowded areas in Dunoon will be affected.

"Over the next few days, we will start engaging affected communities and explain how the process will unfold. We... call on residents to work with us, as this will undoubtedly assist in combating the spread of Covid-19," said Martin.

But residents of Dunoon's Siyahalala informal settlement on the side of the railway line, were annoyed that they had not been consulted earlier.

Community leader Thokoza Mxotwa has been living in Siyahalala informal settlement since 2008, in a one-room shack which she shares with her husband and three grandchildren.

She says she has heard of the plans to move people but residents have not yet been consulted. "We don't know anything, we don't know where we are going to be relocated and we don't know whether that place is safe. We can't leave our homes to go to stay somewhere we don't know. We do not know what is going on," she said.

"They should give us time to think about it and they should consult us before making these announcements."

Resident Mgcina Tyopo shares a three-room shack with his wife and three children. He has been living there since 2007.

"We were not even consulted about these plans," he said. "We need to be informed before making these announcements."

He said since the outbreak of the coronavirus, no water or protective equipment had been brought to the settlement. Yet when the police and soldiers patrolled, people without masks were chased back into their homes, he said.

"Since the outbreak, we have not seen anyone coming to provide masks and gloves and potable water," he said. "The thing they are saying, that we must move, will not be an easy task for them."

"Internally, much work is underway in the City, looking at all high risk areas and groupings," she said.

GroundUp tried to get information from the City of Tshwane's spokesperson, Lindela Mashigo, and from eThekwini spokesperson Msawakhe Mayisela, without success.