The country has witnessed an improvement in the supply of roller meal in retail shops since the beginning of 21 day lockdown but this has resulted in arbitrary behavior by vendors who are taking advantage to stock the precious commodity for resale at exorbitant prices.

A snap survey by 263Chat has revealed that most vendors are conniving with shop operators to buy large quantities of mealie meal to stock and resale.

"Mealie meal vendors are benefiting more than genuine people in need of the commodity. They come in large numbers to cause confusion here, they then control the queues by accommodating their proxies first and by the time we buy they would have taken large quantities," said Marlon Mabwe of Sunningdale

Others accused shop workers of working in cahoots with the vendors as they also seek to maximise on the situation.

"These people are conniving with members of staff from the supermarket. This is evidenced by their conduct when we have an orderly queue but as they open they dismiss us saying they cannot take orders from customers. By the time that they issue out cards to customers you find that you are on number 70 or 80 yet you were among the first 10 customers," lamented Marvellous Shumbarume another resident

A visit to Mbare Musika where residents were queuing for the same product hundreds mainly basic commodity vendors were milling around a shop despite being told that it had run out.

"They are saying it has run out but they only served less than twenty people yet a 7 tonne truck offloaded more than 200 bags of roller meal. I believe they are up to something and they should be investigated.

"They think that we do not know what is happening, these people are working together with vendors who in turn take the mealie meal to the streets charging in US dollars at an exorbitant price," said Jabulani Katerera of Mbare

Some vendors who declined to be named said Covid-19 is a blessing in disguise as they can make money.

"This is a blessing in disguise, I have managed to get a few bags of maize meal and will be selling them to those who haven't got anything. This is where I get money to sustain my family," said one vendor. 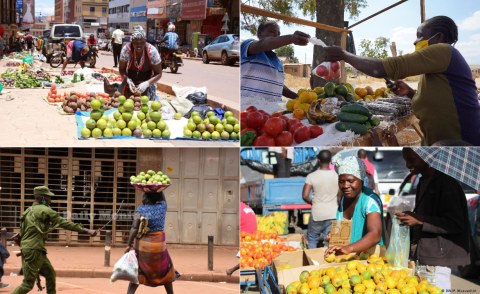 Here's What It Takes to Make Africa's Informal Food Markets Safer
Tagged:
Copyright © 2020 263Chat. All rights reserved. Distributed by AllAfrica Global Media (allAfrica.com). To contact the copyright holder directly for corrections — or for permission to republish or make other authorized use of this material, click here.