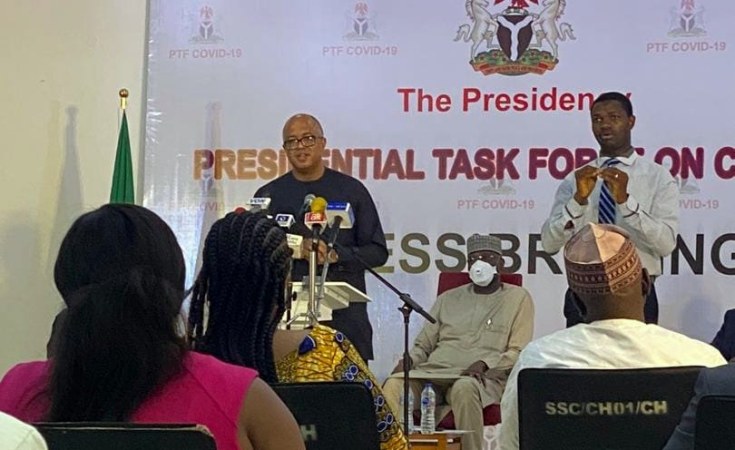 Focusing on prevention and public information works against COVID-19. It can work against violent conflicts.

Nigerian leaders struggling to reduce violence in the country's myriad conflicts should take some lessons—from their own response to the coronavirus.

While Nigeria's COVID-19 ordeal is still unfolding, its eventual casualties unknown, the Nigeria Center for Disease Control (NCDC) and several governors have modeled the ways to reduce catastrophic outbreaks. The simple existence of a national prevention center with sustained resources has proven critical. Key officials have applied vital principles, acting at the first sign of danger and keeping the public widely informed. These are precisely the ways to confront Nigeria's other national plague—of violence.

The NCDC and government officials responded immediately and transparently when an NCDC laboratory confirmed the first coronavirus infection on February 27. The health minister, Dr. Osagie Ehanire, announced the news the next day. He described the case—an Italian man who worked in Lagos and had returned from a visit to Milan days earlier—and the actions the government was taking. The notice instructed Nigerians on precautionary measures and warned them not to spread misinformation.

One day later, the NCDC issued a FAQ sheet and a public health advisory, and formed a National Rapid Response Team to help state authorities with contact tracing and intensified monitoring of travelers entering Nigeria. The center continues to offer frequent updates and well-organized information on its website. It dispels rumors quickly via news media and social media such as Twitter and WhatsApp. A key to NCDC's successes is that Nigeria created and sustains it as an institution with a focused mission, a long-term vision for protecting public health, and the resources to build nationwide networks that it has used in other campaigns, for example against Ebola in 2014 and more recently with lassa fever.

At the same time, key state governors—including those of Plateau, Kaduna and Lagos State—have issued helpful statements. Governor Babajide Sanwo-Olu of Lagos, the state with the largest number of confirmed COVID-19 cases, has informed citizens of developments and explained certain decisions. Other governors will have to exhibit the same level of leadership as the crisis unfolds, especially as cases are identified in parts of the country's north where the socio-economic indices are lower and health infrastructure is not as developed as in Lagos. Both the NCDC and several governors have enlisted community leaders to help inform their publics and quash misinformation.

Consider the contrast: When the militant group Boko Haram killed at least 50 Nigerian soldiers on March 23—an unusually deadly attack amid the decade of violence that has devastated most of the country's northeast—officials made little effort to explain to the public what was happening or why, and what was being done about it. The Defense Ministry and Army issued only vague statements to news media. Political leaders provided little guidance or reassurance.

Attacks by Boko Haram killed more than 17,000 people between 2009 and 2017. Land-use battles between farmers and cattle herders killed some 2,000 people in 2018 alone. Nigeria's leaders could reduce these losses by applying lessons from the early response to the coronavirus.

To be sure, Nigeria's elite may be more responsive to something like the coronavirus pandemic because it puts them more personally at risk—even if only through restrictions that limit their ability to travel to and from Europe or the United States.

Nigeria's deadliest violent conflicts occur far from the elite power centers such as Abuja or Lagos. But like any epidemic, violence ultimately threatens everyone in any society. Nigerians who have seen some effective, early responses to COVID in the country should prepare to apply the underlying principles to Nigeria's plague of violence, too.

Oge Onubogu is senior program officer for Africa Programs at the United States Institute of Peace (USIP) where she leads programming in Nigeria.

Next Story
Tagged:
Copyright © 2020 United States Institute of Peace. All rights reserved. Distributed by AllAfrica Global Media (allAfrica.com). To contact the copyright holder directly for corrections — or for permission to republish or make other authorized use of this material, click here.