African Leaders Stand With WHO Boss Tedros After Trump Attack 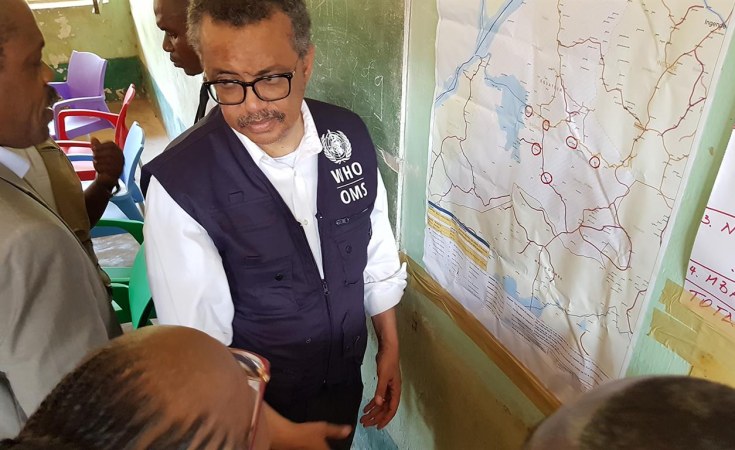 Cape Town — African leaders are coming out in defence of the World Health Organisation (WHO) and its Director-General Tedros Adhanom Ghebreyesus after US President Donald Trump attacked the organisation for being "China-centric" and "mishandling" the novel coronavirus outbreak. Trump was quoted as saying: 'We're going to put a hold on money spent to the WHO."

But when the US leader was asked if that was a good idea considering the world is in the midst of a pandemic, he said he was only considering a possible suspension.

Chairperson of the African Union (AU) Moussa Faki Mahamat tweeted that he is "surprised to learn of a campaign by the US govt against WHO 's global leadership.

"The @_AfricanUnion fully supports @WHO and @DrTedros. The focus should remain on collectively fighting #Covid19 as a united global community. The time for accountability will come," Mahamat wrote.

"Our global priority is to save lives," Ethiopian President Sahle-Work Zewde replied on Twitter. "@WHO under @DrTedros effective leadership, are delivering on their mandate at a time we need them most. Let's give them the space. @covid19  is killing many. We must support & protect the most vulnerable. Now is not the time for blame game."

President of Namibia Hage G. Geingob responded to Mahamat's tweet with this message: "I agree with you, my brother @WHO, under the stewardship of @DrTedros, has shown itself to be a true flag-bearer of multilaterarism when global solidarity has become critical. Let's hold hands in this crucial moment and focus on what matters, saving lives."

Trump and his supporters have been suggesting that the WHO was withholding information about coronavirus, saying that the organisation has "been wrong about a lot of things". He named the closing of borders to China as a decisive action the United States took on January 31, however the WHO's declaration of COVID-19 as global pandemic was announced on January 30.

Rwanda's President Paul Kagame also weighed in, retweeting Mahamat's statement and adding: " Totally Agree ,and asking this; Is it Dr.Tedros, WHO, China ... under attack or all of them together? Let's focus on the fight against this pandemic, whoever sh'd be held acc'ntable will come later and done properly. Save us too much politics Africa does not need it. Who does?"

President of South Africa Cyril Ramaphosa responded: "The most potent weapon against #COVID19 and its devastating health, social & economic impact is international cooperation & solidarity, which is why the exceptional leadership displayed daily by @WHO & @DrTedros during an unprecedented global public health crisis is incalculable."

Nigerian President Muhammadu Buhari tweeted: " The Government of Nigeria fully supports @WHO and its Director General @DrTedros . We are grateful for the leadership and guidance the WHO has provided as we respond to this pandemic. With #COVID19 , we are in an existential battle, requiring global solidarity."

GCIS/Flickr
President Cyril Ramaphosa sees off quarantined citizens after they were repatriated from Wuhan in China due to the outbreak of the novel coronavirus.

"We are incredibly lucky to have Dr. Tedros at the helm of WHO during an unprecedented global crisis."

The continent's COVID-19 cases rose past 10,000 today, while the United States is at 369,253 active cases of the novel coronavirus, according to Worldometers.

"We are incredibly lucky to have someone like Dr. Tedros at the helm of WHO during an unprecedented global crisis," said Dr. Senait Fisseha, Chief advisor to the director general of the WHO, in an interview with AllAfrica. "His resolute focus on the communities and people affected and the evidence to stem the spread is exactly the kind of leadership we need", she said, "now more than ever."

Catherine Kyobutungi, executive director at the African Population and Health Research Center in Kenya, made clear her thoughts on the matter, tweeting: "The US govt has been burning bridges everywhere for the last 3 years and now they are spoiling for a fight in the midst of a global pandemic. Perhaps this showdown will show DJT just how much clout the USA has lost in the rest of the world. #IstandWithTedros".

"I am glad to see world leaders voice their support for him and this institution that does so much to keep us safe, often unseen," said Fisseha. "It is important that we stay united in global solidarity and focused on the evidence base to stop the spread of COVID, rather than fall prey to political volleys."

AU Reaffirms Support for WHO Amid COVID-19 Pandemic, Attack By Trump