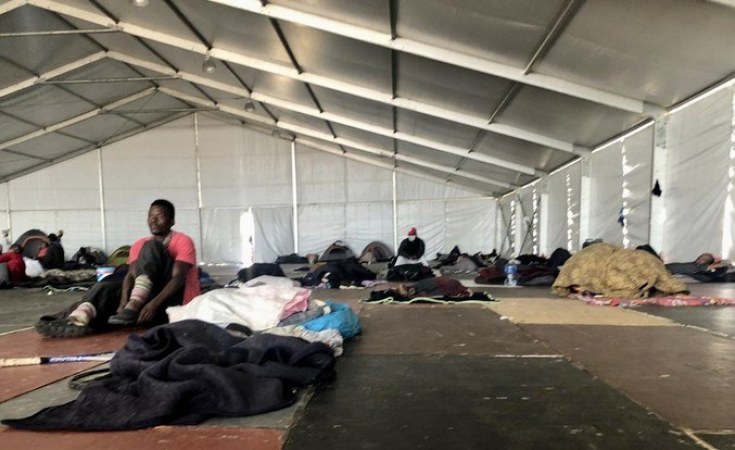 Lucas Nowicki/GroundUp
Hundreds of homeless people have been moved to the City of Cape Town’s temporary site at the Strandfontein Sports Grounds, as part of the response to COVID-19. Upon arrival, people are screened for the novel coronavirus. There are no other health services for the many underlying health issues, including mental health, substance dependency, and chronic illness. There are many people in the camp with chronic illnesses, such as HIV and TB, and there is no identifiable way that people with these conditions can get access to treatment. There is no protective equipment, such as masks, and there is one basin at each marquee for people to wash their hands.
GroundUp (Cape Town)

The site is large and the City asserts that it will hold about 2,000 people. Smith said that there were currently 1,495 people living on site. There are four major marquee tents set up, which constitute the main sleeping areas. There are also smaller tents scattered about.

Is there enough space?

Badroodien in response to a question about social distancing at the camp said that about 16m2 is allocated per person. But we estimated the size of the tents, which are neatly divided into 16m2 segments, and this appears to be impossible.

Does the City have enough space for all street people?

Badroodien estimates the street people population to be "almost 6,000 people". The Culemborg shelter has been extended for the lockdown to cater for an additional 500 people bringing its capacity to over 700 people. With Strandfontein's capacity of 2,000 this still leaves a massive shortfall. There were plans to place homeless people at Paint City, but currently the refugees who were occupying the Central Methodist Church are staying there.

Are people free to leave the Strandfontein site?

Smith has stated that people are free to leave the site; no one is held at Strandfontein against their will, but on the other hand he has also said that any homeless person that leaves the complex would be liable for arrest, by SAPS, and prosecution under the lockdown regulations. But SAPS spokesperson Captain Ezra October told GroundUp that SAPS would not arrest a homeless person for being homeless.

Are homeless people safer at the City sites than where they usually stay?

Smith did however say that more medical services were planned, including a doctor and two medics present during the day, and an EMS team at night. At present nursing staff are leading the on-site medical response.

Smith said that Hassan Khan of the Night Shelter, who is administering one of the tents, has increased the food portions in order to help addicts who are suffering withdrawals with cravings. Smith said that according to SHAWCO, addiction rates at the site were over 50%.

But there is no naloxone, the preferred treatment for heroin withdrawal, on site, though there is anti-nausea and mild pain relief medication. GroundUp consulted a healthcare professional who said that a massed camp was not a good environment for a person in withdrawal.

Smith said that there were 40 to 50 City Law Enforcement officers and 50 to 60 private security officers per shift. The City emphasised its commitment to ensure the safety of residents of Strandfontein.

Plato did not reveal the budget for the site but said it was in the "tens of millions".

Originally the City was not going to allow media on site after Thursday's press conference, but Smith said that future visits by journalists could be arranged if the City is given notice.

Media were chaperoned from a briefing tent, which forms part of the City's operational command structure, to a screening tent. Volunteers from SHAWCO were performing screening, as well as health checks.

There was an altercation with law enforcement when some of the people at the camp tried to break down a fence.

Many people staying in the marquees shouted to the journalists that they wanted to leave, that they weren't happy, and that they weren't being fed enough. At one tent, homeless people began attacking the surrounding fence, breaking through in places, which prompted a response from City Law Enforcement.

Some officials openly blamed the media for the commotion. One said: "This is what you create."

(Incidentally when Tuesday's unrest broke out, a GroundUp reporter was the only media on site, and not identifiable as such.)

Dean Norton has been staying at the site a few days.

Deon Norton, 52, has been at the camp for a few days. He said the tents were ice cold at night. He had previously been living in Claremont, where he had a tent and mattress. When police picked him up, they told him he could leave those items behind as he was "gonna get new stuff", he said.

Norton said there was little to do during the day. He was glad to be able to get his arthritis medication from the mobile pharmacy, as he had run out.

The media visit concluded with a short piece of political theatre, as the ANC's Cameron Dugmore quarrelled with Smith over protection for law enforcement and conditions on site.

Meanwhile housing activist group Ndifuna Ukwazi published an open letter to Richard Bosman, the City's Executive Director of Safety and Security and Disaster Management. The letter expressed concern with the health condition at the camp and its viability. The letter described a number of inadequacies and argued that this type of camp exacerbated, rather than alleviated the risk of infection.

NOTE: Smith asserted, following GroundUp's report on Tuesday of a riot that was quelled, that it was untrue that rubber bullets were used. However, our reporter was on site and he and other witnesses heard and/or saw shots being discharged at least twice.

Kenyans Call For COVID-19 Lockdown as Masks Made Mandatory
Tagged:
Copyright © 2020 GroundUp. All rights reserved. Distributed by AllAfrica Global Media (allAfrica.com). To contact the copyright holder directly for corrections — or for permission to republish or make other authorized use of this material, click here.