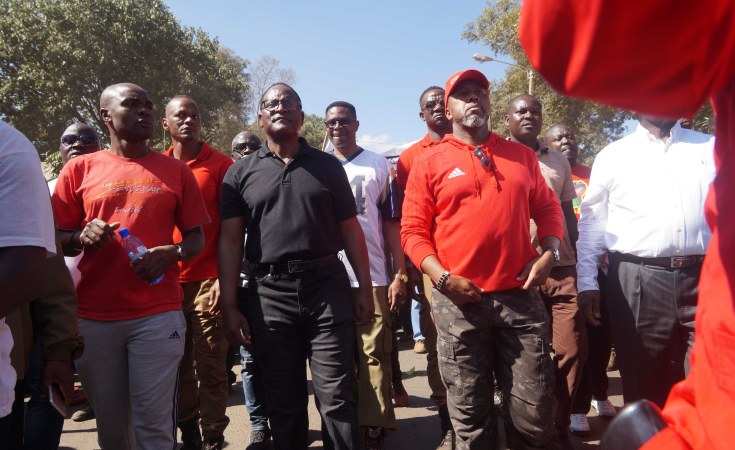 BLANTYRE, MALAWI - Malawi's Electoral Commission (MEC) says it is pushing ahead with voter registration for July’s presidential election re-run, despite a government-ordered suspension because of the coronavirus.

Malawi has so far eight confirmed cases of the virus and one death. Health officials worry people grouped for registration and voting could easily spread the virus but the MEC says only it has the authority to halt the election process.

Mwafulira said all MEC staff wear protective equipment such as face masks and that hand sanitizers, soap, and water are provided for the public.  The MEC last week launched voter registration for a July re-run of last year’s presidential election. Health officials criticized going ahead with the election process at a time when they are trying to check the spread of coronavirus.

Heath Minister Jappie Mhango says up to 50,000 Malawians could die from the disease if not enough action is taken to stop the viru

Mhango, who also chairs a cabinet-level committee on the coronavirus, on Tuesday announced voter registration would be suspended.
“What we are saying is, you can only have an election where people are enjoying good health.  We are a government and as a government we have a duty to protect our citizens. Assume tomorrow we are attacked by foreign forces - will you go to register? We are already in a war situation; we are fighting the virus. This is war. You cannot subject your citizens to hazardous situation just because you want an election, for what?” asked Mhango.
However, the MEC argues only it or the courts can halt the election.

Opposition parties, whose court case saw last year’s election results overturned in February, have been pushing for the election to go ahead, despite the risk.
United Transformation Movement Party President Saulos Chilima made his argument Wednesday during a televised press conference. He said the group that was talking about the suspension of the electoral process was lying.  That is because the laws of Malawi do not allow them to suspend the registration process, he argued.  That is the responsibility of the electoral commission.  What I know, said Chilima, is that the exercise is still on and I urge people to go and register. But health rights groups say allowing voters to gather for registration and polling contradicts key coronavirus prevention measures.

Executive Director for Malawi Health Equity Network George Jobe says the public is getting mixed messages from authorities.  “There have been messages on social distancing to be observed and also [against] gatherings. And at the same time, we saw there was registration. Isn’t that breaking the rules given out? So, the two activities are contradicting and confusing to the general public,” Jobe said.
Malawi’s Constitutional Court nullified last year’s presidential election citing massive irregularities in the re-election of President Peter Mutharika. The court ordered fresh polls by July 3. If allowed to continue, voter registration would continue until June 7.

Malawi Fresh Elections in July May Be Postpone

Malawi Court to Hear Mutharika's Appeal Against Election Re-Run
Tagged:
Copyright © 2020 Voice of America. All rights reserved. Distributed by AllAfrica Global Media (allAfrica.com). To contact the copyright holder directly for corrections — or for permission to republish or make other authorized use of this material, click here.