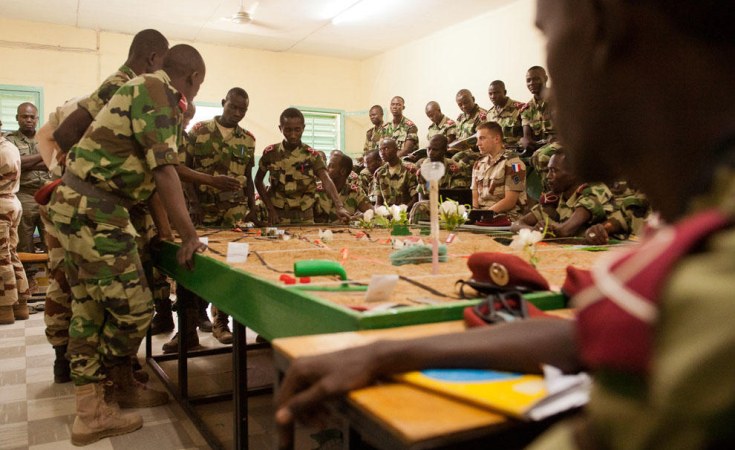 The Chadian government has said its army will continue to participate in regional Multination Joint Task Force (MJTF) targeting Boko Haram and other jihadist groups, as well as the UN peacekeeping mission in Mali, following President Idriss Deby's suggestion it might withdraw its troops.

Chad is a key contributor to a multinational force in the Lake Chad basin fighting Nigerian terrorist group, Boko Haram, and another farther north in the Sahel zone that counters militants linked to al-Qaeda and Islamic State.

Reuters reported that Chad is also the largest troop contributor to the UN peacekeeping mission in Mali, known as MINUSMA, with more than 1,400 soldiers there as of January.

In a speech broadcast on Friday that followed heavy fighting between the army and Boko Haram, Deby said: "From today, no Chadian soldier will take part in an external military operation."

However, in a statement, Chad's Foreign Affairs Ministry said Deby's remarks had been misinterpreted and only meant the army would no longer conduct unilateral operations beyond its borders in the Lake Chad basin.

"It was never a question for Chad of disengaging from the (anti-Boko Haram) Multinational Joint Task Force or from the G5 Sahel joint force, much less from (MINUSMA)," the statement said.

Chad's armed forces are among the most respected in the region, a reputation forged during decades of war and rebellions, and honed in a 2013 campaign against al-Qaeda-linked Islamists in the deserts of northern Mali.

The members of the G5 Sahel and its main backer France are desperately trying to bolster the force, which has done little to reverse deteriorating security across the semi-arid strip of land beneath the Sahara Desert.

The Boko Haram insurgency, which erupted in north-east Nigeria in 2009, continues to grind on, with attacks frequently spilling over into Chad, Cameroon and Niger.

In late March, Boko Haram carried out its deadliest-ever attack on Chad's army, killing nearly 100 soldiers in an ambush. The army said last Thursday that it had killed as many as 1,000 Boko Haram fighters in a subsequent military campaign.

Chad, a member of the MNJTF against the terrorist groups, had issued Nigeria and Niger Republic an April 22 ultimatum to reoccupy territories Chadian troops seized from Boko Haram because it would withdraw its forces from those locations by that date. Deby said he had warned the two countries that his forces would move out of the bases seized from the terrorists by April 22, regardless of whether their armed forces moved in or not.

He said his troops deployed to fight terrorists in the Lake Chad region and the Sahel will no longer take part in military operations outside national borders.

"Our troops have died for Lake Chad and the Sahel. From today, no Chadian soldiers will take part in a military mission outside Chad," he told national TV in Arabic. His remarks were broadcast in French on Friday.

The Chadian president's position depicted widening cracks in the coalition, which he said was the outcome of poor commitment to the war against insurgency by other coalition partners.

Derby had led his troops in a counterattack that decimated about 1,000 Boko Haram fighters, prompting the leader of the terror group, Mr. Abubakar Shakau, to appeal to his fighters not to be deterred by the onslaught against them by the Chadian troops.

Chadian armed forces said they had wound up the operation against Boko Haram in the Lake Chad region, saying 52 soldiers have been lost and a thousand jihadists killed.

The operation was launched after 98 Chadian soldiers were killed in a Boko Haram raid on a base at Bohoma in the lake's marshlands on March 23, the biggest one-day military loss in the country's history.

The four countries bordering the lake - Nigeria, Chad, Niger, and Cameroon - and Benin Republic had in 2015 set up the military coalition, MNJTF, to fight Boko Haram.

But Chad, which has some of the strongest armed forces in the Sahel, showed frustration with the MNJTF following the Bohoma losses.

"Chad is alone in shouldering all the burden of the war against Boko Haram," Idris said last weekend.

Double Crisis for Chad's Displaced People - UN
Tagged:
Copyright © 2020 This Day. All rights reserved. Distributed by AllAfrica Global Media (allAfrica.com). To contact the copyright holder directly for corrections — or for permission to republish or make other authorized use of this material, click here.