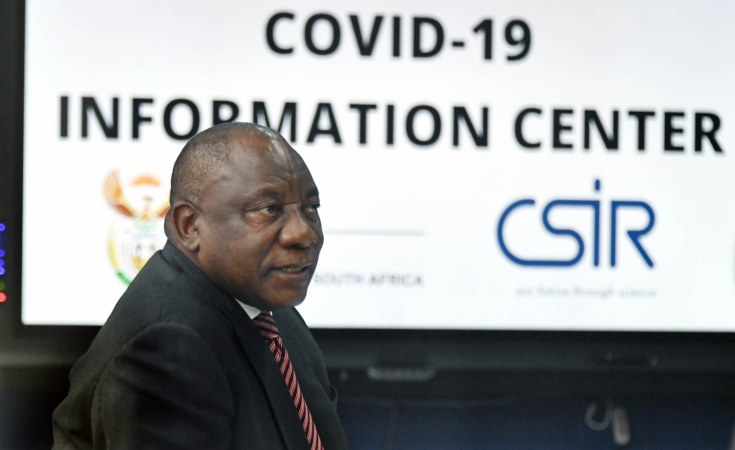 GCIS
President Cyril Ramaphosa visits the Department of Health (DoH)’s COVID-19 Information Centre, a data centre set up to monitor and track the spread of COVID-19 in the country. The centre is housed in a secure facility at the Council for Scientific and I
News24Wire (Cape Town)
By Azarrah Karrim

On Monday, Health Minister Zweli Mkhize, accompanied by various experts and the chairperson of the ministerial advisory group, Professor Salim Abdool Karim, took the public into their confidence and provided a breakdown of South Africa's efforts to tackle the spread of Covid-19 as well as plans for the road ahead.

Here are some important points Karim made:

The trend in Covid-19 infections in South Africa has taken a unique path, unlike that of other countries, Karim said.

Before the lockdown was implemented on 26 March, South Africa experienced an exponential curve, meaning that there was a rapid rise in cases. But, on that date, instead of seeing the curve continue, it was somewhat flattened.

A decline in the daily rate of cases occurred, followed by a plateau in the curve.

"Not a single country that we've seen has this kind of turn," Karim said.

As the rate of infection plateaued, the number of tests conducted increased, Karim said.

While a lack of testing makes a small contribution to South Africa's unique trajectory, a major factor is due to a "genuine effect", Karim said.

This reduces the possibility that a lack of testing caused a "false" flattened curve.

3. The lockdown has been effective

More likely, Karim explained, the rate of infection declined because the lockdown reduced the opportunities for the virus to spread in communities.

A first wave of infections brought about by international travellers led to a second wave of community transmissions. However, Karim explained that this, surprisingly, did not lead to an exponential growth of infections.

Instead, South Africa's community transmissions are not "spreading like wildfire", creating a unique curve.

Preventing a rapid community transmission and flattening the curve is what the government has been aiming to do with various interventions, including hand washing, social distancing and the implementation of the lockdown.

Aggravating factors for community transmissions are high-density hubs where there is a high potential for the spread of the virus.

These hubs include Johannesburg, Cape Town and eThekwini.

Although it's a best case scenario, it is highly unlikely that the virus will simply disappear, Karim said.

What's more likely, is that once the lockdown ends, there will be an exponential growth in infections.

Despite the success in stemming the spread of Covid-19 in communities, Karim said the "difficult truth" remained that an exponential spread of the virus was unavoidable.

"We cannot escape this epidemic."

"If we allow it to grow unchecked you will see what we see in New York - thousands of people trying to get into a hospital for cases, and we simply do not have enough ICU beds or ventilators or medical care...

"We simply cannot provide care to so many people at one time, so that is the challenge we might face," Karim said.

We now have time to truly flatten the curve and South Africa is in a unique position to deal with Covid-19.

"We chose to be proactive; we have chosen to go out there and do active case-finding.

"Only South Africa has done this," Karim said.

This delay has also bought South Africa time to find new diagnostic tools and get new treatments and vaccines.

Everyone needs to follow the lockdown rules while the government monitors community transmission, Karim said.

If the average number of day-to-day cases increase between 10-16 April, the lockdown will continue.

Should this average stay the same, the government will use active case-finding to determine whether to continue with the lockdown.

Karim announced that once a month South Africa will have a national surveillance day during which a 5% sample will be collected from a small number of schools, mines and companies.

The number of samples and tests could be increased if the government sees fit, Karim said.

Within the government's medical care response, access to healthcare is limited for poorer communities.

Millions of patients who have underlying health conditions, like HIV/Aids, are also a concern because they are vulnerable to infection.

South Africa's Covid-19 epidemic will occur at the same time as the flu epidemic, making it more confusing for people to distinguish between flu and Covid-19.

The elderly, particularly those older than 70, are also a concern.

Finally, Karim added that medical staff will be prepared for the exponential curve. This means getting ready makeshift ICUs, ventilators and personal protective equipment - a challenge dealt with worldwide.