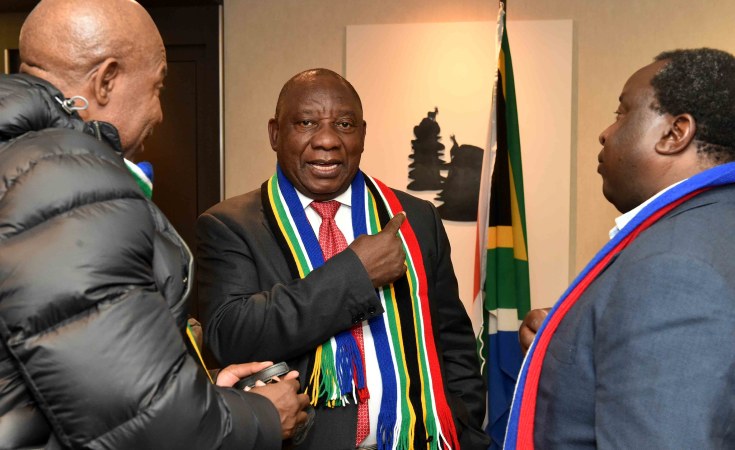 Presenting South Africa's budget vote in Parliament on 26 February, Finance Minister Tito Mboweni forecast that the country would grow by 0.9% in 2020 and at an average of just over 1% for the next three years. Global economic growth would come in at 3.3% for 2020, in line with the October 2019 International Monetary Fund (IMF) forecast. Mboweni only briefly mentioned the coronavirus, noting that its impact on Asia was uncertain.

Today all of this seems impossibly optimistic and the world has, by all indications, already entered into a recession. The Economist Intelligence Unit (EIU) expects that the global economy will contract to -2.2% in 2020, a difference of more than five percentage points compared to the IMF's forecast quoted by Mboweni. The United Nations Department of Economic and Social Affairs expects a more modest contraction to -0.9%.

Among the major economies, the EIU expects only India and China to register positive growth in 2020 and the prospects for North America and Europe remain uncertain. On 6 April the SA Reserve Bank estimated that the country's economy would contract between -2 and -4% in 2020. The EIU forecast is for -3%.

A week before Mboweni's February speech the Institute for Security Studies (ISS) released its own long-term forecast of South Africa's growth prospects to 2044 using the International Futures forecasting system. The ISS research paper, South Africa first! Getting to Thuma Mina, modelled the impact of transitions in health, education, a more rapid shift to renewables, modern industrialisation and agricultural renewal in the former 'homelands'.

In a way, long-term growth forecasting is easier than short-term forecasts as it reflects the impact of structural factors on economic prospects. In contrast to the volatility of the market, these structural factors change slowly.

South Africa has been caught in a classic middle-income growth trap and is steadily falling further behind the average for high-growth middle-income countries. The reasons stem from the apartheid legacy but were worsened by the 2007/8 global financial crisis and the impact of poor governance and state capture. It occurs despite the country's demographic dividend and substantial natural assets.

Looking to the future, the constraining impact of electricity production was factored in, which according to the Council for Scientific and Industrial Research will ease only in 2023. This limits economic growth in the medium term to the 1% Mboweni used in his budget speech.

None of this has changed with COVID-19, except that it's going to be much harder to climb out of the deep hole that South Africa dug for itself. Although the analysis was done before the virus became a global pandemic, the ISS still believes South Africa could average 2.1% growth out to 2044, and could improve that average to 2.6% in a positive Thuma Mina scenario - with appropriate economic reform.

The short- and medium-term prospects are, however, more uncertain. Lack of investment is a large constraint on growth. In the wake of the recent decision by Moody's (and others) to relegate South Africa to junk investment status, it's harder to attract investment. Without substantial additional foreign and local investment, South Africa will struggle.

Investment requires confidence in government, predictability in economic policies and decisively stepping away from policies such as land redistribution without compensation and meaningless discussions about nationalising the Reserve Bank. Foreign direct investment is drying up everywhere and South Africa will need to work hard to even maintain interest.

Even if it constrains the spread of COVID-19, SA will pay dearly for this unexpected event

The most surprising finding in the ISS analysis was the extent to which poor health and bad educational outcomes constrain long-term growth. Changing health and educational outcomes are generational challenges. They shift slowly, and even with the best policies and effective implementation they'd only lift South Africa's growth prospects from 2035 onwards.

Many analysts have speculated about the impact of COVID-19 on South Africa - but we don't yet have enough data. Only significantly higher rates of testing could reveal that. It's unclear how the country's climatic conditions and seasonality will impact on the spread of the virus, the relationship with South Africa's high communicable disease burden, and how things will pan out in crowded informal settlements and across different age cohorts.

Meanwhile the debate about the nature and length of the virus-induced global recession and what strategies governments should adopt continues. Will the world's economy recover in 2021, reflecting the potential for a V-shaped recovery as forecast by the EIU? Are we in for a longer U-shape with recovery perhaps only likely in 2022?

Or are we set for an L-shaped long-term depression bearing in mind that it took several years for the global economy to recover from the 2007/8 financial crisis? And what of the prospects of recurring waves of infection presenting analysts with the prospects of a W-shaped growth scenario if we cannot find and roll out a vaccine in the years that lie ahead?

What is clear is that South Africa, like most countries, will pay dearly for this unexpected event, even if it is successful in constraining the spread of the virus through an extended lockdown strategy. Certainly South Africa's government has been remarkably communicative and decisive in its reaction to the pandemic, but the damage done by economic contractions of -2.5% or -5% in 2020 and possibly over a longer period would be considerable.

A 2020 contraction of South Africa's growth to -2.5% would see roughly two million more South Africans categorised as extremely poor in 2021 compared to 2019. If the economy contracts by -5% that number could increase to over 2.5 million.

Average income per person would decline by roughly R5 500 (-2.5%) or R12 000 (-5%). On top of this would be the associated increase in mortality due to the virus, which is still largely unknown. Hunger and poverty would translate into several thousand additional poverty-related deaths as people literally starve to death.

South Africa is at a crossroads. A perfect storm of bad governance, economic policy indecisiveness, COVID-19 and Moody's recent downgrade highlight difficult choices for the country. Hence the decision, while extending the lockdown until the end of April, to carefully allow the maximum economic activity possible.

The bright side is that the ruling African National Congress has shown it is possible to be decisive even amid the entrapment of the tripartite alliance. The potential of a Thuma Mina high-growth scenario remains achievable but will require the same level of commitment and decisiveness to economic growth as the coronavirus has had - and then sustaining that commitment year-on-year for successive decades.

There Is a Dire Need to Boost SA's Stimulus Package