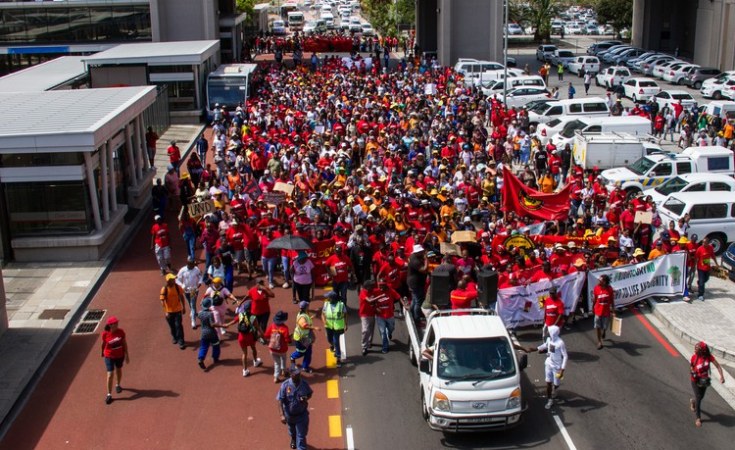 Ashraf Hendricks/GroundUp
Hundreds of protesters under the banner of Cry of the Xcluded marched to the Civic Centre, then Parliament, on Budget day, demanding that government deal with the crisis of unemployment.
The Conversation Africa (Johannesburg)
analysis By Dr Gilad Isaacs

As government, economists, activists, business leaders and the public debate the size and scope of government support to the COVID-19 hit economy, it is worth asking a simple question: what is the impact of government spending?

This forms part of a wider debate over whether South Africa should continue on the path of austerity - cutting expenditure with the aim of reducing debt - or undertake a fiscal stimulus - spending with the aim of growing the economy.

Recent research by Professors Enno Schröder and Servaas Storm from Delft University of Technology throws useful light on this question. The research was prepared for the Institute for Economic Justice's on-going research into the viability, scope and nature of an appropriate fiscal stimulus for South Africa. The research was undertaken before COVID-19 hit. It is even more relevant now.

The research shows that for every R1 billion government spends, gross domestic product (GDP) increases by R1.68 billion and 6,900 jobs are created. This means that spending 6% of GDP, R305.6 billion, would increase GDP by R513.4 billion and support the creation of 3,542,460 jobs.

Thus government spending is able to grow the economy, to the extent that it could lower the debt-to-GDP ratio. It also shows that additional government expenditure could sustain the economy through the current crisis period.

Does the economy have room for expansion?

The International Monetary Fund and South Africa's national treasury argue that the country's poor growth performance over the past decade is due to supply-side factors. These include infrastructural bottlenecks in electricity generation and supply, over-regulated (formal) labour markets, and increases in product market concentration (as seen in rising profit mark-ups).

The IMF and treasury therefore support budget cuts, labour market deregulation and tax cuts, all of which purportedly will promote private-sector led and inclusive growth.

Here the assumptions lead to the conclusions obtained. If the South African economy is assumed to be supply-constrained then naturally only supply-side interventions such as lowering labour costs will enhance growth. If this is the case, so the argument goes, then fiscal stimulus, which aims to raise demand in the economy, is a blunt tool, providing little opportunity for economic revival.

But this does not factor in the room for economic expansion that clearly exists.

According to the country's statistics agency, Stats SA, utilisation of production capacity - the capacity of the economy to produce goods and services, for example, through factory output - is on the decline. Between 2018 and 2019, production capacity declined by 2%, with eight out of ten manufacturing sectors showing a decrease.

At the same time, unemployment is unconscionably high, at 29.9% in the last quarter of 2019, and inflation is falling, now below the middle of the South African Reserve Bank's target range.

It is true that infrastructural shortages such as expensive internet or inefficient rail transport can constrain economic performance. But targeted fiscal expansion - investment in free broadband or investment in rail freight services - can remove these bottlenecks and expand supply capacity, while also boosting demand.

In their first estimation, increasing demand in the economy (via government spending) will initiate additional production. That will require more labour input (a direct effect). The higher demand for labour services will increase labour income. This will cause higher consumption spending in a particular industry (an indirect effect) and in connected industries (an induced consumption effect).

The results of this first technique indicate that a fiscal stimulus of R1 billion will raise South Africa's GDP by R1.5 billion and create 6,100 jobs. This is in line with previous studies using this technique.

In their second estimation, they include an induced investment effect. This refers to a change in output, income and employment that would come from firms investing a fraction of the additional profits earned in supporting industries.

For this technique, the estimated income multiplier shows that R1 billion increases GDP by R1.87 billion and generates 7,700 jobs.

The authors prefer an average of the two techniques, showing that a fiscal stimulus of R1 billion will generate R1.68 billion extra income and create 6,900 new jobs. This is because the first technique leaves out investment effects, but the second overestimates these because the data does not distinguish between private-sector and public investment.

Yet the path that the South African government has chosen is to reduce rather than increase government expenditure.

South Africa's 2020 budget proposes, over the next three years, tax relief and rebate measures combined with reductions in public spending of approximately R48 billion (when taking account of both government cuts and increases, and comparing these to what an inflation-based increase would be). The argument goes that austerity will help revive the stagnating South African economy and kick-start economic growth by inspiring "confidence" in the business sector and global financial markets and contribute to the sustainability of public debt. This is the conventional wisdom.

Another view has it that austerity has in fact contributed to the slow growth of the South African economy and to the growing income inequality experienced in the 2010s. Schröder and Storm argue that continued fiscal tightening is counter-productive to the aim of raising the country's long-run growth performance.

In fact, the multipliers above suggest that the proposed cuts in public expenditure, of R48 billion, will likely reduce South Africa's GDP by R81 billion over the next three years 2020-2022. This amounts to a decline in GDP growth of around 0.5 percentage points, accompanied by the likely destruction of around 330,000 jobs.

The 2020 austerity budget is socially and economically destructive.

The present context has made the picture more complicated, but this analysis even more essential. It has become clear that the economic fallout from the COVID-19 pandemic, and measures taken to stop its spread, will be massive. The economy could shrink by as much as 8.3%, some estimates show. This calls for bold interventions by government.

These interventions will not take the path of a traditional economic stimulus as the lockdown and associated measures purposefully attempt to slow the economy. Rather, the economy is being put on life support.

This life support must ensure that a viable economy still exists when the spread of COVID-19 is eventually contained. This will require an unprecedented increase in government spending. It's therefore essential to know how effective each rand of government spending will be in sustaining GDP.

South Africa's Medium-Term Budget Leaves Most Cold
Tagged:
Copyright © 2020 The Conversation Africa. All rights reserved. Distributed by AllAfrica Global Media (allAfrica.com). To contact the copyright holder directly for corrections — or for permission to republish or make other authorized use of this material, click here.