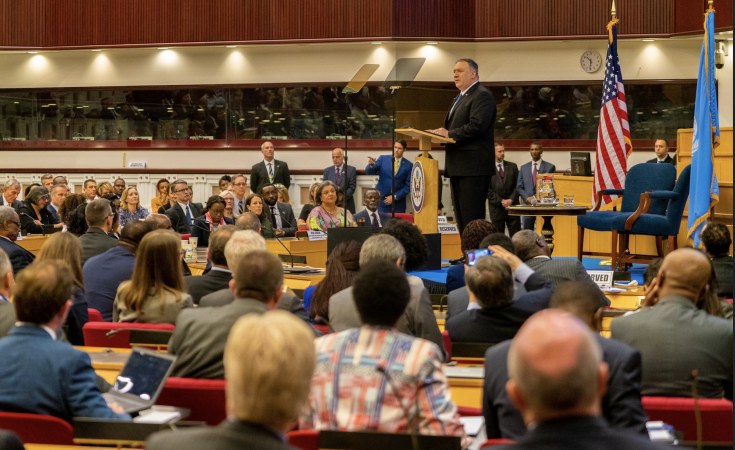 I will never hesitate to take any necessary steps to protect the lives, health, and safety of the American people. I will always put the well-being of America first.
President Donald J. Trump

President Donald J. Trump is holding the World Health Organization (WHO) accountable by putting a hold on United States funding.

President Trump is placing a hold on all funding to the WHO while its mismanagement of the coronavirus pandemic is investigated.
The American taxpayers provide $400 million to $500 million in funding to the WHO each year, but the WHO has failed them.
China, on the other hand, provides just around one-tenth of the funding that the United States provides.
The American people deserve better from the WHO, and no more funding will be provided until its mismanagement, cover-ups, and failures can be investigated.
President Trump will continue fighting the coronavirus outbreak and will redirect global health aid to others directly engaged in the fight.

The WHO’s response to the coronavirus outbreak has been filled with one misstep and cover-up after another.

Despite the fact that China provides just a small fraction of the funding that the United States does, the WHO has shown a dangerous bias towards the Chinese government.
The WHO repeatedly parroted the Chinese government’s claims that the coronavirus was not spreading between humans, despite warnings by doctors and health officials that it was.
Taiwan contacted the WHO on December 31 after seeing reports of human-to-human transmission of the coronavirus, but the WHO kept it from the public.
The WHO praised the Chinese government’s response throughout January and claimed there was no human-to-human transmission, despite the fact that doctors in Wuhan were warning there was.
The WHO decided on January 22 that the coronavirus did not pose a Public Health Emergency of International Concern, all while praising China’s response.
The WHO put political correctness over life-saving measures by opposing travel restrictions.
The WHO made the disastrous decision to oppose travel restrictions from China and other countries—despite applauding travel restrictions within China itself—leading to further spread of the virus internationally.

The WHO has longstanding structural issues that must be addressed before the organization can be trusted again.

The WHO has shown it was not prepared to prevent, detect, and respond to a severe infectious disease crisis like this.
The WHO lacks the structure to ensure accurate information and transparent data sharing from members, which makes it vulnerable to misinformation and political influence.
The United States seeks to refocus the WHO on fulfilling its core missions of preparedness, response, and stakeholder coordination.
The United States is also calling for reforms to promote transparency and data sharing, hold member states accountable for abiding by the International Health Regulations, increase access to medicines, and counter China’s outsized influence on the organization.

Previous Story
Senior Administration Official on COVID-19 in Africa and the U.S. Response
Next Story

Senior Administration Official on COVID-19 in Africa and the U.S. Response

Previous Story
Tagged:
Copyright © 2020 United States Department of State. All rights reserved. Distributed by AllAfrica Global Media (allAfrica.com). To contact the copyright holder directly for corrections — or for permission to republish or make other authorized use of this material, click here.