Guinea's Elections Had a Clear Winner. but Its Contest for Power Isn't Over. 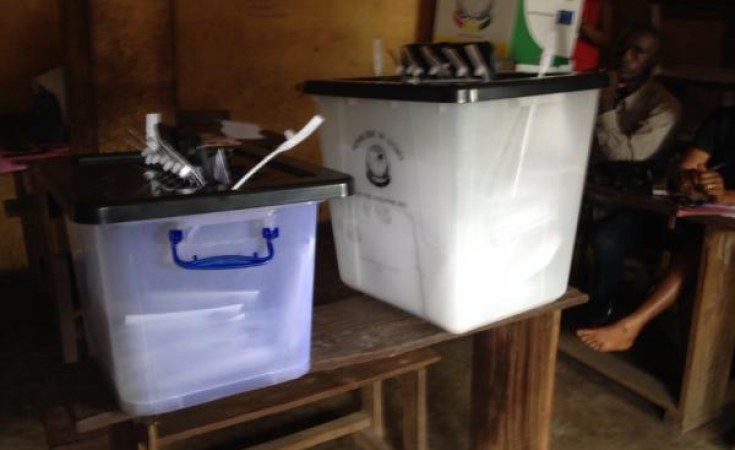 President Alpha Condé and the ruling party got the results they wanted. What now?

The final results from Guinea's highly contested double ballot on 22 March are in. In the referendum on a new constitution, 91.6% voted in favour. In the legislative elections, the ruling Rassemblement du Peuple de Guinée (RPG) won 79 of the 114 seats in the National Assembly.

The former vote paves the way for President Alpha Condé, in power since 2010, to remain in power beyond 2020. The latter victory provides him and his allies with a comfortable two-thirds majority in parliament, protecting them from any legislative deadlock.

None of this, however, means Guinea is about to experience a smooth and peaceful period of governance.

Unrest across the country

Since October 2019, the proposed referendum has further polarised Guineans between pro- and anti-Alpha camps. Those opposing the president have largely organised under the banner of the National Front for the Defense of the Constitution (FNDC). In protests leading up to the vote, at least 31 civilians and one gendarme are reported to have been killed. The political opposition announced it would boycott the elections.

On 22 March itself, at least ten more people died as demonstrators and militants attacked and blocked polling sites, burned voting material and ransacked various public offices. With the exception of the ruling party's stronghold of Upper Guinea, the unrest was widespread. "It is heating up a little everywhere in the interior of the country," a government official told AFP.

Discontent was particularly vehement in areas where residents tend to vote for the opposition. In the capital Conakry, hot spots concentrated along the Route Le Prince. In Middle Guinea, violent incidents have been reported from Pita, Labé, and Mamou. Even Lower and Forested Guinea, where government officials like to claim legitimacy, saw points of conflict, the most severe case being in Forested Guinea's regional capital N'zérékoré. Only a few weeks before, that city's prefect had announced he would cut any citizen's throat if ordered by the president. He was subsequently chased out of office by local youth and replaced.

In Guinea, the referendum has resuscitated an amalgam of political, inter-ethnic and religious conflicts. These can be contained, but initially appear worryingly similar to the communitarian violence that shook the region in 2013. In both cases, the number of fatalities remains unknown. As local authorities allegedly buried the bodies of victims on 25 March in a secret mass grave, estimates continue to fluctuate between ten and sixty fatalities.

As a result of the elections, diplomatic tensions are also now running high. Various governments and international institutions expressed concerns and criticism regarding the referendum. This included the West African bloc ECOWAS, the African Union, the UN, the European Union, and several individual governments. The French foreign ministry condemned, amongst other aspects, the "non-inclusive and non-consensual nature of these elections [which] did not allow the holding of credible elections".

The Guinean government has, in turn, questioned the judgements of external parties that were "not involved in either organising or observing the elections". Indeed, very few international observers were present during the vote. The AU, for instance, withdrew its observation mission prior to the initial date of 1 March, arguing that the electoral register needed to be updated first. The coronavirus crisis further dissuaded international bodies from sending observers.

This is partly because, more broadly, the FNDC - an alliance of civil society groups and opposition parties - has failed to provide a shared political vision beyond its anti-Alpha stance since President Condé came to power. Ahead of the 2020 elections, the opposition adopted a strategy of boycotts and protests. In previous elections in 2010, 2014, 2015 and 2018, opposition parties participated in elections, despite criticising the electoral management body. But none of these efforts have been as effective as earlier anti-government movements in 2007 and 2009 that mobilised Guineans for democratic change rather than against the president.

Part of this shortcoming may come down to a lack of political skill among opposition politicians and FNDC activists. But it more importantly highlights the widespread disillusionment with Guinea's "democracy" among potential opposition voters and the level of popular mistrust of political elites.

One decade after Condé's curious 2010 electoral victory, widely celebrated as Guinea's leap out of authoritarianism, the situation for many has not changed for the better. Poverty and the lack of basic services in this mining hotspot have largely remained the same. The influx of multinationals in bauxite mining regions like Boké have often done more to aggravate tensions - and accusations that the government "loots" local resources - than provide economic opportunities.

Moreover, competition over political power since 2010 has led to a considerable polarisation. This has been driven by political parties that are hardly democratic themselves and whose own internal clientelism and ethno-political concerns undermine their capacity for formulating nationally-inclusive ideologies.

Given this context, the 61% voter turnout on 22 March can be considered fairly high. To be sure, the enormous turnout in the RPG's stronghold of Upper Guinea played a crucial role in this figure - officially, over 99% voted in Kouroussa compared to less than 20% in Koubia - but it still means 2.85 million of 5.2 million eligible voters cast their ballot in favour of the new constitution.

It remains to be seen whether these numbers are credible and to what degree they imply a preference for Alpha Condé remaining in power. A survey by the Guinean Association of Political Science (AGSP) in Conakry showed that 11.3% of those who approved of the constitutional changes were nonetheless against a third mandate for the president.

In any case, the Condé regime is likely to consolidate its power upon the results. If this means a widening gap between Guinea's political and economic elites and its general population, it is unlikely to last long.