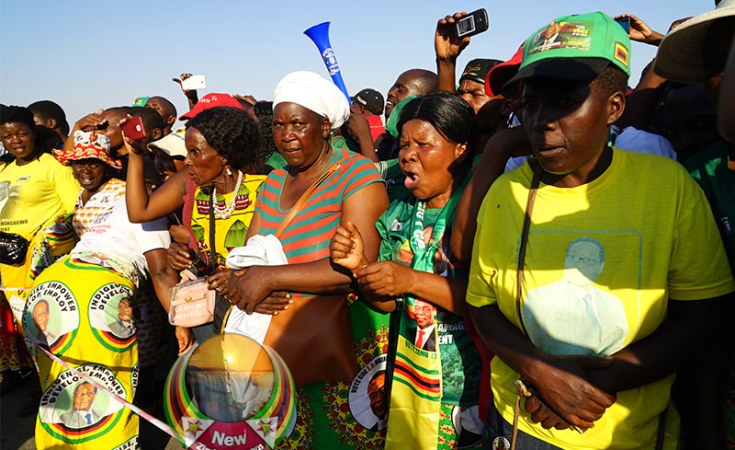 New Zimbabwe
Zanu-PF supporters at the airport for the return home of Robert Mugabe's body.
The Herald (Harare)

The Bankers' Association of Zimbabwe (BAZ) has announced plans to mobilise US$10 million through its members as part of corporates' further contribution to the fight against the deadly COVID-19 global health pandemic.

The novel viral disease, first detected in the Chinese city of Wuhan, has killed three and infected over 20 people in the country.

BAZ president Mr Webster Rusere said in a statement that in their April 2020 meeting, banks resolved to support the national fight against Covid-19 as an association in addition to individual members' initiatives.

Banks also agreed on the need to consider provision of foreign currency to cover importation of essential items such as test kits and reagents, with a figure of US$100 000 having been suggested, which equals US$5 555,56 per member institution at US$1 to ZWL$25.

"It has also been suggested that we identify service providers or agents to furnish us with invoices for items that we decide to donate and effect payment directly.

Meanwhile, BAZ members have been requested to forward a list of donations made or pledges, including the monetary values, to the association for consolidation of the industry's contributions.

A meeting with President Mnangagwa will be facilitated by the Minister of Finance and Economic Development at the end of this week or early next week for contributions and pledges.

Global corporate giants such as Alibaba, Roche and Amazon have joined ongoing global efforts to support the fight against Covid-19.

Zimbabwean corporates have thus not been left behind and have mobilised substantial amounts of money towards the provision of masks, gloves, hand sanitisers and other personal protective clothing.

Telecoms giant Econet Wireless Zimbabwe subsidiary, Ecosure, pledged to provide medical staff with PPEs, life and health insurance and transport to and from work daily, for the next 12 months.

Civil engineering company Bitumen World donated 40 000 litres of diesel to Government for use in the fight against the pandemic.

Previous Story
Over 5,000 Starve in Kadoma As Lockdown Intensifies
Next Story
COVID-19 Could Be Catalyst for Top-Notch Health Delivery System

Over 5,000 Starve in Kadoma As Lockdown Intensifies

COVID-19 Could Be Catalyst for Top-Notch Health Delivery System

Eight Million Zimbabweans Will Need Food Aid in 2021
Tagged:
Copyright © 2020 The Herald. All rights reserved. Distributed by AllAfrica Global Media (allAfrica.com). To contact the copyright holder directly for corrections — or for permission to republish or make other authorized use of this material, click here.