Guinea: Displaced and Destitute As Guinea Advances Dam Project With Help From China 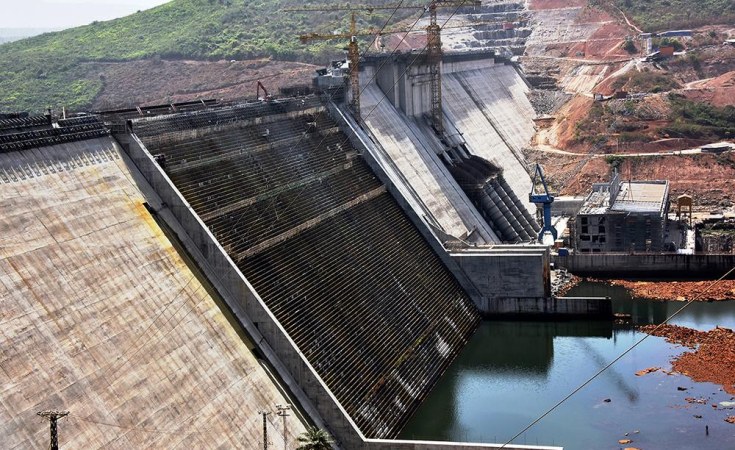 The Souapiti dam, Guinea’s largest hydropower project so far, has the potential to significantly improve access to electricity in a country in desperate need of reliable energy. But the 450-megawatt dam, part of China's Belt and Road Initiative (BRI), comes at a substantial cost to local communities. Thousands of villagers will lose agricultural land to flooding and, with it, access to food and income. Birgit Schwarz speaks with Guinean activist Mariama Barry about her work on Human Rights Watch’s new report and the need for Chinese investors to better protect the social and environmental rights of those affected by infrastructure projects.

How has the construction of the dam affected people's livelihood so far?

The vast majority of people who are being resettled are farmers whose families have exploited the land in the area for generations. Most are extremely poor. Having left their homes and with much of their land flooded or no longer accessible, many are struggling to feed their families. They used to grow almost everything they eat. But as the government hasn't given them any replacement land, they now have to find money to buy food from local markets. "With our fields gone," one farmer told us, "we're slowly selling our cattle to make ends meet."

Why does Guinea need this dam at all?

Guinea does need more access to electricity. Residential neighborhoods often only have power for a few hours a day. Rural access to electricity is particularly paltry. But it's unclear how much ordinary Guineans will actually benefit from the Souapiti project: some of the electricity will be used to fuel Guinea's booming mining industry and some will be exported. It's also not certain that communities displaced by the dam will ever get access to the electricity it generates - so far the resettlement sites where people are relocated aren't connected to Guinea's power grid.

What is the scale of the displacement?

Many of the affected villages are very isolated. When we began our research there was almost no publicly available information on their location. We identified them by generating a map overlaying the predicted size of the dam's reservoir on satellite imagery of the area. With many of the villages we visited situated along an unpaved and pothole-riddled road, it often took us several hours to drive from one village to another.

Where are the affected communities being resettled?

According to the Souapiti Agency, the government agency overseeing the resettlement, villagers were given a choice of possible resettlement areas and an opportunity to visit the sites. But the land chosen for resettlement belongs to other communities. Resettled families do not receive legal title to their new land, only a document recording the host community's consent to grant them land.

Given the scarcity of land and the size of the area that is to be flooded this might well lead to future conflicts. Already, displaced communities are saying they don't have enough cultivable land to meet their needs. Having heard complaints from resettled villagers, some of the communities yet to be displaced are trying not to move. But in the end they will have no choice. It is either leave or be flooded.

How are people being compensated for the loss of their land and crops?

None of the displaced communities we talked to had been compensated for the loss of their land, only for the crops and trees growing on it. The Souapiti Agency argues that because the land was customarily owned, people are not entitled to compensation, a position that violates international standards. The Souapiti Agency has not provided displaced residents with replacement farmland either. Instead, it promised to help them farm more efficiently on their remaining land and find new income sources, such as fishing. So far, however, displaced residents have not received any such assistance.

It's true that some people have received compensation for the loss of fruit trees and crops. But how this compensation was calculated is unclear. The receipts we have seen did not specify the number of trees a family possessed or if they were young saplings or already fruit bearing, which would affect their worth. Nor did the documents provide details about the number of crops recorded during an inventory. And many who have received compensation feel it does not reflect at all the value of what they have lost.

Are there ways to appeal?

People have written numerous letters to local as well as national authorities, but largely to no avail. The Souapiti Agency admits that during the initial process of displacement there were no formal complaints mechanisms in place, nor did people have access to independent legal advice. Recently, some efforts have been made by the dam management to find out from the communities what their grievances and needs might be. But not enough tangible efforts have been made to address the original problems with the resettlement, like finding communities replacement land and ways to restore their livelihoods. The same flawed practices continue.

What oversight obligations does China have as investor in the project?

The dam is part of China's Belt and Road Initiative (BRI), a trillion-dollar investment in infrastructure stretching across some 70 countries. Although the Guinean government is managing the resettlement process, the dam is being constructed by a Chinese company - China International Water & Electric Corporation (CWE), a subsidiary of the world's second largest dam builder, state-owned China Three Gorges Corporation - and is financed by China's state-owned Export-Import Bank (Eximbank).

Because of the criticisms of the environmental and social impact of some BRI projects, it's really important that Chinese companies and banks involved in these projects in Africa do their utmost to respect human rights standards. Our research found that CWE and Eximbank have developed their own policies that, in principle, commit them to more sustainable environmental and social practices. They should therefore more closely supervise the Guinean government's management of the resettlement process and offer their expertise and resources to ensure the rights of displaced communities are respected.

What needs to be done to ensure the Souapiti dam and future dam constructions are less devastating for affected communities?

First and foremost, given the human rights, social, and environmental impact of the different hydropower projects planned in Guinea, the government should assess whether all the planned dams are needed and sensible. Where dams are being built, the government needs to ensure that national and international norms and standards are being respected during the resettlement process.

Also, the compensation displaced people receive ought to be fair and transparent, and those who have been resettled should be given sufficient land to restore their livelihoods and be granted legal ownership of the land they are allocated. And lastly, it is vital that the government take the concerns of those affected seriously. If the grievances of those who are being displaced are ignored, large-scale infrastructure projects will make already impoverished communities even poorer.