Nigeria: 40% of Nigeria's Coronavirus Cases Recorded Last Week, Half of Deaths Too 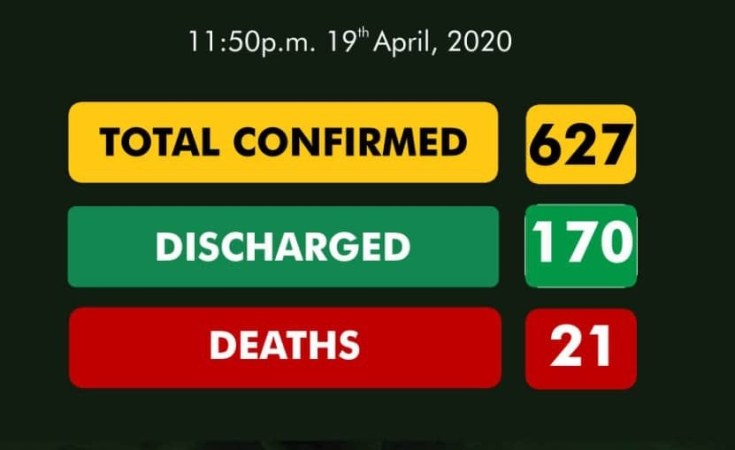 The coronavirus pandemic is still spreading and official data shows that the scourge is not stopping yet. Nigeria, like many other countries of the world, is yet to flatten the curve as the country recorded its highest weekly figure last week.

Also, last week, Nigeria recorded 223 coronavirus cases, 41 per cent of the total 542 recorded since the index case in February. The country also recorded nine deaths, almost half of the 19 deaths recorded so far.

The Nigeria Centre for Disease Control (NCDC) has ascribed the increased number of cases to increased testing of suspected cases.

Nigeria's tally of confirmed COVID-19 cases in the country rose to 542 cases on Saturday night.

The Nigeria Centre for Disease Control (NCDC) said so far, 542 cases of COVID-19 have been confirmed. Of these, 166 have been discharged while 19 people have died.

An analysis by PREMIUM TIMES revealed that Nigeria recorded the highest number of its weekly figures last week. Before this week's 223 cases, the highest weekly figure was 104, from April 5 to April 11.

Lagos remains the epicentre of the outbreak in Nigeria, while confirmed cases in Kano have been on the rise since the first confirmed case was announced in the state.

As of the time of reporting, 19 states and the FCT have confirmed at least a case of the virus.

Nonetheless, the Director-General of the agency, Chikwe Ihekweazu, said Nigerians should expect the virus to spread to all states.

"We have responded to Lassa smoothly and nobody shut down the country because it wasn't necessary, the response was fairly efficient.

"Now, COVID-19 is on a much larger scale - at the moment in 22 states but it will grow to every state in Nigeria, there is no reason why it won't - it is a respiratory virus," Mr Ihekweazu stated.

He said NCDC will continue to be transparent with its operations and emphasised that the virus "will circulate in Nigeria, absolutely no doubt."

PREMIUM TIMES, in this article, takes a look at how the cases increased last week.

On Sunday, five new cases of coronavirus were reported- 2 in Lagos, 2 in Kwara and 1 in Katsina.

As of 09:10 p.m. on April 12, there were 323 confirmed cases of #COVID19 reported in Nigeria. Eighty-five had been discharged with 10 deaths recorded.

On the same day, eleven new cases were reported in Lagos State.

He said the rise in the figures necessitated the extension, adding that one million households would be been added to the previous 2.6 million vulnerable households to benefit from the government's palliatives.

Some states like Kwara and Osun also extended the lockdown by two weeks. They gave the residents at least two days to restock foodstuff and other essential commodities.

Of the deaths reported last week are two medical doctors, Emeka Chugbo and Aliyu Yakubu. The Chief of Staff to President Muhammadu Buhari, Abba Kyari, also died during the week.

Mr Chugbo was a medical doctor at a private facility who died after coming in contact with a coronavirus patient, PREMIUM TIMES reported.

Also, Mr Yakubu had travelled to Lagos and returned to Daura after which he fell sick and was later confirmed to be infected with the virus.

He was admitted at the Nigeria Air Force Reference Hospital, Daura where he died.

The Katsina State Government announced on Friday that the wife and two children of the medical doctor, had tested positive to the pandemic.

Mr Kyari, the presidential aide, died on Friday and was laid to rest after a private burial was conducted in Abuja on Saturday.

The death of the 67-year-old got attention from leaders across the world and major stakeholders who sympathised with Mr Buhari.

As of 9:38 a.m. on Sunday, 2,340,539 cases of the pandemic have been recorded globally leaving 160,896 persons dead, data from worldometer, a website dedicated to providing real-time statistics, showed.

Notwithstanding, 600,703 patients have recovered and have been discharged.